Life in the Shadow of Coal 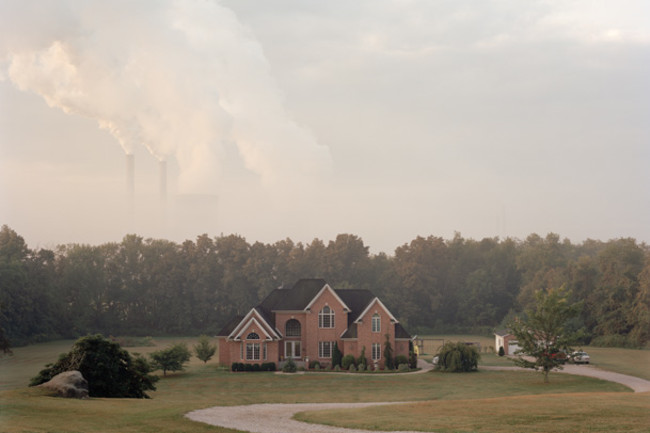 This photograph was made in a small town in Southeast Ohio, along the Ohio river, called Cheshire. To the left you can see the Gavin Power Plant, a coal-fired plant that provides electricity to Ohio, Appalachia, and the greater Northeast. The coal that is burned at Gavin Power comes in part from mountaintop removal mines in Appalachia. In 2002, shortly after federal health experts confirmed that the blue sulphuric clouds from the plant endangered the residents of the town, the American Electric Power company bought the entire village of Cheshire for $20 million, and the residents of Cheshire agreed to relocate. Photographer Daniel Shea has been working on a long-term project to explore the social and environmental impacts of coal in Southeast Ohio and Appalachia. About taking this photo, Shea writes: "I had driven by this house repeatedly over the course of a week. Sometimes I would stop and photograph it, but it never felt right. This is a residential street in a very small town, and people take notice of strangers. I received really dirty looks the first time I photographed it, it was noon and the sun and heat were unbearable. Eventually I made it back to the house at 5 AM. At that time you couldn't see the stacks, so I parked outside, waiting until they were barely visible an hour later. I knew while taking it that it would be "the" picture from Plume. This is a fairly atypical landscape -- I assume that the house belongs to a manager at the power plant as there isn't a lot of money in the region; it's mostly rural poverty."