Laughter Is OK Medicine, Unless It Kills You

Have a great Labor Day weekend, everybody! But be careful not to enjoy yourself too much. (This post on the dangers of laughter first appeared in December 2013.)

Careful with the bedside banter, doctors. Before you put on your best Patch Adams impression, you might want to consider whether your attempts at humor will ease your patient's discomfort or give him a protruding hernia. That's the conclusion of a review paper in the Christmas issue of BMJ that asks the jolly question of whether laughter can kill. The two authors, R. E. Ferner of the University of Birmingham and J. K. Aronson of Oxford University—no JK-ing, those are his real initials—take a tongue-in-cheek approach. They even give their research question an acronym: MIRTH (Methodical Investigation of Risibility, Therapeutic and Harmful). Ferner and Aronson scoured medical literature for studies having to do with laughter. After "excluding papers on the Caribbean sponge Prosuberites laughlini and with authors called Laughing, Laughter, Laughton, or McLaughlin," they were left with three categories of study. One had to do with the benefits of laughter, one with its dangers, and the third with medical conditions that have laughter as a symptom. Let's hear the bad news first. Laughter, according to various researchers, can lead to syncope (fainting), arrhythmia, and cardiac rupture. In asthmatics, laughing can trigger an attack. Laughing can even cause pneumothorax, a collapsed lung. People with cataplexy, a rare condition tied to narcolepsy, may suddenly lose all their muscle strength and collapse during a fit of laughter. An especially good laugh can make a person's hernia protrude, or dislocate someone's jaw. Among the more pedestrian dangers, breathing in sharply when you start to laugh can make you choke. Laughing in someone's face can spread germs. And, of course, there's the danger of pee coming out when you laugh, which doctors call "giggle incontinence." The authors also gathered a list of about three dozen medical conditions that have been reported—commonly or not—to cause laughter. These include epilepsy, brain tumors, multiple sclerosis, and kuru (a disease you are unlikely to contract unless you're a practicing cannibal). Now for the good news. Laughter may increase your pain tolerance, reduce stiffness in the walls of your arteries, and even lower your risk of a heart attack. In patients with chronic obstructive pulmonary disease (COPD), laughter can improve lung function. Fifteen minutes of laughter reportedly burns 40 calories, which fitness-wise makes it similar to a very slow walk (or, according to Fitness magazine, barbecuing.) Most strangely, one study used clowns to try to (indirectly) get women pregnant. Immediately after undergoing IVF, women were subjected to 12 to 15 minutes of entertainment by "a clown, dressed as a chef de cuisine." Among these women, 36 percent became pregnant, compared to just 20 percent in a control group. Perhaps aspiring clowns themselves, the authors can't resist throwing in a few puns of their own: "Laughing fit to burst can cause cardiac rupture." "Perhaps surgical patients derive no advantage from being in stitches." "It remains to be seen whether...sick jokes make you ill, [or] dry wit causes dehydration." I'll give them the benefit of the doubt and assume that, knowing the potentially serious side effects of laughter, they chose to spare their audience the risk. 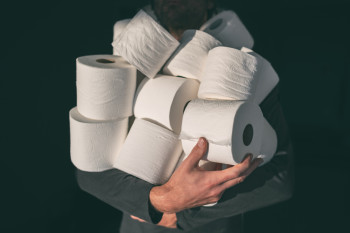 HealthWhy We Buy Weird Things in Times of Crisis