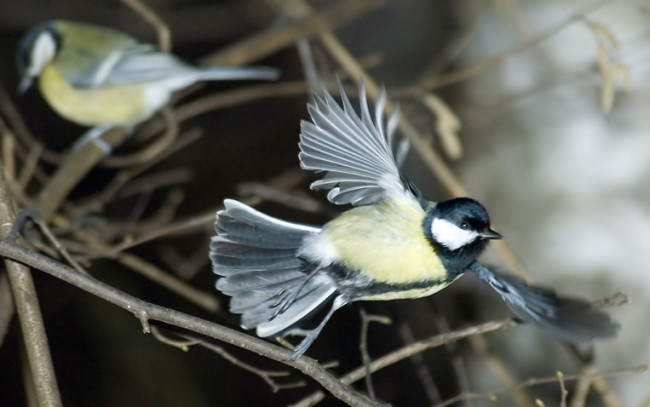 You snooze, you lose paternity. That's the message of a new study on wild birds in Germany. Males that wake up the earliest are able to sneakily mate with other birds' partners. Males that sleep in, meanwhile, get stuck raising young that aren't their own. Great tits (Parus major) appear monogamous at first glance. They stick with one partner and cooperate to raise their young. But, like many other birds that scientists call "socially monogamous," they sleep around. Great tit nests often contain eggs from more than one father. North Dakota State University biologist Timothy Greives knew from previous studies that songbirds often use the early morning for their trysts. This could mean that males who are true early birds have a better chance of finding extra partners—and guarding their own partners from other males. Supporting this idea, a study in blue tits showed that males have greater mating success outside their home nests if they start singing earlier in the morning. A bird's morning schedule—just like yours or mine—is tied to its circadian rhythm. Most living things have impressive internal clocks. If we were trapped in a dark room, we would keep sleeping and waking on roughly a 24-hour cycle. We keep these clocks running on time by calibrating them to daily environmental cues such as the sun. One tool we vertebrate animals use to regulate our internal clocks is melatonin. Our bodies release this hormone when it's dark, encouraging us to sleep. Greives and his coauthors decided to manipulate birds' melatonin levels, thereby screwing up their internal clocks, and see whether this affected their mating success. The researchers captured male great tits from the wild in Germany and implanted a little tube of melatonin under the skin of some birds. (Control birds got empty tubes.) The tube steadily released the hormone, rather than letting it cycle naturally in the birds' bodies. The researchers also used eyelash glue to attach a small radio transmitter to each bird's back, which let them track the activity of the animals. After releasing the birds back into the wild, the researchers monitored their activity to see when they got moving each morning and when they settled down for the night. They saw that birds with melatonin implants, whose bodies were receiving a steady dose of the hormone rather than the usual rise and fall, woke up about 10 minutes later than other birds. "Ten minutes is such a small difference!" Greives says. He thinks that although their internal clocks failed to rouse these birds, the sunlight woke them a few minutes later. "But mating in songbirds only take a few seconds, so a lot could happen during this time." To find out exactly what was happening, the researchers monitored nest boxes in their study area. They were able to observe nests from 10 normal males and 9 with melatonin implants. Once the eggs in these nests hatched, the researchers took a little blood from each baby bird and brought it back to the lab for paternity testing. Late-rising dads raised significantly more nestlings that weren't their own. The average untreated male had less than one nestling from another father in his nest. But the males implanted with melatonin averaged about two babies from other dads. During those few pre-dawn minutes when the birds with botched clocks were snoozing, their alert neighbors were cuckolding them. Although this was a small study, Greives says it's important because there hasn't been much other research relating circadian rhythms to reproduction, especially in the wild. "What we showed was that these rhythms may not only be important for survival, but may also play a role in reproductive success," he says. Greives wants to study female birds too, and find out how their preferences—and their own circadian rhythms—affect things. If females benefit from letting more males into their nests, they might not mind their partners hitting the snooze button.