Lasers Illuminate the Evolution of Flight 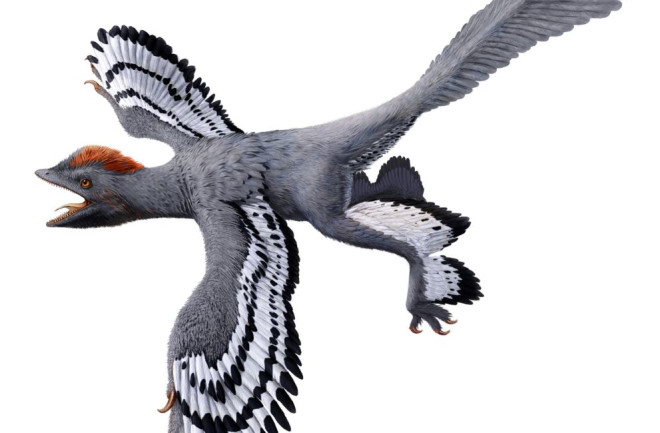 A reconstruction of Anchiornus, based on the new data. (Credit: Julius T. Csotonyi) Firing lasers at fossils continues to be a winning strategy for paleontologists. The new technique brings hidden details in fossils to the forefront, including remnants of soft tissue invisible to the naked eye. And a team of researchers from China is using the laser-assisted images to help piece together the evolutionary process that turned dinosaurs into the birds we know today. In a paper published Tuesday in Nature Communications, the team fixed its lasers onto a small feathered dinosaur called Anchiornus to better understand its morphology. The technique, called laser-stimulated fluorescence (LSF), causes minerals within the bones to light up in different colors, betraying the soft tissues they once were.

An arm of Anchiornus, imaged with laser-stimulated fluorescence. (Credit: Wang XL, Pittman M et al. 2017) With the new perspective, the researchers spotted a host of bird-like traits in Anchiornus, revealing that avian characteristics were present in some dinosaurs even 160 million years ago. They found that the dinosaur had drumstick legs, a thin tail and footpads that closely resemble those of modern chickens. In addition, Anchiornus possessed a structure called a propatagium, found on the front edge of birds' wings, which is crucial for flight. Under a microscope, these soft tissues remain hidden, but with the help of lasers, they stand out in psychedelic colors.

Two images showing the fossil under normal light (top) and LSF (bottom). The inset image shows the chicken-like footpads. (Credit: Wang XL, Pittman M et al. 2017)Anchiornus dates to the late Jurassic Period, which is when paleontologists believe birds were just beginning to appear. Finding bird-like features in this dinosaur allows researchers to better track this transition, in addition to offering hints of how vertebrates first developed the ability to fly. The propatagia they found in Anchiornus look very similar to those found in modern gliding birds, they say, giving them some clues to its function. It still isn't clear, though, if the feathery dinosaurs were able to get off the ground or if the structures merely represent an intermediate step on the path to flight.