Planetary scientists have waited years for NASA's InSight to record a "big" Marsquake, but it might have come as the lander runs out of time (and sun). 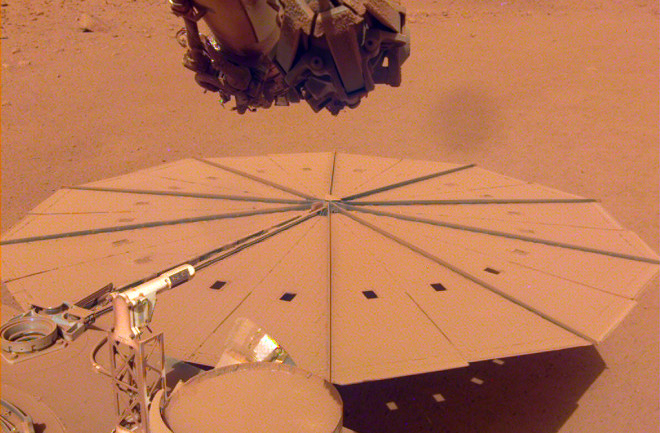 Time is running out for NASA's InSight lander on Mars. The plucky mission that landed on the red planet in late November 2018 and since then (with a few hiccups), it has been diligently recording seismic activity. The primary goals of InSight were to better understand how geologically active Mars might be and map out the planet's interior. By that measure, InSight was a massive success. Yet, it is the Martian dust that swirls in the air and settles on InSight's solar panels that is bringing it all to an end.

The realm of extraterrestrial seismology is a small place. The only objects in our solar system where we have put seismometers to measure quakes are the Moon and Mars. The Moon hosted working seismometers from 1969 to 1977. During that time they recorded thousands over that 8 year span.

On Mars, the first seismometers were on the Viking landers of the late 1970s. Unfortunately, those instruments were placed on the decks of the landers, so they didn't collect much useful data. That's because it helps for a seismometer to be directly in contact with rocks to record the imperceptible (to us) shaking from distant temblors.

It wasn't until the 2018 landing of InSight on the Martian surface that the next seismometer was deployed off Earth. This seismometer was swung off the lander and placed on surface so it could directly feel the waves produced by Marsquakes. Finally, planetary scientists were able to get data on just how seismically active Mars is today.

During its over 1200 sols (Martian days) on the surface, it has felt thousands of fairly small earthquakes that happened all over the planet. The instrument is highly sensitive because we weren't sure just how much or how little Mars might quake. Turns out, it isn't much.

The shaking felt by InSight's seismometer during a magnitude 5 Marsquake on May 4, 2022. Credit: NASA.

It wasn't until May 4, 2022 that InSight got a real "big one" on Mars, a magnitude 5. Before this, the largest recorded by InSight during the almost 4 years it has been on Mars was magnitude 4.2. All the rest produced shaking that you wouldn't likely even notice if you want standard near their epicentres on the ruddy surface of Mars.

By Earthly standards, the "big" Marsquake was minute. Our planet experiences thousands of magnitude 5 earthquakes each year -- that works out to an average of multiple per day. The largest historic earthquake was off the coast of Chile in 1960 and it was a magnitude 9.5, meaning it released ~31 million times more energy than InSight's record holder.

This difference in quake activity is linked directly to plate tectonics, or the lack thereof on Mars. There is little evidence that Mars has any active tectonics today. In fact, Mars may have only had a brief period (geologically speaking) in its early history where something akin to plate tectonics was happening.

Even in that case, there may have been only 1-2 tectonic plates involved. There is some evidence of features like our mid-ocean ridges and their magnetic stripes on the Martian surface. This might suggest that the crust was spreading billions of years ago on Mars. There is also the dichotomy between the low elevation northern hemisphere and higher elevation southern hemisphere of the planet. Maybe the difference is a remnant of those brief tectonic days.

A few places on Mars might still be geologically active even without tectonics. The area around Cerebus Fossae and Olympus Mons both show signs of "recent" activity (that being possibly in the past few million years). Faults and young lava flows might be all part of "hot spots" in the Martian mantle that cause the crust to swell and lava to form.

The End is Near

Sadly, unlike its cousins Opportunity and Curiosity roving the surface of Mars, InSight is not powered by a radioactive core. Instead, solar panels feed the electric power to keep the mission going. As dust from the Martian atmosphere settles, it covers the panels and reduces the power that they generate. Without a fortuitous wind storm to clean off the panels, InSight will no longer be able to stay powered and the mission will end.

Maybe NASA will get lucky and the panels will be cleaned off. Or maybe InSight is heading to join its other solar-powered relatives who have met their demise thanks to the Martian dust. In any case, we know much more about the geologic activity and interior of Mars thanks to the years InSight has been quietly listening Marsquakes millions of miles from Earth.