More than 30,000 volunteers hunted fungi from Mexico to Alaska for the massive bioblitz. 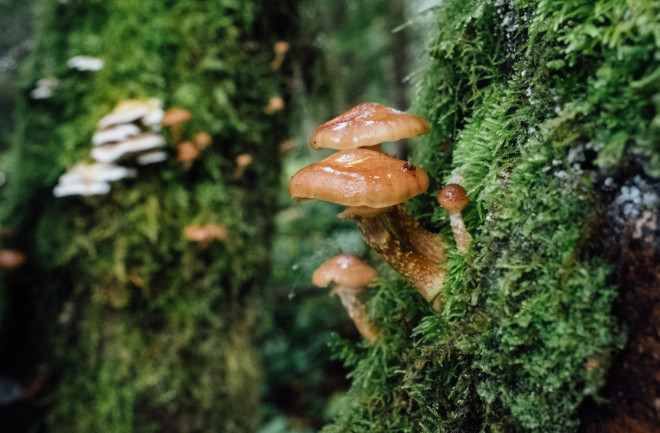 This fall, between September 15 and October 15, more than 30,000 volunteers combed through forests, fields and even their own backyards in search of the humble mushroom. They were participating in the Great North American FungiQuest, a massive bioblitz that aimed to find and identify as many fungi as possible in the span of just a month.

The event was an unqualified success, says Robert Courteau, who runs the nonprofit Think Fungi, which helped organize the FungiQuest. Altogether, the citizen scientists who took part collected nearly 150,000 fungi sightings, and identified almost 4,400 different species. Their findings were posted on a digital map, as well as to an online database, and the data they gathered will be used by mycologists who are studying the diversity of fungi across the continent.

Events like the FungiQuest are particularly important in the world of fungi research, Courteau says, because there are so few trained mycologists, and so little funding available to them.

“The big issue within mycology is that no one really pays for mycologists,” he said during a recent SciStarter LIVE! event. “We don't know what species we really have here [in North America].”

Even common mushrooms, which are just one type of fungi, are often understudied.

“Even the ones that we find in the grocery store, there's very little information on them,” Courteau said.

The solution to the problem starts with simply finding and cataloging the different kinds of fungi out there: what species they are, where they live, how they are doing.

“What we really need to do is get out there and find all the mushrooms that we possibly can,” Courteau said. There are tens of thousands of species of mushrooms in the world, and more than 120,000 currently described species of fungi. That includes species useful to humans like the Turkey Tail mushroom, which may help people who have cancer, and Chaga mushrooms, which also likely have medicinal benefits. Fungi also play an important role in ecosystems worldwide, helping plants use nitrogen, and even allowing trees to communicate with each other.

A Hunt for Fungi

Volunteers with the inaugural Great North American FungiQuest found close to half of the 11,000 known species in North America, and even turned up a few rare ones. An observation of a Flame Shield, an orange mushroom that grows on trees, won their prize for “Best Find” — just one of a number of prizes the organization handed out over the course of the event.

The FungiQuest saw participation from people all across North America, from Alaska to Mexico, and even from Cuba and Puerto Rico. There was a particularly strong showing on the East Coast of the United States, where fall is prime mushroom season. Courteau said future events might happen at different times of year to take advantage of mushroom seasons in other places.

As for anyone worried about encountering a potentially toxic mushroom while out hunting, Courteau said not to worry.

“Four in five aren't toxic, and then none of them in North America will harm you if you touch them,” he said.

And even of those that are dangerous, just two percent are actually deadly if consumed. So, if you’re planning on foraging a mushroom stew, it pays to know your fungi — but mushroom hunters not planning on snacking on their finds can rest easy.

Learn more about the FungiQuest on the SciStarter podcast.

Learn About and Find Fungi Today

If you’re interested in becoming an amateur mycologist yourself — or you just want to figure out what that mushroom in your backyard is — Courteau recommends getting involved with your local mycological society.

“There's quite a lot of mycology clubs and I definitely would recommend getting involved with one of them because they tend to have a good number of experts,” he said. “There's really no replacement for going out … with curious people to show you those fungi.”

Local groups can be particularly helpful because fungi species vary widely from region to region. The kinds of mushrooms in Louisiana, for example, may be almost entirely different than what you’d find in Pennsylvania. And because many mushrooms are hard to tell apart by sight alone, a veteran mycophile can be an invaluable asset if you’re just getting started.

The difficulty of identifying mushrooms has even made it hard for the science to progress, Courteau said.

“So many of these mushrooms actually look so similar to others that the only way of knowing that it's actually a different mushroom is through DNA sequencing,” he said. “We don't know what species we really have here [in North America].”

It’s one big reason why bioblitzes like the FungiQuest are so important. The field of mycology can benefit from even basic things like sample collection, and you don’t need to be a professional mycologist to help out.

“I'm gonna say 95% of the people who are contributing information towards mycology are not trained mycologists,” Courteau said. “They are amateurs who just absolutely love it and fell down a rabbit hole like myself.”

If you’re interested in becoming an amateur mycologist yourself, check out Think Fungi’s website, which has events, courses and more for the mushroom-curious. You can also check out citizen science projects like FungiMap and the Fungal Diversity Explorer on SciStarter, alongside hundreds of other citizen science projects. And if you’re hoping to learn more about a mushroom you’ve found, you might try out iNaturalist, which can identify fungi, plants and animals based on photos you submit.