Geologists look to LIPs to better understand what caused massive die-offs in the planet's past. 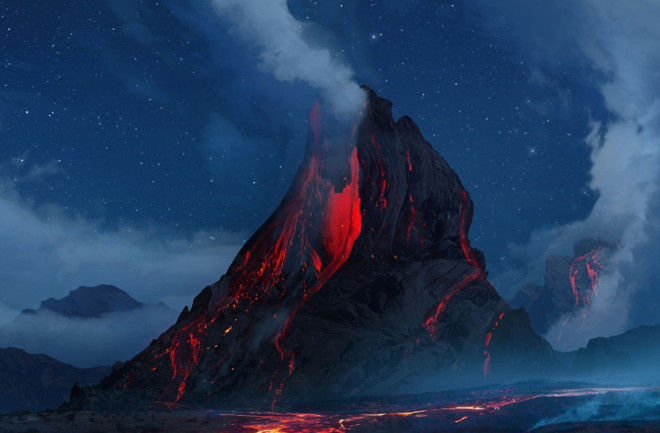 The Transantarctic Mountains split our planet’s southernmost continent into east and west, at times rising more than 14,000 feet high. Today, it’s a barren landscape of inhospitable rock and ice. But for the scientists who hike and camp this rocky spine, it’s also a portal to another Earth.

Park University paleobotanist Patty Ryberg and her colleagues are uncovering the fossilized remains of a lush forest that thrived in the Antarctic Circle some 260 million years ago during the Permian period. One type of tree, called glossopterids, dominated much of a supercontinent. Then they vanished in a geological instant.

The glossopterids didn’t die alone. About 90 percent of life on Earth was snuffed out in our planet’s biggest known extinction, called the Great Dying. What killed everything?

Scientists have long debated the causes of this event and Earth’s four other major extinctions, usually pointing to various volcanoes or asteroids. But it’s tough to precisely date rocks that old, so connecting a mass extinction with one particular impact or eruption is often controversial.

Now, a global campaign to map Earth’s ancient mega-eruptions, paired with advances in rock dating, is pushing us closer than ever to explaining why some volcanoes and asteroids kill and others don’t. Those results show that the size of an eruption or asteroid isn’t as important as the type of rocks incinerated.

One suspect behind several mass extinctions is a kind of enormous volcanic zone called a large igneous province, or LIP. Picture a flattish, layer cake-like volcano big enough to cover a country — or a continent. Amid the seemingly endless oozing lava, its internal plumbing system rips open miles-deep cracks like something from a bombastic action flick.

Every major extinction coincides with one of these eruptions. An LIP called the Siberian Traps formed just as the ancient forests Ryberg studies disappeared in Antarctica. Some 50 million years later, an LIP called the Central Atlantic Magmatic Province coincided with another mass extinction — one that eventually led to the rise of the dinosaurs. But while those eruptions lasted for perhaps a million years, the extinctions happened in much shorter time periods. Why?

Carleton University geoscientist Richard Ernst, who has studied LIPs for two decades, launched a large-scale effort in 2010 to find answers. Although ancient LIPs are now eroded and often hard to spot, Ernst found he could map the behemoths by examining their ancient magma plumbing systems.

His results were surprising: 20 previously undiscovered LIPs, all over the world. Incredibly, many formed billions of years ago and left no signs of a mass extinction. By using high-tech dating techniques to examine crystals in the rock, Ernst’s team has also narrowed down the timelines of these eruptions.

“Once we were able to start dating them — and to date them very precisely — then it was just stunning,” Ernst says. His team and others can now pinpoint LIPs to within 100,000 years of their eruptions.

These new discoveries also help explain what was happening at LIPs during mass extinctions. For example, as the Siberian Traps formed, huge ponds of lava pooled deep underground. This magma cooked surrounding sedimentary rocks as well as enormous seams of coal. As they burned, those organic matter-rich rocks released gases like sulfur and carbon dioxide. Once the pressure below was too much, miles-deep cracks ripped open on Earth’s surface, freeing the greenhouse gases. Our planetary thermostat likely rose dozens of degrees Fahrenheit. These same organics were burned and released in eruptions that wiped out Triassic life and gave rise to the dinosaurs, according to a Nature study last May.

“It’s a very short period of time for this to build up and have such a kill mechanism for a lot of life on the planet,” Ernst says. “These things have a wicked climatic effect.”

“My lesson from this is that the Earth can go through dramatic changes,” Ernst says. “The planet doesn’t particularly care about the biology on it, including humans.”

[This article originally appeared in print as "A Killer Connection?"]