Labels, Not Looks, Matter Most at the Dog Shelter 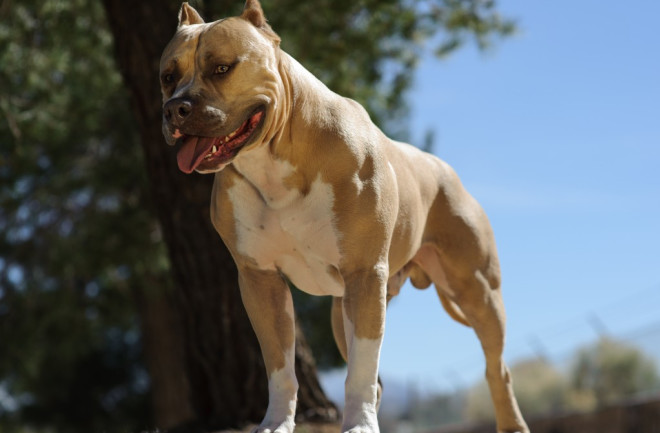 An American pit bull terrier. (Credit: David Robert Perez/Shutterstock) When potential dog owners visit a shelter, a whole range of factors affect which lucky animal they take home with them. Personality, activity levels, age and breed all go into the equation, depending on what pet owners are looking for. What pet owners are not looking for, however, are pit bulls. As a new study from researchers at Arizona State University shows, labeling a dog as a pit bull, all behavioral and personality observations aside, is enough to drastically alter how it is perceived. In a series of four studies, researchers examined how dogs labeled pit bulls were perceived, whether being labeled as a pit bull affected shelter stay length, and whether removing breed labels from shelters affected adoption rates. Their results were published Wednesday in the journal PLOS ONE.

Stereotypes in the Shelter

That pit bulls are contentious is certain — the number of fatalities as a result of pit bull attacks outnumbers those of all other dogs, and their use for bullbaiting and dogfighting has given them a reputation for being aggressive and uncontrollable. The debate over the competing roles genetics and environment play in pit bull behavior has gone on for some time. What is certain is that prevailing stereotypes about pit bulls and related breeds play an important role when it comes time to adopt. Compared to other breeds, pit bulls are adopted at far lower rates, and are more likely to be euthanized. Labels do matter when it comes to dog adoption, but the labels are often wrong. A 2015 study found that one in three dogs labeled as pit bulls by shelter staff were actually a different breed entirely.

In the researchers' first study, they established negative associations with pit bulls by asking participants to rate both pit bulls and other breeds on their levels of aggression, intelligence and ease of training, among other things. Pit bulls scored markedly worse than other breeds in all categories. Their second study looked at 15 pairs of dogs that were morphologically similar, one of which was labeled a pit bull, and one that was not. Dogs labeled as pit bulls remained in shelters for almost four times as long, despite looking the same as dogs thought to be another breed. This is significant because dogs that stay longer at shelters are more likely to be euthanized. A third study eliminated behavioral factors as influences of perceptions of aggression by comparing videos of dogs said to be pit bulls with videos of the same dogs whose breed was not given. Still, those labeled pit bulls were seen as less attractive options for adoption.

(RAYBON/Shutterstock) Their fourth and final study compared dog adoption rates at a shelter before and after breed labels were removed. With no labels on them, the adoption rate of pit bulls jumped significantly, while the adoption rates of other dogs stayed roughly the same or increased, indicating an increase in adoption levels overall.

The Power of Stereotypes

While this study does not address the issue of aggressiveness, it does show that many people base their decisions to adopt dogs on stereotypes. Their study eliminated differences based on image by choosing dogs that looked alike, but differed in name only. Perceptions of aggression and hostility based on appearance and behavior were shown to be irrelevant to most people when deciding between dogs at a shelter, whereas the label applied to the dog carried meaningful weight. In another demonstration of the variability of perception, the authors showed that when placed next to an elderly woman or a child, pit bulls were labeled more positively, while showing them next to a rough-looking male hurt their credibility. For potential owners, buying a pit bull may still be a risk not worth taking. But, given that labels at shelters are often wrong, perhaps a little objectivity is in order.