Kīlauea's Summit Collapsed Into Itself 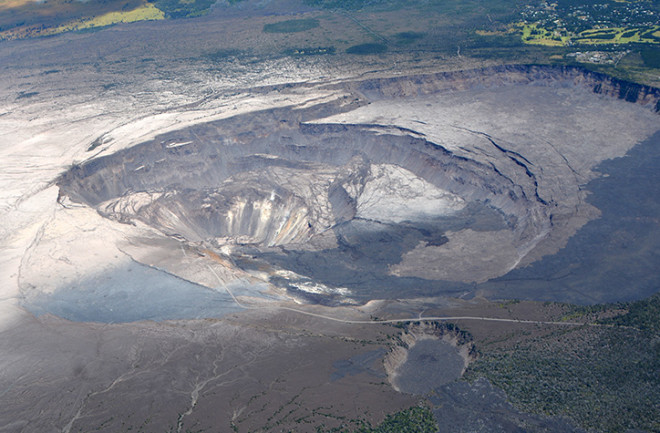 The new shape of Kīlauea's summit area, where the caldera floor collapsed over the course of the summer. USGS/HVO.

A few weeks back I wrote about how much the lower East Rift Zone of Hawaii’s Kīlauea had been changed by this summer’s eruption. Over half a cubic kilometer of lava came pouring out of the multitude of fissures that opening in Leilani Estates and the neighboring area and 850 acres were added to the Big Island from all those lava flows entering the ocean. It was one of the largest eruptions in the last few centuries at the giant volcano. Yet, the LERZ eruption might not have been the most dramatic change that happened at Kīlauea. To see that, we need to look at what happened at the top.

First, a little background on shield volcanoes like Kīlauea. They are huge edifices and at Hawaii, they rise from the seafloor to a summit that might be hundreds to thousands of meters above sea level. One common feature at the summit of these volcanoes are calderas, which are depressions that are caused by collapses of the land’s surface. Unlike volcanoes such as the ones found in the Andes or Japan, these calderas don’t need to be formed by a massive, explosive eruption — think Crater Lake in Oregon — but rather a gradual collapse. Some of the calderas on Kīlauea were formed by more explosive events, but many weren’t. Barðarbunga the volcano in Iceland that fed the Holuhraun lava field during 2014-15 also experienced one of these gradual caldera collapses, albeit one that was under a sheet of ice.

Many times, shield volcanoes have many calderas at the summit that are separate or overlapping. This view of the Kīlauea summit prior to the 2018 eruptions shows just that — a number of calderas formed by a gradual collapse. The large one is the Kīlauea caldera with the Halema’uma’u crater nested inside. The Kīlauea Iki caldera is just to the east of the large summit caldera (see the radar image, below).

Why are they so common? Mostly it is due to the plumbing underneath volcanoes like Kīlauea (see above). Magma rises from the mantle hotspot under the volcano, then is stored for a time in a reservoir under the summit area. The magma can then move out into the rift zones through tubes. So, when a big eruption like the summer’s LERZ eruption happens, we suddenly have a “leaky pipe” where lava leaves the summit and escapes at the point of eruption. All that magma that was holding up the summit in the reservoir is drained and the “foundation” of the land surface is pulled out.

So, what happened this year? If you check out the radar images of the summit taken by satellite (see above), you can see how from May to August, the crater inside Halema’uma’u grew with explosions and, at the same time, the land surface inside the Kīlauea caldera began to slump downward. Across the summer, there were “collapse events” where the summit would slump in fits and starts. Early on, these happened after explosions from the crater (which made the crater 7 times larger!) but as the summer wore on, the explosions died down while the collapses that formed the larger caldera around the crater continued. Each collapse released energy equivalent to a ~M5 earthquake, dropping the land 2.5 meters each time! That’s a little less than the height of a NBA basketball hoop … and it would drop like this every 30-40 hours for months! Check out this webcam video of one of these earthquakes taken from the HVO parking lot.

Part of the summit collapse during the summer of 2018 at Kīlauea. See the link below for the full video. USGS/HVO.

Part of the summit collapse during the summer of 2018 at Kīlauea. See the link below for the full video. USGS/HVO.

You can watch a timelapse of the collapse captured by the Hawaiian Volcano Observatory webcam (I put a snippet above). I have to admit, the first time I watched the full video, my stomach dropped like on a roller coaster. The eruption in the LERZ was erupting so much lava that the “support” at the summit was pulled out and the summit collapsed. In the end, the new summit crater was hundreds of meters deep and it sank into a new caldera that consumed the old Halema’uma’u parking loton the former edge of the summit caldera. Be sure to watch this UAV video showing how much the summit has changed in a few short months.

One of the questions that I have is the balance between the lava erupted way down at Leilani Estates and the collapse at the summit. Does the collapse represent the loss of the ~0.5 cubic kilometer of lava that erupted or more? If it’s more than that, why? Where is the the additional lava needed for such a big collapse? It’s just one of the many questions that we can ask about the summer 2018 eruption.

Right now, the collapse of the summit appears to have stopped along with the eruption in the lower East Rift Zone. Now, if new eruptions start in the LERZ or elsewhere, that might change, but for now, things are pretty stable up at the summit of Kīlauea. The warning level for the volcano is down to Yellow/Advisory, which is where it was before the 2018 eruptions. Whether or not the summit returns to anything like its previous configuration is anyone’s guess, but even if a new lava lake forms, it will be at the bottom of a new crater and caldera born from explosions and collapse that took months to happen.