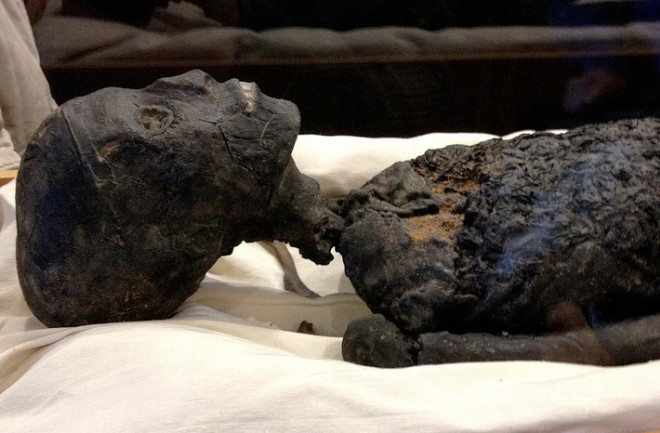 A replica of the mummified Tutankhamun.

King Tut, that most famous of mummies, may yet have some secrets to spill. Researchers have reanalyzed the teenage king’s remains and determined that his broken bones indicate he died after being hit by a chariot—and that, adding insult to injury, his mummification was botched, leading his corpse to spontaneously combust inside its sarcophagus.

The chariot-crash evidence came from a “virtual autopsy” of the body using X-ray and CAT scans. To reconstruct the accident, lead researcher Chris Naunton, director of the Egypt Exploration Society in the UK, enlisted the help of car crash investigators, reports the Daily Mail:

Dr. Naunton used the latest technology to reconstruct the death of the pharaoh and now believes a high-speed chariot crash was the cause of his death. He said: “We believe there is now a very distinct possibility that he was struck by a chariot wheel in the torso at high speed – enough to do him very serious damage. In fact, that’s what killed him.”

Not only did his skeleton have broken ribs on its left-hand side but it was lacking a sternum, or breastbone, and heart.

The other revelation, that Tut caught fire after death, came from a piece of flesh that an anthropologist apparently just had sitting around his office. It had been known since the 1960s that King Tut’s body had been burned, according to Raw Story. But the cause remained unclear.

The new study included other chemical tests on the fragment of flesh, and the results were analyzed by fire investigators.

They concluded that a shoddy mummification was to blame—maybe because embalmers were rushed, or because the pharaoh’s body was so mangled. The combination of oxygen, embalming oils and linen in the sarcophagus essentially caused the mummy to spontaneously combust.

Previous theories for how the boy-king had died were many and varied, according to the Telegraph:

Although there has been speculation that Tutankhamun was assassinated or killed in conflict, many experts believed his death was the result of an accident or illness. A CAT scan taken in 2005 shows that he had suffered a left leg fracture shortly before he died, and that the leg had become infected. DNA analysis conducted in 2010 showed the presence of malaria in his system.

The new findings — part of a Channel 4 documentary airing Sunday, November 10, in the UK — may help put King Tut’s story to rest. But then, as the centuries-old history of grave-robbing attests: no mummy can lie undisturbed for long.