Killer Killer Whale "Tilikum" May Have Been Over-Stressed; Won't Be Euthanized 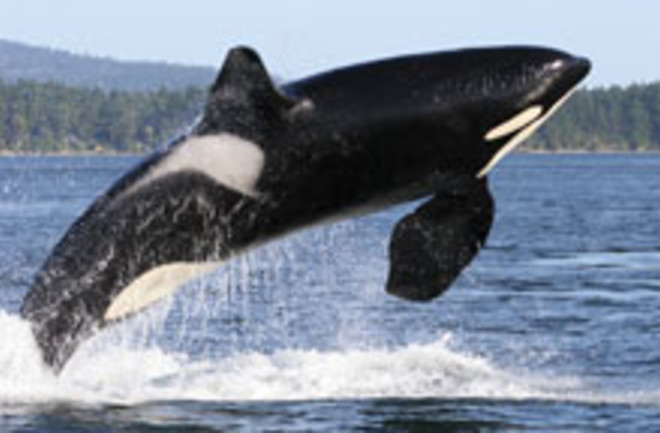 There was no "Shamu Show" at SeaWorld today as people at the park mourned the death of Dawn Brancheau, the 40-year-old trainer apparently pulled to her death by Tilikum, one of the multiple killer whales the park uses under the name Shamu. As details continue to surface, park owners must decide what to do with the 12,000-pound aquatic animal. First off, the public should keep in mind that this incident is highly unusual, says Wayne Perryman of the National Oceanic and Atmospheric Administration. He studies orcas (another name for killer whales) in the wild and says that they've never been known to attack a person as Tilikum has done, pulling Brancheau under water until she drowned.

Perryman points out that other captive animals are known to snap and turn on their trainers—not just killer whales. "I think this isn't really a killer whale issue," he said. "It's when you're dealing with large mammals in a captive situation'" [National Geographic]

. Nancy Black of California’s Monterey Bay Whale Watch notes that Tilikum had a more aggressive track record than other orcas, perhaps because of his history.

He was captured near Iceland in November 1983, according to Discovery News, and kept in small tanks for most of his life. “I’m sure it was a high stress situation,” says Ms. Black. “Being kept in a small tank like that, especially because he was originally from the wild" [Christian Science Monitor]

. And this is the third human death with which the killer whale has been linked. The first was in 1991, when a trainer at Sealand of the Pacific fell into the tank with Tilikum and two other orcas.

In 1999, a homeless man sneaked into the whale tank at Sea World in Orlando after hours. The man died of hypothermia, although bruises and bite marks suggest that the orca may have had a role in his death [Christian Science Monitor]

. This time, though, a crowd of people was on hand for the tragedy. SeaWorld has said it will evaluate the orca, but added that it has no plans to euthanize the animal. And Brancheau's friends say that though they miss her, she knew the danger of her job.

Earlier today, Jack Hanna, a well-known animal expert with ties to Central Florida, spoke on national television about the tragedy, saying animal experts such as Brancheau are aware of the risks, as well as the benefits, of working with live animals [Orlando Sentinel]