Killer Eyes: How Crocodiles Stay Still and Scan the Horizon 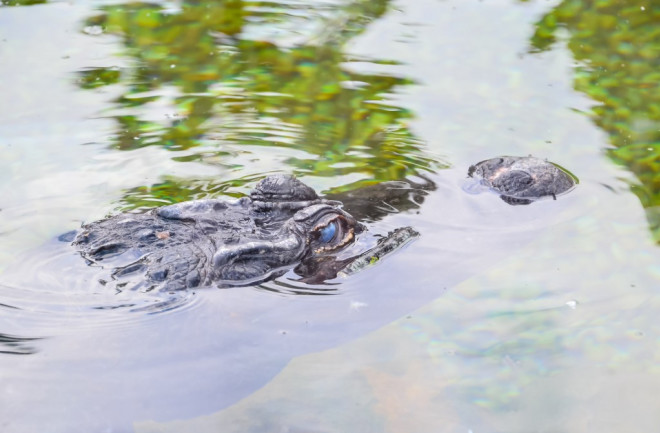 (Credit: underworld/Shutterstock) Crocodiles are insidious hunters — they lurk just beneath the surface of the water with just their eyes and snouts poking out as they wait for unsuspecting prey to amble by. Their eyes function almost like periscopes on a submarine, allowing them to conceal their scaly mass while keeping an eye on the world around them.

Seen from the surface of the water, the world must look somewhat odd to a crocodile — their field of view lies even with the line between water and sky. But, as new research shows, crocodiles have adapted to become masters of scanning the horizon. Researchers from The University of Western Australia examined crocodiles’ eyes and found a crucial difference in how the light-sensitive rods and cones are arranged compared to most animals. The key distinction is in a part of the retina called the fovea — a small divot in the back of the eye with a high concentration of photo-receptors. It allows us to focus in sharply on a small area. In most animals, these photoreceptors are arranged in a circle, allowing us to focus our vision on a specific point like a word in a line of text, or a face in a picture. In crocodiles, this crucial collection of photoreceptors is laid out in a horizontal line even with the horizon, perfectly aligned with their field of vision when hunting. Based on the structure of their fovea, this means that crocodiles are able to focus on a large swath of the horizon without moving their heads, allowing them to stay perfectly still while waiting for prey. Call it killer peripheral vision.

Not All Crocs the Same

The researchers also found a difference in the kind of photoreceptors that saltwater and freshwater crocodiles had. The saltwater crocs eyes were more attuned to blue light, while their freshwater cousins were more receptive to red light. This makes sense, because freshwater lets through more light of longer wavelengths, or reddish light, while saltwater allows for a greater diversity of wavelengths. The researchers say that that provides some evidence that crocodiles use their eyes underwater, something that was previously debated due to the fact that they cannot focus well while submerged. They published their research last week in the Journal of Experimental Biology. The researchers say that the kind of elongated fovea found in crocodiles has never been seen before. Of course, few other animals hunt like crocodiles do either — lying motionless just below the surface and keeping a sharp eye on their surroundings. So just remember, even if you don't see the crocodile, it can probably see you.