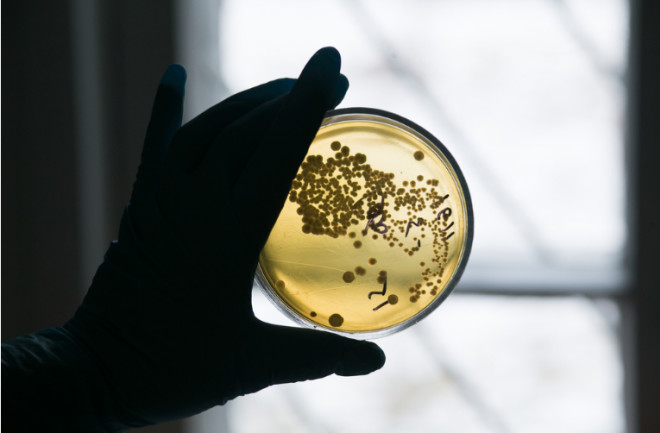 Gene editing has received a lot of press recently, thanks to a slew of recent advancements that allow scientists to do ever more with plant and animal genomes. Techniques, such as CRISPR-Cas9, are opening the doors to novel genetically modified crops (GMOs), stem cell research, synthetic biology and even experiments with human embryos.

However, with this explosion of research has come intense scrutiny. Modifying DNA, the blueprint of an organism, carries with it powerful implications and unknown risks. Just last week, an international summit on human gene editing was convened in Washington D.C. to discuss ethical guidelines for future gene editing research, among other agenda items. One of the biggest concerns about genetic modification is the potential for engineered microbes with altered DNA to escape the lab and wreak havoc on an unprepared world. Like Frankenstein’s monster, the fear is that these organisms may prove harmful to humans and difficult to stop. Fortunately, scientists have been working hard to ensure this nightmare scenario doesn’t occur.

To keep gene modifications on a short leash, researchers have started developing “kill switches,” or mechanisms built into the genome that terminate a cell if it leaves the lab. Most of these switches work by altering an organism’s genome, making it dependent on a lab-supplied compound to survive. If the organism leaves the lab, its life-giving supply is cut off. Such mechanisms have, until now, required researchers to completely modify the organism’s genome, a costly and time-consuming endeavor. However, researchers at MIT created a genetic circuit dubbed “Passcode,” which can be simply inserted into an organism’s DNA. Forgive the writer’s analogy, but the researchers’ new method is akin to inserting a new sentence into this article rather than re-writing the entire thing.

“In our case, we don’t need to do large-scale changes. We can just plug in these regulatory circuits that can function as safety switches and kill switches without changing the background genome,” says James J. Collins, a professor of biological engineering at MIT and a co-author of the study, which was published Monday in the journal Nature Chemical Biology.

Working with E. coli bacteria and building off of another genetic circuit previously developed by the same team, the Passcode switch adds several genes to an organism’s DNA. One gene within the cell produces toxins, and a second inhibits the function of the toxin-producing gene. The toxin-inhibiting gene is regulated by a specific molecule chosen by the researchers, either artificially supplied in the lab or found in the environment. Without this specific molecule, the inhibiting gene shuts off, and toxins kill the organism.

While this mechanism is similar to previous attempts to build kill switches, the researchers advanced the idea by requiring not one but three molecular inputs for cell survival.

“In the case of the Passcode, you actually have three different molecules, two of which need to be present and one of which need not be present in order to keep the proteins in the right combination and the cell in the live state,” says Collins.

The team repeated their experiment with three different molecules as inputs, and produced similar results in each trial: The bacteria stayed alive while in the presence of the necessary input, but quickly died off when the input was removed. By breaking their circuit into two parts, one that receives input molecules and one that binds to DNA, they were able to create a hybrid molecule that contains interchangeable parts.

“This is yet another step forward towards better biosafety and biocontainment based on certain aspects of existing technology,” Guy-Bart Stan, a synthetic biologist at Imperial College London who was not involved in the study, told The Scientist.

The capacity for modification and customization also expands the range of uses for the Passcode circuit.

Collins envisions a range of uses for his team’s genetic circuit, including in genetically modified bacteria that could help humans fight disease from the inside. Genetically modified organisms, for example, could seek out harmful bacteria and then produce compounds to combat them.

“One could envision a day quite soon when you’ll take synthetic probiotics, consisting of engineered microbes, which will sense different aspects of your body, report on it and potentially produce molecules as needed to address your health needs,” says Collins.

Incorporating kill switches into these microbes would be an essential step in clearing them for use in humans.

“These types of switches now afford safety on two counts. One, should the patient have an adverse reaction to a microbe our switches would enable one to very quickly and very effectively eliminate it from the patient’s body,” says Collins. “Two, one would like to ensure that after the microbe has done its job and leaves the patient’s body, that it itself is programmed to self-destruct so that it doesn’t enter the water supply and contaminate the environment.”

At the moment, the team’s Passcode-contained bacteria are functional for two or three days — any longer and they succumb to mutations that render them useless. Going forward, Collins would like to test his kill switch in different types of bacteria in various settings, both inside and outside of the human body.

Whether as molecular watchdogs in humans or customized for industrial processes, new and more refined kill switches take us another step closer to safely and effectively modifying the genome.