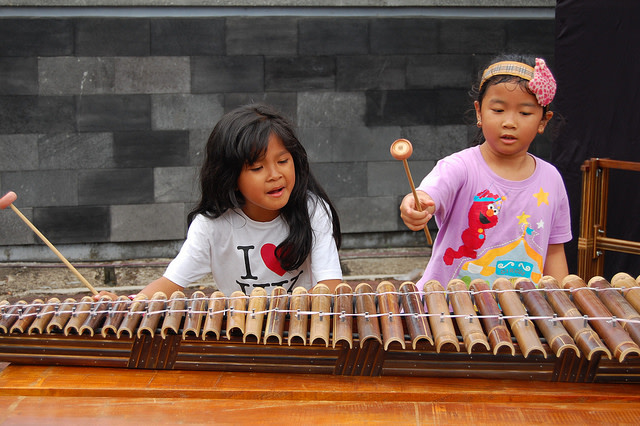 "I've always wanted to have a neighbor just like you," Mister Rogers used to sing from millions of television sets while changing his shoes. But even if Fred Rogers wanted to be everyone's neighbor, most people are more selective. Whether they choose to hang out with each other may depend on their gender, race, political affiliation, or even favorite sports teams. A new study shows that these preferences start early: kids as young as 4 years old want to be friends with other kids who know the same songs they do. At Harvard University's Laboratory for Developmental Studies, Gaye Soley and Elizabeth Spelke gathered two dozen children who were 4 or 5 years old. On a screen, kids looked at photographs of other 5-year-olds' faces (all Caucasian). The researchers displayed the photos in pairs. For each photo, they played a digital melody and claimed it was that kid's "favorite song." After each pair, the researchers asked their young subjects, "Which of these children would you like to be friends with?" In the first experiment, there were six pairs of photos. Within each pair, one kid's "favorite song" was a familiar Western tune like "Mary Had a Little Lamb" or "Row, Row, Row Your Boat" or "You Are My Sunshine." The other kid's favorite was a Balkan folk tune. Subjects heard the melodies in synthesized instrumental versions, without lyrics. Most of the subjects said they would rather be friends with the kids who liked the familiar tunes. (Researchers had checked with parents ahead of time to make sure the subjects actually knew these songs.) But was the important thing that the tunes were familiar, or that they were Western-sounding? To find out, the researchers repeated the experiment with a new batch of subjects. This time the "favorite song" of one kid in each onscreen pair was a familiar tune, while the other kid's favorite was an obscure Western folk tune from the 18th century. And in a thirdexperiment, the favorite of one kid in each pair was an 18th-century Western tune, while the other's was a Balkan tune. It didn't matter what culture the song came from, the researchers found. Kids wanted to be friends with other kids who liked songs that were familiar to them. Unfamiliar but Western-sounding songs didn't produce the same effect. The researchers next wanted to know whether it was important that the kids in the pictures liked the songs, or only that they knew the songs. They did another series of tests to find out. This time they recruited kids age 4 to 6 at Boston's Museum of Science. In one test, an experimenter showed kids a pair of photos, then said something like: "This is Ashley, and this is Laura, and here is a song I played for them." Then the experimenter played a song—either a familiar tune or one of the old-timey Western folk songs. Afterward, the experimenter said, "‘Ashley knows this song, and Laura doesn’t...Which one of these children would you like to be friends with?” In another experiment, the kids were told that Ashley likes the song and Laura doesn't, for example. For the final version of the experiment, they were told that Ashley knows the song but doesn't like it, while Laura didn't know the song before, but likes it now. How did all this shake out? In general, kids preferred other kids who shared their knowledge of songs. Whether those kids liked the songs didn't matter as much. Soley, who's now at Bogaziçi University in Turkey, points out that adults get their musical knowledge from many sources. Young kids are likely to learn "Mary Had a Little Lamb" from a direct interaction with another person. But an adult might learn a new song online, on the radio, on TV, or by hearing it played in a café or bar. So shared musical knowledge can cut across a lot of other boundaries between social groups. "Nevertheless, shared knowledge still is crucial for establishing a common ground," Soley says. "One might expect shared knowledge to affect adults' social choices as well as children's." We might choose our friends, in part, based on the cultural knowledge we have in common—whether that's the latest Drake single or classic PBS kids' programming.