Kiddie Pool-Sized Shell of Extinct Turtle Found in Colombian Mine 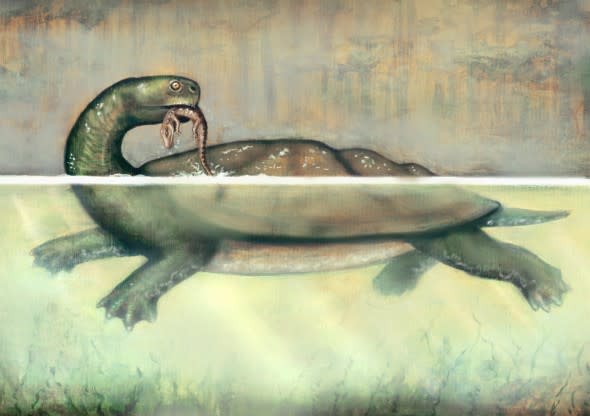 Don't mess with this.

are not just a consumerist fantasy:

is an extinct turtle with a 10-inch skull and, more impressively, a shell that rounds out to five feet, seven inches in length. That really is big enough to dig around in. That's also the same height as the grad student who found the 60-million-year-old fossil in a Colombian mine. The turtle was so big that it probably drove off other turtle competitors and dominated the lake by itself, scientists say. They think that C. cofrinni preyed on mollusks and small reptiles, like the one depicted in this artist's interpretation. If we're going to be spending time in the belly of a turtle, though, we'd personally prefer it to be full of sand and toys rather than chewed up food. [via Wired