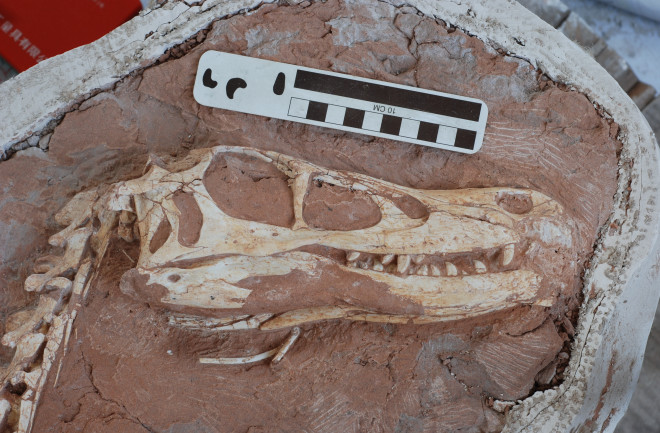 A Linheraptor skull. (Courtesy Michael Pittman) In the vast emptiness of the Gobi Desert, the days are long and weary, and the searing sun does little to boost the spirit, even with the prospect of discovering new dinosaur species on the horizon. Exhaustion and sunstroke are a hard-working paleontologist’s enemies out there, and staying well-hydrated is of utmost importance. Thus, an enemy to the paleontologist’s productivity emerges: frequent “relief” breaks out in the wilderness. But sometimes a diversion from the task at hand leads down the road to discovery. During one such “relief” break in 2008, Michael Pittman and his international team of fossil hunters made the history books while prospecting in the region of Bayan Mandahu in Inner Mongolia, China. Pittman is the current head of the Vertebrate Paleontology Laboratory at the University of Hong Kong, and has spent years scouring the Gobi for fossils.

The rugged landscape of Bayan Mandahu. (Credit: Courtesy Michael Pittman)  “After two minutes I heard my colleague calling me over and hoped it had nothing to do with his toilet break,” Pittman recalls. “He had walked down the gully and said he found a claw poking out of the cliff. After ascertaining where he took his 'break' we proceeded to walk to the suspected claw and push away the soft rock entombing it.” The team could barely believe their luck. “When it came out in one piece we looked at it and had an are-you-thinking-what-I'm-thinking moment that ended in wild, primeval celebrations,” says Pittman. The team had stumbled across a new species,

, which is closely related to well-known dromaeosaurids such as Velociraptor and Deinonychus. It was preserved in a soft, red sandstone and required a bit of labor to get it out of the ground. They covered the entombed specimen in a plaster jacket to protect it throughout its trip back to the lab.

An artistic representation of Linheraptor exquisitus, which was discovered on a bathroom break in the Gobi Desert. (Credit: Julius Csotonyi) The pay-off was enormous, both personally and for research, but the desert certainly doesn’t yield its secrets so easily.

Buried in the Gobi

The Gobi Desert is one of the largest on the planet, covering 500,000 square miles of Central Asia. It is dominated by vast stretches of featureless wastelands as far as the eyes can see, sculpted by flash floods during the summer and high force winds. It’s a relentless environment, with extreme temperatures ranging from minus 40 degrees Fahrenheit in the bitter, snowy winters to 122 F in the scorching summers. The Gobi is one of the last places on the planet you might expect to find dinosaurs, but the crust tells a different story. Rocks here are from the Jurassic and Cretaceous periods, and they preserve a wide variety of ecosystems. The discoveries of crocodile, turtle and shark fossils through the years suggest that the climate was once very warm and wet, similar to a modern tropical ecosystem. Today, the Gobi sits in the rain shadow of the Himalayan Mountains, and is surprisingly good for finding fossils – if your timing is right. The lack of vegetation means rocks are stripped away and reburied, forcing paleontologists to play a game of fossil whack-a-mole. “Sites that were unfruitful one year can expose entire skeletons in subsequent years,” says Pittman. “For example, in one site we found four nests of eggs that had all been exposed to the elements as if they were just laid on the desert sand in modern times.”

The new species discovered during the fortuitous bathroom break was actually the second new species the team literally stumbled upon at the tail-end of their expedition, which had, to that point, been agonizingly dino-less. Before their luck changed, Pittman and co. were exhausted and had nothing to show for their efforts. He recalls being red hot in more ways than one. “I remember giving Mother Nature several colorful descriptions of what I thought about the working conditions,” Pittman reminisces. “We came across a dried-up stream bed covered in small pebbles of harder rock (called nodules) that were fun to kick, the perfect companion to (my) descriptions. As I placed my foot on the ground, my companion told me to freeze — he said there was a fossil under my foot.” They had discovered a small and highly unusual dinosaur known as Linhenykus monodactylus. This bizarre animal had tiny forelimbs and is known as an alvarezsaurid. Linhenykus is the only non-bird-line, one-fingered dinosaur that we know of. Other alvarezsaurids have one longer finger and two much smaller ones. These small fingers are known as ‘vestigial’ features, which means they are functionally redundant, and were eventually lost in Linhenykus just like feet in modern snakes and whales.

The peculiar anatomy of Linhenykus monodactylus is captured in this artist's rendition. (Credit: Julius Csotonyi) The skeleton had been completely weathered out of the rocks, and was preserved in more of the small, hard nodules. It was a simple case of bagging them up to transport back to the lab for further research.

“The desert had made us earn both of these discoveries that year and has done so most years since,” says Pittman. To date, Pittman and the team have produced three research papers documenting findings from the Gobi Desert, and they’ve provided new context to describe the evolution of the mostly-carnivorous theropod dinosaurs. The team, known collectively as The Inner Mongolia Fieldwork Project, hopes to continue deciphering the ages of the rocks and the differences between the ancient ecosystems they preserve.

Michael Pittman "speaks" with local resident of the Gobi Desert. (Courtesy Michael Pittman/The University of Hong Kong)  Pittman is working on a more detailed article on Linheraptor, as he believes its unusual anatomy might play an important role unlocking evolutionary relationships between birds and their theropod ancestors. He’s off again to the Chinese Gobi this summer. This time though, he’ll be scouring rocks from the central northern position. “We are hoping that this site will represent a new ecosystem that will yield new dinosaur species. We're very excited,” says Pittman. One can only wonder how they’ll end up discovering the next new species.