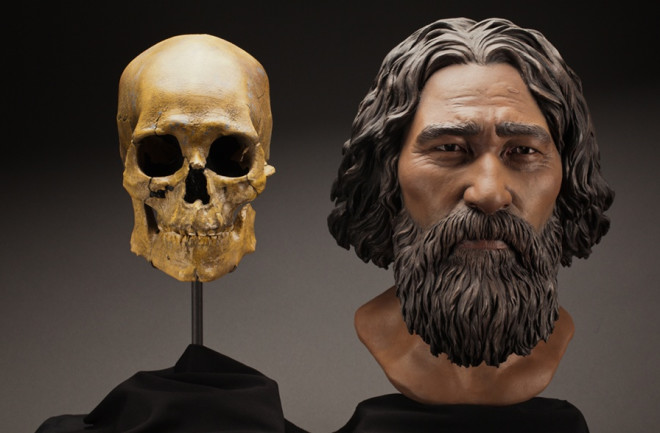 (Credit: Brittney Tatchell/Smithsonian Institution) Unearthed in 1996 after part of his skull was found along the shores of the Columbia River in Washington, Kennewick Man, a 9,000-year-old Paleoamerican, would soon be regarded as the most important human skeletal discovery in American history.A Crisis of Ancient Identity When two college students reported that they had found a skull fragment in the river, scientists responded quickly. After searching for and collecting nearly 300 other pieces of bone, they were able to determine that the set of remains was one of the oldest and most complete human skeletons ever recovered. Kennewick Man became the subject of an intense legal feud between the scientists who wished to continue studying him, and members of local Native American tribes who believed that he was an ancient ancestor and should therefore undergo a sacred burial in his homeland. And that's where the trouble began. As Discover reported in 2015:

The United States Army Corps of Engineers maintained the land where Kennewick Man was found; furthermore, that particular stretch of the Columbia also fell within the borders of sacred homeland claimed by five Pacific Northwest Native American tribes. Shortly after scientists confirmed Kennewick Man’s age, the Army Corps took possession of the skeleton and ended further studies, a move that provided the spark for a prolonged battle in the courts. In 1990 George W. Bush signed the Native American Graves Protection and Repatriation Act, as reparations for the disrespectful manner in which Native American remains were treated in the past. The law serves as a means for Native Americans to gain possession of cultural items – bones included – that once belonged to their ancestors if cultural affiliation, or a connection to their lineage, could be established. NAGPRA served as the legal umbrella for the Army Corps’ seizure of Kennewick Man. The government’s actions inspired a band of eight scientists, led by anthropologist Douglas Owsley, to take a big risk and sue the United States government to gain control of the remains for the sake of scientific inquiry. In 2000, the then-Secretary of the Interior Bruce Babbitt determined that the remains belonged to the tribe, and ordered their return. However, in 2002, the scales shifted in favor of the scientists. U.S. Magistrate John Jelderks ruled that the skeleton wasn’t related to Native Americans based on its physical features, and therefore that NAGPRA didn’t apply in this case. The remains were turned over to the scientists, and the decision was upheld in appeals. The decision was a blow to the five tribes. “Scientists have dug up and studied American Indians for decades,” Umatilla tribe spokesperson Armand Minthorn wrote in 1996. “We view this practice as desecration of the body and a violation of our most deeply-held religious beliefs.”

In 2004, the United States Court of Appeals for the Ninth Circuit rejected the appeal from the U.S. Army Corps of Engineers as the Kennewick Man’s skull bore a closer resemblance to those of Asian and Polynesian descent than that of a Native American. Kennewick Man’s remains were cared for at the Burke Museum in Seattle, and were not displayed. Since the 2004 decision, scientists have studied the remains extensively and learned much about this man.

A Twist In DNA

Genomic testing was not a factor during the preliminary litigations, but years later when the gene technologies were accessible, a controversial study would reopen Kennewick Man’s case, and then close it once and for all. The study, published in the journal Nature in June 2015, showed that previous analyses claiming the Kennewick Man was of Asian origin were incorrect. Though he could not be linked to any particular nation, his genome was Native American, and likely from the people groups in the Pacific Northwest. In December 2016, President Obama signed a legislation that would allow the Kennewick Man to be returned to his homeland and laid to rest.

The Ancient One Sleeps

Last Friday, over 20 years after his initial discovery, dozens of boxes holding the Kennewick Man’s remains were retrieved by nearly 30 members of the Yakama, Umatilla, Nez Perce, Colville and Wanapum tribes. The following morning, over 200 members of the same tribes gave him a proper burial in a secret location in the Columbia Basin. In a statement to the press, Burke Museum officials said they felt that this was “the right decision” and “long overdue.” JoDe Goudy, chairman of the Yakama Nation Tribal Council added that “The Ancient One, may now finally find peace, and we, his relatives, will equally feel content knowing that this work has been completed on his behalf.”