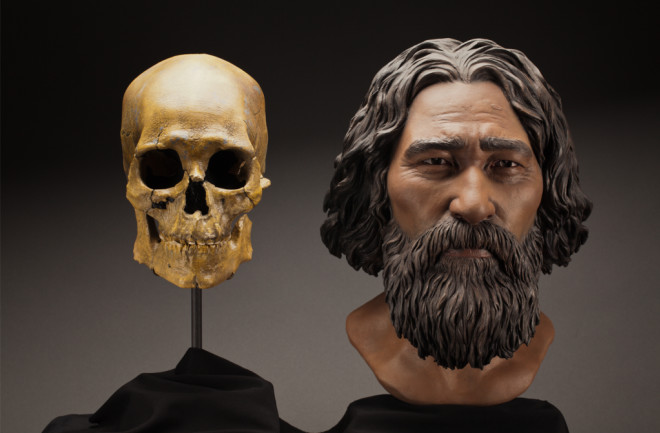 This clay facial reconstruction of Kennewick Man was carefully sculpted around the morphological features of his skull. Credit: Brittney Tatchell, Smithsonian Institution A new study ends a nearly 20-year debate over whether a famous ancient skeleton is related to modern Native Americans. But the findings also open a new chapter in an equally long legal battle over who decides the fate of the remains.

The 8,500-year-old skeleton known as Kennewick Man has been stirring legal and scientific controversy since it was found on the banks of the Columbia River in Washington State in 1996. Five Native American tribes from the area claimed Kennewick Man as an ancestor and fought a legal battle to repatriate and rebury the remains. The tribes' claim was challenged by scientists who argued that, based on anatomical features, the skeleton was not Native American and continued research on it should be permitted. The courts sided with the scientists and, since 2004, Kennewick Man has been held at Washington's Burke Museum. A detailed analysis of the remains, Kennewick Man: The Scientific Investigation of an Ancient American Skeleton, was published in 2014. The first successful sequencing of Kennewick Man's DNA, however, published today in Nature, establishes that he is most closely related to modern Native American populations, particularly those in the Pacific Northwest.

A team led by University of Copenhagen paleobiologist Eske Willerslev used a sample of less than one-hundredth of an ounce of one of Kennewick Man's hand bones to sequence the skeleton's genome. They then compared the results with the genomes of several modern populations, among them modern Native Americans, including members of the Confederated Tribes of the Colville Reservation, one of the groups claiming Kennewick Man as an ancestor. And the analysis confirmed that the Colville appear to be descended from a population closely related to Kennewick Man. Colville was the only tribe of the five involved in the legal battle to provide genetic material to researchers; their cooperation was particularly important because researchers have limited access to Native American DNA samples due to cultural resistance. Researchers found Kennewick Man was also relatively closely related to Anzick-1, the 12,600-year-old partial skeleton of a child found in Montana and the earliest known ancient American. Willerslev's team had successfully sequenced Anzick-1's DNA in 2014. Kennewick Man is not, however, closely related to either Polynesians or the Ainu of Japan, two groups previously identified as potential relatives based on another team's anatomical analysis of the remains.

Speaking during a press teleconference on Wednesday, Willerslev said his team obtained the DNA from leftovers of samples previously taken for dating and earlier, unsuccessful attempts at DNA extraction. The DNA sequenced was "highly damaged and fragmented," said Willerslev. He added that, due to the damage, researchers were only able to sequence each segment "an average of one time." By comparison, Anzick-1's DNA segments were sequenced an average of 10 times each. Despite the limited ability to repeat-sequence, Willerslev was confident in the results, which will almost certainly reopen the legal battle over the skeleton. Read more about the legal battle here.