Just How Many Extinct Types of Human Did Our Ancestors Meet?

Long before this cave painting was made, our ancestors met and interacted with multiple types of ancient human. 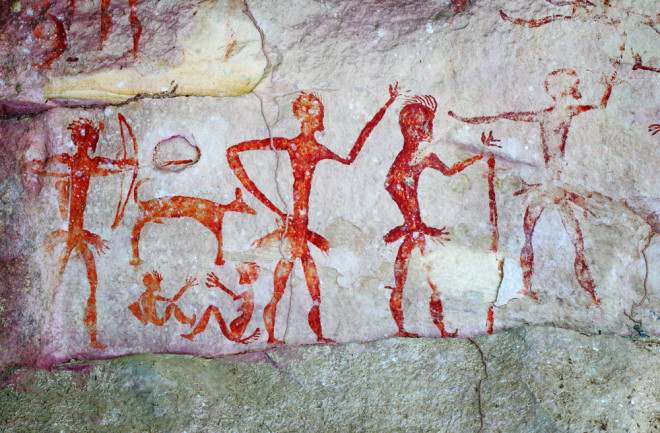 For the past ~40,000 years, Homo sapiens — modern humans — has been the only Homo species on Earth. But for most of our history, there were close evolutionary cousins of ours, human but not quite like us, coexisting and evolving at the same time in different regions.

Some of our now-extinct relatives, such as the Neanderthals, are well known. Others, like the recently-discovered Denisovans or Homo naledi have hardly made it into textbooks yet. And hints of even more human forms have been found in incomplete fossils and genetic patterns, although these relatives are poorly understood. Modern humans were just one of many variations on the Homo theme.

Now, as cutting-edge techniques uncover new evidence and reassess old finds, we’re closer to knowing how many types of humans coexisted with our ancestors.

It’s well-established that modern humans mingled with Neanderthals and Denisovans. DNA convincingly shows the three lineages interbred in every combo: modern human/Neanderthal, modern human/Denisovan and Neanderthal/Denisovan. And if anthropologists’ interpretations are correct, we also shared the planet with Homo floresiensis, H. naledi and H. luzonensis as well as perhaps some late-surviving H. erectus. Fossils of Homo sapiens and these species overlap in time, but were geographically separated by vast distances. It’s unclear if our ancestors actually set eyes on them. Lastly, genetic patterns suggest a few more lineages in the mix (here, here), which have not yet been linked to physical fossils. For now, they’re known as ghost populations.

That brings us to seven or more types of humans since the dawn of our species, some 300,000 years ago. As a matter of convention, I refer to all Homo species as humans.

I’m confident that number will increase in the coming years. Denisovans, H. naledi and H. luzonensis were just unveiled this decade, thanks to new excavations and — in the case of Denisovans — ancient DNA (aDNA). This relatively new technology has tremendous potential for discovering extinct lineages. In the past, anthropologists would debate if a toe bone or tooth looked similar enough to our own to be one of us. But aDNA can place fossils firmly on the evolutionary tree. For instance, the first Denisovan find was a mere pinky bone. No one would have guessed that unassuming fossil came from a previously-unknown branch of human evolution. But that’s where its DNA landed: on a lineage that diverged from modern humans over 520,000 years ago and then from Neanderthals roughly 400,000 years ago.

Next, I’m counting Homo varieties that inhabited Earth after the time when Homo sapiens actually became a species. The earliest bones widely accepted as members of our species date to 315,000 years ago from Jebel Irhoud, Morocco. The next-oldest come from the Ethiopian sites of Herto and Omo Kibish at 160,000 and 195,000 years ago, respectively. Consistent with genetic studies that estimate when all living people shared ancestors, ~300,000 is a solid back-of-the-envelope start date for our species (if, like me, you make evolutionary timelines on scraps of paper).

But human origins began long before modern humans. The ancestors of chimpanzees and humans parted ways over 6 million years ago. Since then, the branch that modern humans are on has included many species called hominins. Some continued evolving to become present-day people; most went extinct.

Early hominins, which resembled upright walking apes, included Sahelanthropus, Ardipithecus and Australopiths like the Lucy fossil. By 2.8 million years ago certain hominins had sufficiently large brains and modern-looking anatomies for anthropologists (somewhat arbitrarily) to classify them as members of our genus Homo — or as we call them, humans. For millions of years, Earth sustained numerous coexisting types of hominin, and then human. So the question, “how many contemporaries did we have?” depends on the timeframe.

Since Homo sapiens emerged, seven or more human types inhabited the planet. Today, we’re the only ones left. It’s an odd time in human evolution.