Jumping Spider Suckles Spiderlings Like They’re a Litter of Kittens

Researchers have discovered that mother jumping spiders (Toxeus magnus, an ant mimic) nurse their young with a milk-like substance. 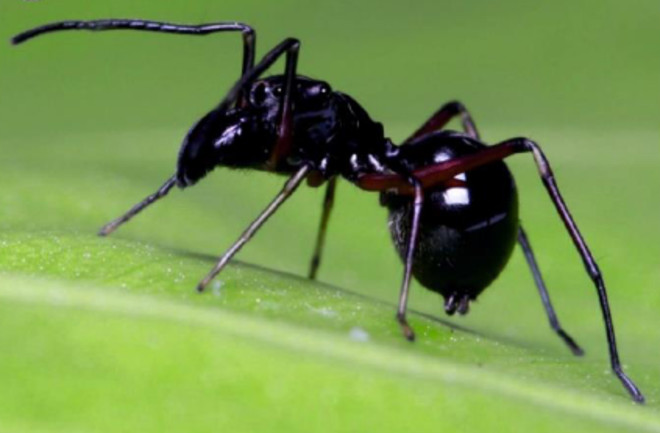 Got milk? Of course you do; few things are as uniquely mammalian as our milky infancies. Sure, we’ve all got backbones (but so do lizards), warm blood (but so do birds), and hair (but so do plants) – but it’s the mammary glands from which mothers nurse their young that really set us mammals apart from the rest of the Tree of Life.

That’s why it was a little shocking when researchers announced today that another species was found to provide milk to its young. The newest member of the milk-producing family … is a spider.

This, of course, depends on how broadly you define “milk.” By some narrow definitions, milk explicitly refers to the nutritious liquid secreted by mammals to feed their young. Ask the Dairy Industry, and they hold firm that this is the only acceptable definition – and have even attempted to sue companies they feel are using the term improperly. But throughout history, the word “milk” has commonly referred to any number of milk-like substances, including coconut milk, almond milk, and some plant saps. There’s no broad consensus on how to define “milk.”

There are already a few non-mammals known to feed their young substances that their bodies produce. Doves and pigeons, for instance, produce “crop milk,” a highly nutritious, but otherwise not particularly milk-like substance, that parents regurgitate for their young. Flamingos and some penguins, too, secrete a similar substance in their esophagus. There’s even a species of cockroach that gives birth to live young after feeding them a “milk” inside mom’s brood sack – a substance that was declared among the “most nutritious substances on Earth.”

But these substances are pretty far from milk, and though these parents feed it to their young, they’re certainly not nursing in the more literal sense. That’s why it’s so dramatic to see the image of a spider, surrounded by its suckling young like a dog with a new litter of puppies. Yes, that image exists. You asked for it:

Left, days-old spiderlings congregate around their mother. Right, spiderlings more than 20 days old suckle a milky substance directly from their mother’s epigastric furrow. This is the first recorded instance of a non-mammal exhibiting a behavior that so closely resembles milk provisioning. (Credit: Chen/Science)

Researchers at the Chinese Academy of Science made the discovery while following up on an observation about Toxeus magnus, a species of jumping spider that mimics ants. The spiders are normally solitary, but scientists noticed that groups were hanging out in breeding nests – including groups of one adult female and several young.

They suspected there was more to learn about the interactions happening in these nests. Why weren’t those spiders dispersing, unless there was some benefit gained from staying together?

To find out, the team, led by researcher Zhanqi Chen, studied the spiders in a lab at the Xishuangbanna Tropical Botanical Garden in Yunnan. After new broods of baby spiders hatched, the scientists watched to see if the spiderlings would leave the nest to eat, and whether the mother spiders would bring food back to the nest. They didn’t. This went on for 20 days, and all the while the spiderlings grew and developed normally.

A closer look revealed the extraordinary: Right after the spiderlings hatched, the mother spider would deposit droplets of a nutritious substance in the nest, and the babies would eat from the droplets.

Then after the first week, the spiderlings graduated to actually sucking the milk directly from the mother spider. This continued even after the spiders left the nest for their first hunt, supplementing their nutrition up until they were about 40 days old.

The milk is secreted from the spider’s epigastric furrow, a spot on the underside of the abdomen about where a dog or cat’s nipples might be.

Spider Milk is Most Mammalian Yet

If you aren’t sufficiently grossed out yet, the researchers were able to get a spider, under a microscope, to secrete a few drops of milk “after slight finger pressure on the abdomen.” They of course analyzed the liquid and found it has sugar, fat, and about four times as much protein as cow’s milk.

Finally, to be really sure they were seeing what they thought they were seeing, they ran a number of tests on the spiders. At different times during spiderling development, they either closed off the mother’s epigastric furrow to block milk access (by painting over it with correction fluid) or removed the mother from the nest entirely. This allowed them to see how dependent the spiders were on the milk itself and what care the mother was providing besides the milk.

Blocking the milk or removing the mother after 20 days, when the spiderlings were old enough to leave the nest, was detrimental but not devastating for the young spiders. But preventing newly hatched spiderlings from nursing resulted in 100 percent mortality. They need their mother’s milk to live, just like tiny humans.