Journey Through the New Cradle of Civilization

For decades, East Africa has served as the "Cradle of Civilization," but it may be time to look further south. 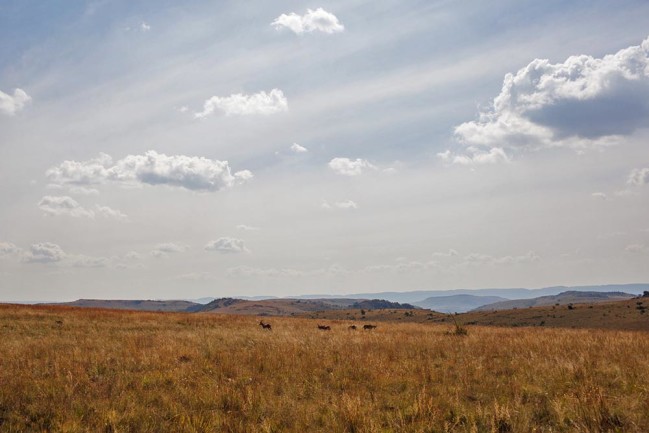 For over 50 years, East Africa has represented the the birthplace of humanity. But exciting new archaeological finds further from the equator, in South Africa, suggest our roots may lie there. The open country near the Malapa site (pictured) in the northeast corner of South Africa, where Australopitecus sediba, a hominin fossil, was found.

Check out the other sites in South Africa that are causing us to rethink our roots. 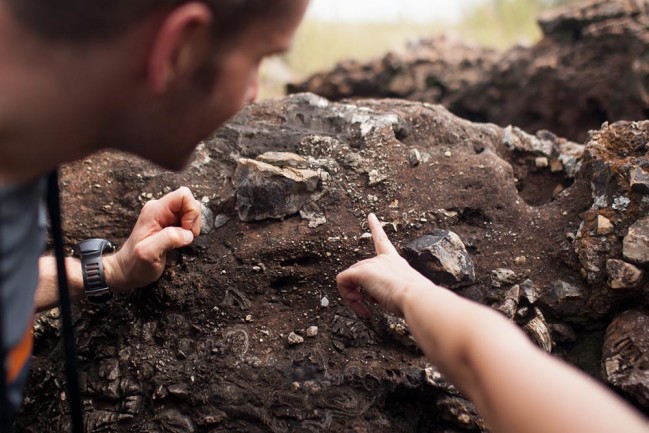 Christine Steininger, a paleoanthroplogist at Wits University in Johannesburg, South Africa, points out fossils sticking out of one of the excavation sites at Cooper's Cave in the Cradle of Humankind.

The walls of such excavation sites are so thick with fossils that they protrude in an almost comical abundance. Also visible in the image is Lukas Friedl, a visiting researcher from the Czech Republic. 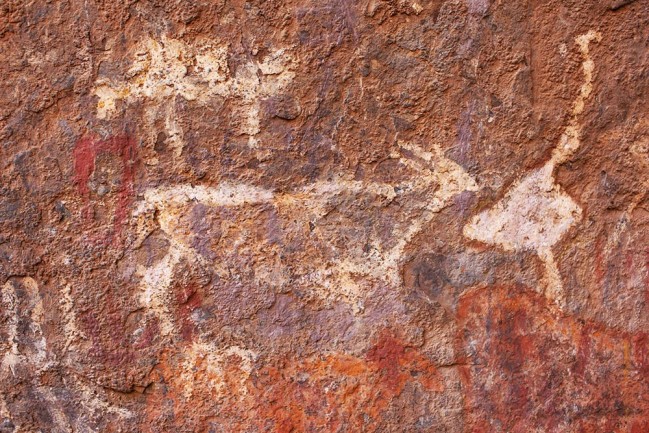 Cave wall paintings, of unknown age, on the entrance of Wonderwerk Cave near the edge of the Kalahari Desert.

Wonderwerk is one of the earliest sites of evidence for early hominin use of fire — dating back at least around 1 to 1.1-million years ago. Some researchers excavating the cave, like Michael Chazan, from the University of Toronto, expect to find evidence of fire dating back even further. Chazan hopes such a discovery would reveal clues about the role fire, cave dwelling and behavior played in making us the humans we are today.

The cave is one of the oldest sites of human habitation, being used in some manner almost continuously for over 1 million years. 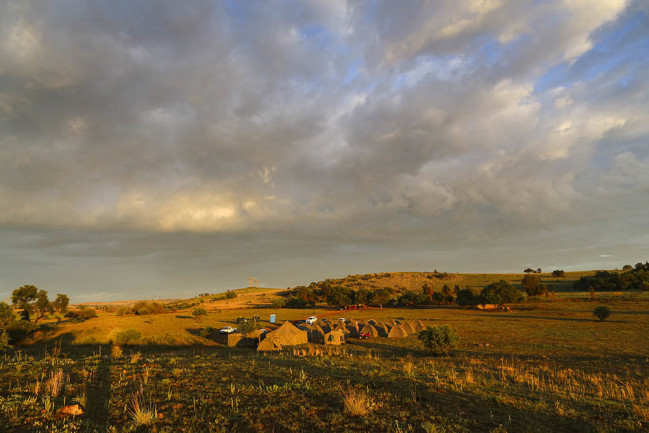 Dawn at the Rising Star Expedition campsite near a series of limestone caves known as Rising Star near Johannesburg, South Africa, on Nov. 26, 2013. Rising Star is the site of the discovery of nearly 1,700 fossils of Homo naledi, a species of hominin new to science. The project was led in part by paleoanthropologist John Hawks, professor of anthropology at the University of Wisconsin-Madison. 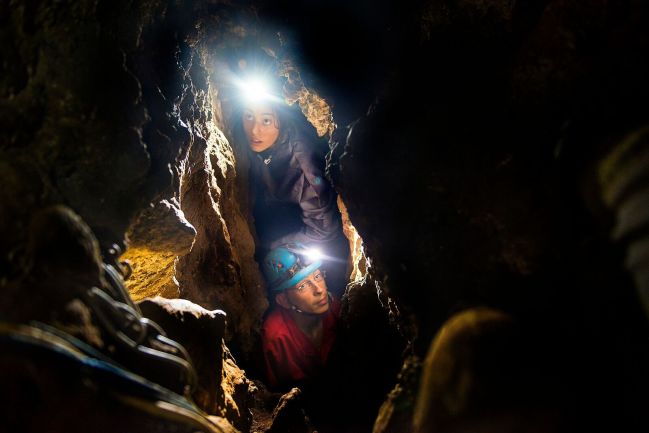 Lee Berger’s daughter, Megan, (top) acting as a safety caver on the expedition, and underground exploration team member Rick Hunter navigate the narrow chutes leading to the Dinaledi Chamber of the Rising Star cave in South Africa where fossil elements belonging to H. naledi, a new species of human relative, were discovered. 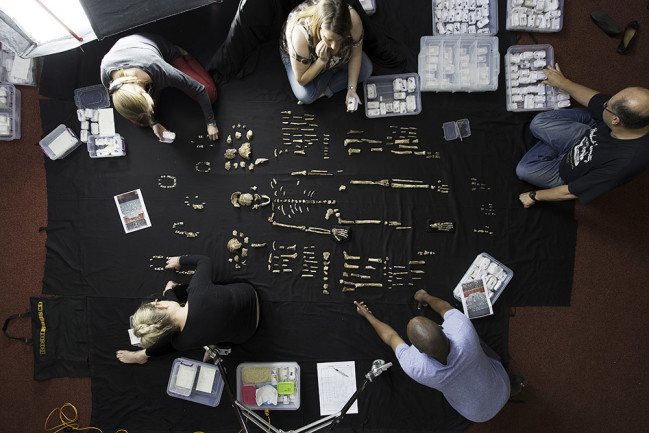 The find was announced by the University of the Witwatersrand, the National Geographic Society and the South African National Research Foundation and published in the journal eLife. 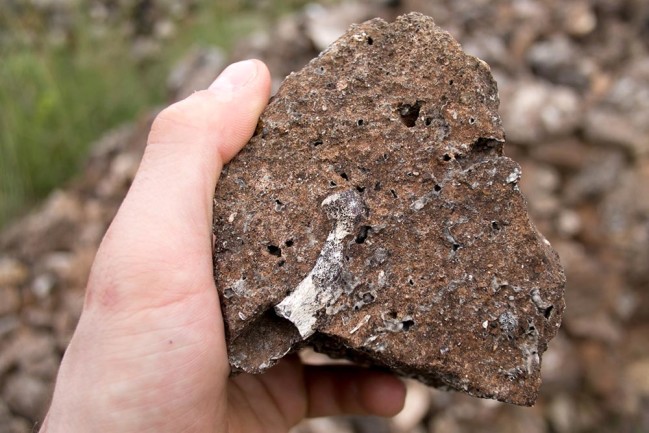 Photographer Russ Juskalian holds a discarded piece of breccia he found with a well preserved primate fossil lodged in it.

The Cradle of Humankind is so rich with fossils that even well-picked-over material sometimes yield fossils that were missed on the first or second passes. This fossil was found by Juskalian at a long, informal stonewall of discarded material known jokingly as The Great Wall of Cooper's. Steininger took the fossil back to the lab to evaluate it. 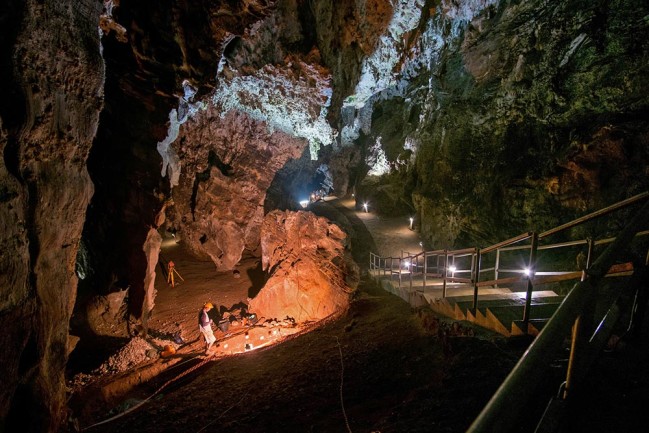 Dominic Stratford, a researcher in the Archeology department at Wits University, works on an excavation site within one of Sterkfontein's massive caverns.

On the left side of the frame we see Stratford working, and in the background (center, rear), we see a tour group. Though the cave is littered with active excavation sites, it is open to public tours of some of its main passageways. 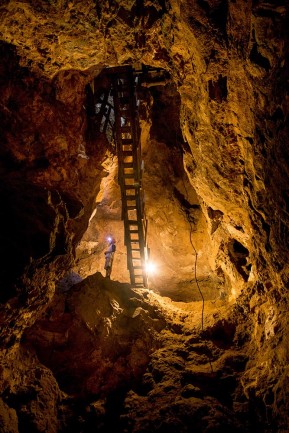 Stratford, a researcher in the Archeology department at Wits University, stands along the route to the Silberberg Grotto, the location where the fossil now known as Little Foot was excavated.

Nearby is another excavation site, the Jacovec Cavern, which some expect may come from an even older deposit than the one the 3.67-million year old Little Foot was found within. 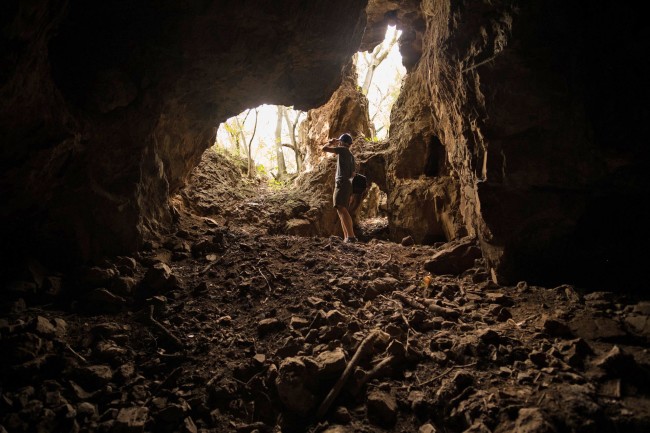 Lukas Friedl, a Czech researcher visiting Wits University to study its early hominin fossil collection, looks out from one of the many entrances of Sterkfontein Cave, the quintessential complex cave system in The Cradle of Humankind.

About 25 miles from Johannesburg, South Africa, Sterkfontein is one of the most productive early homin archaeological sites in the world. Its deposits include an Australopithecus africanus skull found in 1947 that came to be known as Ms. Ples, and, more recently, the most complete early Australopithecus ever found, called Little Foot. 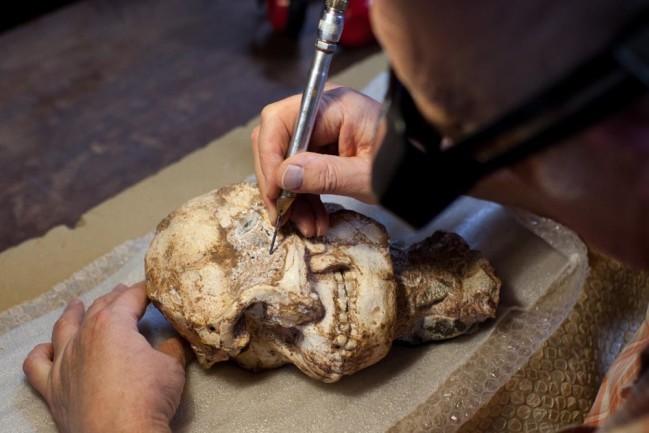 Paleoanthropologist Ron Clarke works on the fine removal of material from the skull of Little Foot, a spectacular early homin fossil — the most complete Australopithecus ever excavated — that Clarke says is a controversial species called Australopithecus prometheus. Recently dated to 3.67-million years old, Little Foot's almost complete skeleton, old age, and discovery in South Africa makes it comparable in importance, in some ways, to East Africa's Australopithecus afarensis fossil known as Lucy. 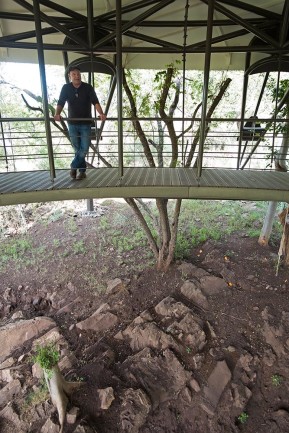 Lee Berger stands above the Malapa excavation site, in The Cradle of Humankind, from a viewing platform. The site is where Lee Berger's young son discovered the first fossil fragments that would come to be known as Australopithecus sediba — and shake up the world of paleoanthropology.

With two relatively complete skeletons, and fragments from four others, the Malapa discovery is one of the most puzzling, and extensive, early hominin finds in recent decades. The mosaic anatomy of Australopithecus sediba raises serious questions about our understanding of early human evolution. 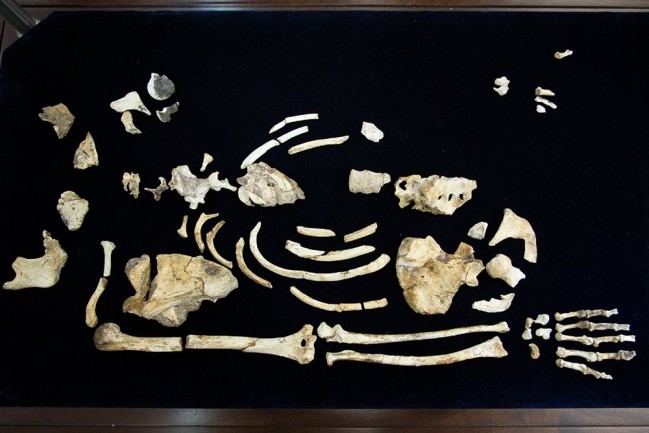 At the University of Witwatersrand, Phillip V. Tobias Fossil Primate and Hominid Laboratory, the reconstructed fossil skeleton of MH2, a female Australopithecus sediba found at the Malapa cave complex in The Cradle of Humankind.

The skeleton, along with others of the species found so far only at Malapa, are responsible for setting off a new golden age of early hominin fossil discovery in South Africa. Its mosaic of old and new anatomical features, and its 2 million year old age, raise troubling questions about our understanding of the human evolutionary tree's various branches. 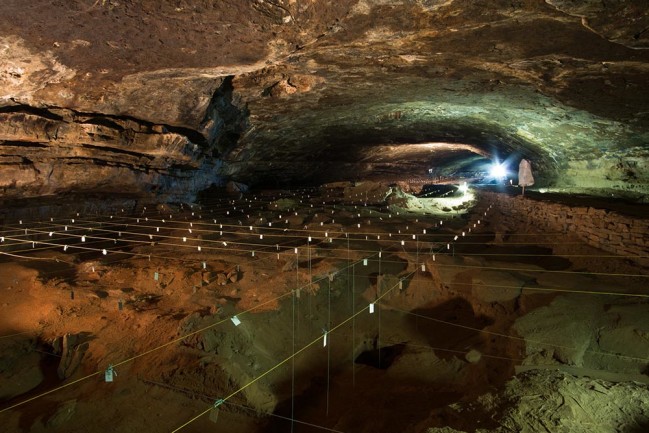 A view from the back of Wonderwerk Cave of natural light streaming in through the relatively narrow entrance.

The cave has yielded evidence of early hominin use of fire dating back around 1.1 million years. Standing in the back of the cave, with the lights off is almost a transcendental experience. At once it recalls the experience of our earliest ancestors — some of whom may have created rudimentary paintings on these walls — peering into the light. But it also recalls Plato's Allegory of the Cave, and the understanding that what makes us human is as much our behavior — and our thoughts — as it is our anatomy.