The search for an elusive sea creature is also the chance to rediscover a mysterious underwater world. 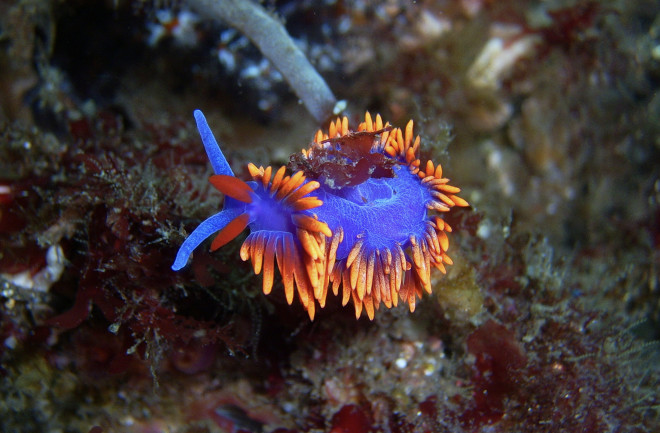 Slowly and deliberately, I searched shallow, underwater outcrops covered in colors. Weightless amidst the invisible push and pull of the current, pink coralline algae hung closely to rock surfaces or branched skyward against sporadic patches of neon green and glimmering iridescence. Shades of yellow, brown, white and orange flora began to appear as I drifted past micro-environments dictated by sunlight and structure. I allowed my scientific brain to go to work underwater, relying on one of my first developed senses: observation.

I had come to this underwater world to seek out a nudibranch. I had heard of this elusive marine organism, but until recently, knew almost nothing about it. My goal at the moment was just to find one, to examine it with my own eyes.

To find the colorful nudibranch, our intrepid scientist (in diving gear) began her search along the Monterey Bay coast. (Credit: Courtesy of Author)

Nudibranchs are invertebrates — backboneless organisms in the kingdom Animalia — that include 2,000 different species, many of which are best known for their wildly diverse and colorful appearance. But what’s beautiful to humans is to other animals an aposematic signal — a warning not to eat this creature. Nudibranchs’ bright coloration is intended to indicate unpalatability, and comes from a diet rich in animals armed with cnidocytes, the stinging cells common to sponges, anemone, and coral. Not all nudibranchs parade colorful displays; some rely on near-perfect camouflage to avoid being eaten. But coloration and camouflage can’t protect these and other underwater creatures from every threat.

As a scientist focused on water-based ecosystems, I’ve sorted thousands of invertebrates under the microscope and know that soft-bodied organisms are among those most susceptible to chemical and thermal water pollution. While these stressors can occur naturally, my studies across the river-estuary-ocean continuum have highlighted a clear relationship between water pollution and humans, among the most pressing issues of our time. Despite the scant nature of nudibranch surveys (in comparison to other charismatic creatures such as whales and sea turtles), studies have found these small, fragile organisms migrating to cooler waters or, in some cases, disappearing altogether. This troubling knowledge lent a certain urgency to my journey into the water.

I have always been drawn to scuba diving, especially since my grandfather worked alongside Jacques Cousteau. Graduate school had imposed a two-year hiatus on diving and forced me into the category of “drop-out diver” — those certified but not actively putting that certification to use. So, I decided against relearning scuba, and instead focused on shallow water freediving.

The Monterey Bay coastline became a frequent hour-long drive for me and my husband (my dive buddy by default) as we logged hours in the Pacific during the warm months of late summer and early fall. Between rounds of snorkeling at the surface, we performed free dives at depths of up to 15 feet to improve our duck dive, a swift 180-degree maneuver used to get underwater headfirst. Most of our time was spent getting comfortable in our 20-plus pounds of gear: a thick neoprene wetsuit, boots, hood, and gloves, plus a weighted dive belt, knife, mask, snorkel and fins.

Winter brought on larger ocean swells and poor visibility, not ideal for diving, so I spent the season connecting with an online niche of local artists, photographers, conservationists, and scientists advocating for Monterey Bay and its inhabitants. Among the stories and images this group shared, nudibranch sightings stood out most — like the radiant purple body lined with a mohawk of graceful but toxic orange horns, or cerata, belonging to the Spanish shawl (Flabellinopsis iodinea).

I read about the dynamic and cascading effects of events being studied in real time along the Pacific coast. For instance, sea star wasting syndrome has been killing these predators of sea urchins. The cause of the syndrome isn’t fully understood, although some evidence points to a full-body bacterial infection that disturbs the star’s microbiome and results in suffocation. Without sea stars to prey on sea urchins, urchins have proliferated and overgrazed, contributing to the collapse of historic kelp forests that leave behind devoid urchin barrens.

Another source of concern is more frequent extreme El Niño events, bringing in warm, nutrient-poor seawater. Such events can amplify devastation to marine life in the Pacific and have even been associated with the permanent relocation of an entire species of nudibranch, the Hilton’s aeolid (Phidiana hiltoni), which sought shelter in cooler waters of northern California.

I also studied up on the latest research on nudibranchs. In the Indo-Pacific in 2021, Sayaka Mitoh was the first scientist to observe and record a surprising feat of evolution in nudibranchs: self-decapitation. To overcome parasites that may infect the nudibranch’s body, the animal uses autotomy, or self-amputation, to rid itself of infection. Only the head, with two sensing horns, remains. Researchers reported that the Elysia marginata reincarnated its full body in three short weeks. I really wanted to meet this creature now and couldn’t wait for spring.

The author gets used to 20 pounds of gear.(Credit: Courtesy of Author)

At the first sign of clear conditions, we hit the road for our favorite snorkel cove at the southernmost tip of Monterey Bay. From our home in Santa Cruz, we traveled south along Highway 1. We crossed the single bridge in Moss Landing, at the mouth of California’s third largest estuary, the Elkhorn Slough — the site of my graduate studies and home to a population of federally endangered sea otters.

Research has revealed the sea otter, which was nearly hunted to extinction during the period of exploitative colonialism in America, to be a keystone species that helps protect kelp forests because of the top-down pressure that the otters maintain on the kelp-feeding urchins upon which they prey. I allowed the first wave of excitement to settle as I watched the intact dune system between Marina State Beach and Fort Ord Dunes State Park flash by, an ecologically important site made rare by global urbanization of coastlines.

Once in the cold water, I swam through a dense patch of giant kelp. Thirteen feet below, I inspected all that one breath in my lungs would allow: orange and purple ochre sea stars; a spent abalone shell lined with mother of pearl; purple, spiny sea urchins; and black perch hidden behind rusty-colored blades of kelp anchored to the seafloor. I was in a state of blissful sensory overload.

Nothing compared, however, to the moment that followed as I spotted a bright colored patch while combing through the shallows. “I found a nudibranch! A nudibranch!” I screamed loudly through my snorkel. Circling with the current, I let go of my need to know precisely what species I was gazing at and just mused over what I saw: white feathery tufts and a pair of horns at opposite ends. A bright yellow, jellylike living thing roughly textured in white round spots. A nudibranch, no doubt.

Through the online community of Monterey Bay enthusiasts, I learned more about my new acquaintance, the white-spotted sea goddess (Doriopsilla albopunctata), which occupies the waters connecting California and Mexico. The tufts at their rear are gills, and the horns at their front are known as rhinophores. These sensory horns make up for a nudi’s inherent blindness, and explained its response — a quick retraction of its exposed gills — to the incoming current I generated as I approached.

Finding my first nudibranch didn’t reinforce my identity as a diver nor as a scientist. Instead, it reminded me to relish my own successful, evolutionary instincts: inquisitiveness and a desire to learn. They’re instincts we all possess as Homo sapiens, and the sea goddess reminded me to use them to their fullest.

Andria Greene is a scientist who writes about her work on water-based places following rivers, lakes, estuaries and oceans.