Jewel wasps use special sensors on their stingers to inject toxins directly into cockroach brains. 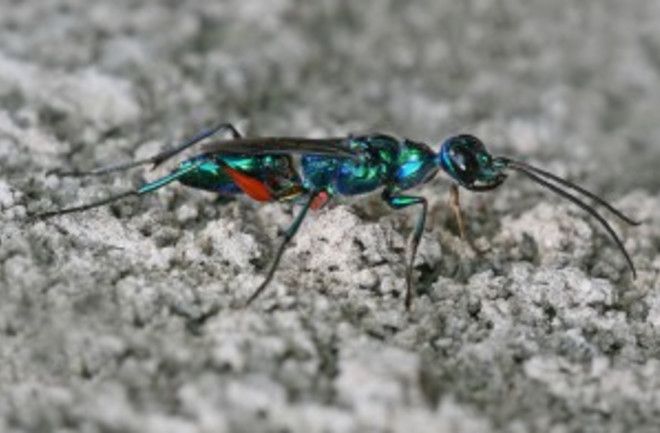 Image: Wikimedia Commons/Muhammad Mahdi KarimNot only does this paper have one of the best titles we've heard yet, but the scenario it describes is perfect for the next big sci-fi blockbuster. There are many species of wasps that parasitize other insects by injecting them with their larvae, which will grow inside the poor victims until they are large enough to eat their way out. But the parasitoid jewel wasp goes a step further: it first injects the brain of its cockroach prey with toxins that turn the roach into a zombie. In this study, the scientists set out to determine how the jewel wasp is able to identify exactly where in the cockroach to insert its stinger. Turns out that the wasps' stingers have special neurons that are sensitive to touch ("mechanosensitive"), and these neurons are activated when touching objects with a similar hardness to cockroach heads. Furthermore, the jewel wasps were able to inject cockroaches whose brains were replaced with hard substances but not soft substances, suggesting that the stinger neurons are able to identify cockroach heads by hardness. I don't know about you, but I'm just glad my research doesn't involve removing brains from cockroaches.Sensory arsenal on the stinger of the parasitoid jewel wasp and its possible role in identifying cockroach brains. "The parasitoid jewel wasp uses cockroaches as live food supply for its developing larva. To this end, the adult wasp stings a cockroach and injects venom directly inside its brain, turning the prey into a submissive 'zombie'. Here, we characterize the sensory arsenal on the wasp's stinger that enables the wasp to identify the brain target inside the cockroach's head. An electron microscopy study of the stinger reveals (a) cuticular depressions innervated by a single mechanosensory neuron, which are presumably campaniform sensilla; and (b) dome-shaped structures innervated by a single mechanosensory neuron and 4-5 chemosensory neurons, which are presumably contact-chemoreceptive sensilla. Extracellular electrophysiological recordings from stinger afferents show increased firing rate in response to mechanical stimulation with agarose. This response is direction-selective and depends upon the concentration (density) of the agarose, such that the most robust response is evoked when the stinger is stimulated in the distal-to-proximal direction (concomitant with the penetration during the natural stinging behavior) and penetrating into relatively hard (0.75%-2.5%) agarose pellets. Accordingly, wasps demonstrate a normal stinging behavior when presented with cockroaches in which the brain was replaced with a hard (2.5%) agarose pellet. Conversely, wasps demonstrate a prolonged stinging behavior when the cockroach brain was either removed or replaced by a soft (0.5%) agarose pellet, or when stinger sensory organs were ablated prior to stinging. We conclude that the parasitoid jewel wasp uses at least mechanosensory inputs from its stinger to identify the brain within the head capsule of the cockroach prey." Related content: The antifungal powers of cockroach poop. NCBI ROFL: Jeez people, enough with the cockroaches in your colons already. NCBI ROFL: Rambling roaches require receivers to run 'round roadblocks.