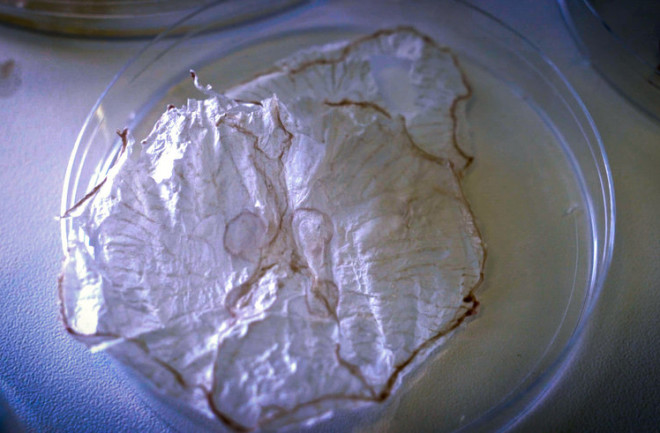 A dried-out jellyfish chip. (Credit: Anders Boe/University of Southern Denmark) Ah, nothing beats the crispy crunch of a jellyfish chip. Wait, what? Forget "Lady Doritos," jellyfish chips are a future snack for the masses. It turns out that the swimming gelatinous invertebrates can be leached of water to leave behind a thin, crispy wafer. It tastes of sea salt, apparently.

News of the delicacy first appeared last summer, when Mie Pedersen, a gastrophysicist from the University of Southern Denmark announced that she and her team had found a new way to prepare jellyfish and turn them into snacks. Her method involves treating the animals, which can be more than 95 percent water, with ethanol and then dehydrating them. The result is a shell of collagen that makes for a satisfying treat. It's no new delicacy, either. Jellyfish have been a source of food in Asia for hundreds, and perhaps even thousands, of years. There, a month-long process involving salt and alum is used to dry out the jellyfish. The result is something that's been described as "pickle-like" in texture, or perhaps a wet noodle, without too much flavor. Those attributes might make jellyfish a bit of a hard sell for those unaccustomed to the meal. Crunchy chips, on the other hand, are a popular staple of the Western diet. And using ethanol, a process that only take a few days, seems to be the key. "By transferring the alcohol we can basically remove all of the water in the jellyfish and then that means we have only the dry matter left,"says Mathias Clausen, a postdoctoral researcher at the University of Southern Denmark. "This turns out to have a crispy structure and forms a very dense network."

Jellyfish in the Belly

And the team is continuing to research their creation. They've moved on to microscopic studies of the jellyfish to understand how they change while they're being prepared, Clausen says. This means understanding how the long, thin tubes of crosslinked collagen that make up a jellyfish's body change during the ethanol treatment. The team is also trying out several different methods of preparation, he says, offering the potential for even more gastronomic innovation—barbecue jellyfish chips, anyone? The team recently collaborated with a Danish chef on a few dishes involving their jellyfish, and Clausen says that they've got more in the works with as-yet-unnamed restaurants. Part of what may make the jellyfish so appealing, he thinks, is their unique texture. "When we eat, we need to be stimulated in many ways with our senses. And one of the sense we like to be stimulated is our touch sensation in our mouth," he says. "If we eat a potato chip we need it to be crispy and not soft, even though the taste ... is the same, but just the fact that it's soft means that it's not appealing to us." After the initial crunch, says Clausen, the jellyfish disintegrate, leaving just a hint of the sea in the mouth. And jellyfish, unlike many other marine animals, are actually doing quite well. This could make them an attractive option for consumption. In depleted fisheries around the world, jellyfish have filled the void. They feed on plankton, tiny crustaceans and fish larvae, and the competition is making it more difficult for fish populations to recover. As ocean temperatures continue to rise over the next century, jellyfish will likely continue their dominance of the sea. They've already grown so abundant that the Chinese navy is testing jellyfish shredders to prevent the creatures from clogging up the water intake pipes on aircraft carriers. They gum up the works and power plants, and spoiled swimming areas around the world. South Korea has deployed autonomous robots to roam the seas and grind the creature to bits. Eating more jellyfish is just one more way to keep their numbers lower, and help other fish populations bounce back. As the saying often goes: If you can't beat 'em, eat 'em. Still, jellyfish will likely never be more than a snack — they're simply too lightweight to offer any real sustenance. But Clausen says that the team has considered processing jellyfish into a kind of salt that would be naturally fortified with protein and other nutrients. In this form, it could act as a dietary supplement. But their real goal, Clausen says, is simply to get people to look at their food in a different light. Someday, jellyfish may seem as tame to us as chicken.