Jatropha: Not a Miracle Biofuel Crop After All? 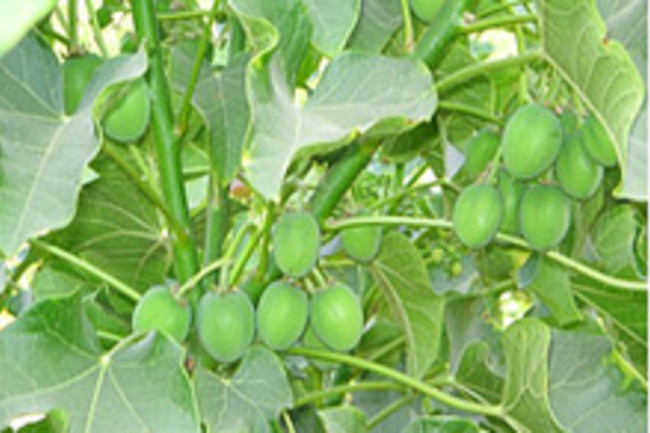 The oil-rich and weedy plant jatropha has been hailed as the most promising source of biofuel on the planet, and one airline has already begun testing a jatropha-derived fuel in its jumbo jets. But a new analysis suggests that the plant may not be a miracle crop destined to solve all our energy problems: Current jatropha plantations are

not realising the oil yields that drove the “Jatropha euphoria” [EcoWorldly].

It was previously thought that the hardy jatropha plant would require less water than other biofuel crops like sugarcane and corn and could grow in marginal soil, so growers wouldn't have to take fertile land out of agricultural use. But the new study rebuts that assumption.

"The claim that jatropha doesn't compete for water and land with food crops is complete nonsense," says study coauthor Arjen Hoekstra. The researcher says it's true that the plant can grow with little water and can survive through periods of drought, but to flourish, it needs good growing conditions just like any other plant. "If there isn't sufficient water, you get a low amount of oil production," Hoekstra says [Technology Review].

The study, published in the Proceedings of the National Academy of Sciences, found that making a

single liter of jatropha biodiesel requires a whopping 20,000 liters of water to grow.... That’s more than canola, corn, soybeans or sugarcane — more, in fact, than any commonly used biofuel crop. The two closest, canola and soybeans, require about 14,000 liters each [BNET].

Still, some researchers note that jatropha is a wild plant that hasn't yet been crossbred to maximize its yield of poisonous, oily seeds, and say they believe

that jatropha will mature into a better biofuel producer. Any plant new to cultivation takes a period of time before it reaches an optimum tame form, and jatropha has only been in use for a few years. There are also companies like SG Biofuels ... that are performing gene research on jatropha in hopes of extending its range and improving its yield [BNET].

Others suggest that jatropha can continue to fill a niche in the developing world, since turning its seeds into biodiesel is a straightforward process that doesn't require a huge capital investment. Related Content: 80beats: Air New Zealand Tests Jet Fuel Made From Poisonous Jatropha Seeds 80beats: Poisonous Seeds Can Be Turned Into Jet Fuel 80beats: Biofuels or Cheap Food: Do We Have to Choose? DISCOVER: The Second Coming of Biofuels