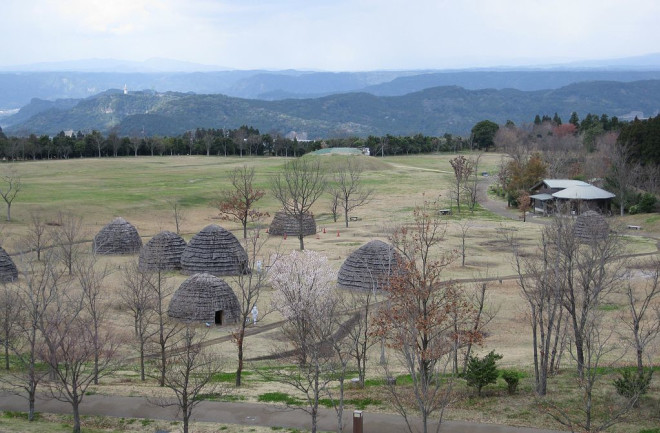 A reconstructed Jomon period village in Japan. (Credit: Wikimedia Commons) A new study of human remains from prehistoric Japan challenges the idea that engaging in warfare is deeply embedded in human nature. Prehistoric Japan was a pretty peaceful place, according to a recent study of prehistoric remains from around the country. That could mean that, despite evidence of early warfare from other sites around the world, early Holocene hunter-gatherers weren’t innately warlike. The study, published Wednesday in the journal Biological Letters, is new ammunition for the debate about the origins of warfare.

From 14,000 BC to 300 BC, the islands of Japan were home to a hunter-gatherer culture known as the Jomon. Archaeologist Hisashi Nakao and colleagues looked for evidence of fatal injuries in skeletons from Jomon sites around Japan, and they found surprisingly few. The Jomon Period had a violent death rate of 1.82 percent. Even during what's considered the most bloody phase of the period had a violent death rate under 3.5 percent. They also looked for “hot spots” of violence, clusters of fatal injuries in time or space. A large number of violent deaths in one place, or a higher violent death rate in one period of time, could be a sign of large-scale violence. But that didn’t show up in the data. The violent deaths were scattered sparsely in time and space, which suggests organized warfare wasn't common in Japan during this time. The implication, according to Nakao and colleagues, is that if the hunter-gatherers of prehistoric Japan weren’t prone to war, then warlike behavior isn’t necessarily preprogrammed in humans. Instead, it must be the product of other forces, like scarce resources, changing climates or growing populations. “We think it is often that no single factor can explain the real causes of warfare,” says Nakao. “Of course, without any of these factors, we probably could not find any cases of warfare.”

There’s no question that organized violence between groups – the precursor to fully-fledged modern warfare – occurred as early as 10,000 years ago, but its role in human evolutionary history remains a subject of lively debate among archaeologists and social scientists. One side claims that the roots of warfare are deeply ingrained in our evolutionary history. The other claims that war is, more or less, a product of agriculture, which led people to start settling in one place, amassing resources and developing hierarchies of power and wealth. To settle the debate, both sides turn to archaeological evidence and cultural studies of modern hunter-gatherer peoples — but those findings, perhaps a little ironically, often conflict with each other.

The skull of a man, found lying prone in the lagoon’s sediments. The skull has multiple lesions consistent with wounds from a blunt implement, such as a club. (Credit: Marta Mirazón Lahr, enhanced by Fabio Lahr) For instance, earlier this year, archaeologists led by Marta Mirazón Lahr found the earliest known evidence of organized conflict at Nataruk, a 10,000-year-old site near Lake Turkana, in Kenya. Mirazón Lahr and her colleagues claim that the 27 people who died at Nataruk were killed in a planned, organized attack by another group, probably in a conflict over the rich resources of the early Holocene lakeshore where they lived. According to Mirazón Lahr, the human capacity for violence runs deep, and warfare is what happens when the capacity for violence mixes with the right circumstances – uneven distribution of resources, for instance, or one group’s migration into another group’s territory – to trigger what she calls the collective expression of humans’ capacity for violence. “Warfare is a very particular form of violence, in which individuals agree to join other individuals in the attack of another group,” she said. “This requires the sufficient identification of individuals with the interests of a group to justify risking one’s life; it also often requires some form of recognition of authority or command. “Being able to carry out violence is a prerequisite for warfare, although one does not necessarily lead to the other,” she told Discover.

Other Sites of Violence

Bones unearthed at other archaeological sites indicate conflict was common in other parts of the world, too, with violent death rates as high as 23 percent among skeletons found at 30 sites in British Columbia dating back 5,000 years, or 12 percent at 6,000-year-old burial sites in France and Denmark. Elsewhere, however, violent conflict seems to have been rare, as in the Jomon Period in Japan. Among skeletons from 28 southern California sites, dating back 3,500 years, the rate of violent death was about 6 percent, and it was only 4 percent at a 7,000-year-old burial site in Algeria. What’s not clear is whether Jomon sites in Japan, or more violent finds like Nataruk, represent the reality of early hunter-gatherer life. It probably varied from place to place, according to Mirazón Lahr. “I think warfare is dependent on particular cost-benefit circumstances, its occurrence should be extremely variable in time and space,” she said. And that, according to Nakao and colleagues, means that warfare wasn’t the source of other social behaviors which are more universal.

Some researchers believe that warfare is the reason we cooperate with members of our own groups, or even sacrifice for the good of the group. That theory depends on the idea that conflict was common enough, and deadly enough, to actually have an effect on natural selection. If warfare wasn’t that common after all, then other forces must have shaped those behaviors. Samuel Bowles, in a 2009 study, looked for evidence of violent death in Pleistocene and early Holocene skeletal remains from around the world. He calculated that conflict may have been enough to drive natural selection in favor of altruism within groups. Nakao and colleagues disagree. “We are not sure, but if the presence of warfare was an important selective pressure for human behaviors, we should find different selective pressures in Japan (where we find low mortality and low frequency of warfare, as our study suggests) and in other countries,” says Nakao. “Suggesting that we should find different human behaviors among these countries. But we often do not, especially in altruistic behaviors.” In other words, populations in places with less evidence of prehistoric conflict, like Japan, should have developed less loyalty and “in-group” altruism than populations where early hunter-gatherer life was more violent, like British Columbia. That’s doesn't seem to be the case. Most modern populations show about the same level of cooperation and altruism for members of the same country, tribe, or religion. According to Nakao and colleagues, that means something other than warfare brought these traits out in our early ancestors. “Our study suggests that warfare is not rooted in our human nature, which means that it is wrong we cannot avoid warfare. So our effort to make and maintain peace is not fruitless,” says Nakao.