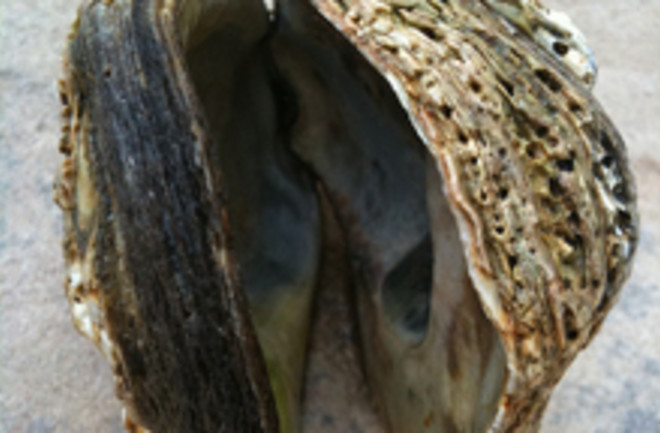 It's a good thing that the early English settlers of America were hardy and stubborn, because they certainly didn't have good timing. The settlers who established the Jamestown colony in Virginia is 1607 arrived during a historic drought, according to the records kept in tree rings, the worst in the area in 800 years. And now researchers have created an even more detailed picture of the dire climate situation those colonists stumbled into, and they did it with the colonists' trash. Oyster shells, to be exact.

The telltale oysters were unearthed from a well that sat within the fort at Jamestown, about 100 yards from the [James] river. Among other material dumped into the well, the shells came from three distinct layers up to 3.5 meters deep. The well’s water level originally sat deeper, at a depth of about 4 meters, so Spero and his colleagues suggest that the settlers abandoned the well — which either ran dry during the drought or was infiltrated by salty groundwater — and converted it into a trash pit [Science News].

Oyster shells work as record-keepers because the levels of the oxygen-18 isotope in them depends upon the temperature and saltiness of the water in which they grew. For the study

, published in the Proceedings of the National Academy of Sciences, Howard Spero's team compared the shells recovered from the Jamestown well—which they dated to 1611 and 1612—to shells from the same area today.

They found that the winter salinity of the river was much higher during the early 1600s than it is today. This suggests winter rainfall was considerably lower than modern levels, confirming historical accounts of drought conditions at the time [BBC News].

With salty river water and little rainfall, augmented by bad luck and leadership and attacks from the Native Americans, it's no surprise that the early years of Jamestown were so trying, and deadly. In an interesting twist, it was that increased salinity that extended the oysters' range so far into the James River. So, the shells that the colonists discarded after they ate the oysters tell the tale of the drought that led the colonists to eat the oysters in the first place. Related Content: DISCOVER: The Traveler's Tale

, on the connection between Jamestown and Shakespeare DISCOVER: Colonial Tough Guys

80beats: Oysters on the Comeback in Chesapeake Bay, Thanks to Elevated Homes