It's Rare, But a Lioness Can Grow a Mane

A lioness at the Topeka Zoo and others at least two other zoos — as well as a handful living in the wild — have grown manes. Why? 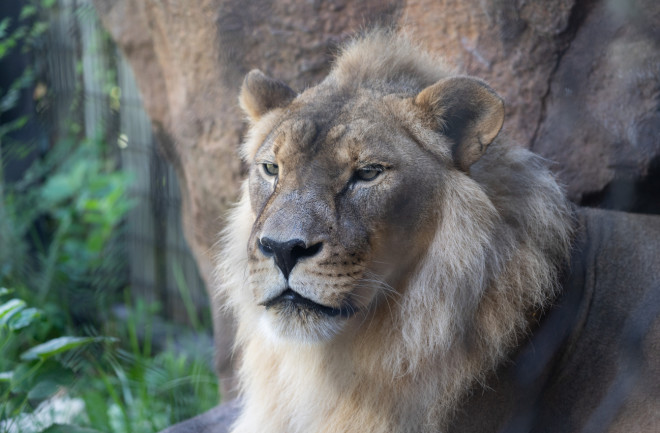 Zuri, a lioness at the Topeka Zoo and Conservation Center. (Credit: Ashley Read)

Avus, a 16-year-old male lion at the Topeka Zoo and Conservation Center, passed away due to old age in August of 2020. Then, a few months later, something strange happened to his female counterpart, Zuri: The 18-year-old lioness began growing a mane.

Topeka’s staff was stunned, wondering what had caused her new tufts of fur. “At first, Zuri started to grow a little more fur on the top of her head,” says Shanna Simpson, an animal curator at the zoo. "And then it slowly started getting thicker and thicker around her neck and chest."

Within five months, Zuri’s mane had grown out just enough that she resembled a juvenile lion — not as fluffy as an adult male but substantial, nonetheless. “When guests come to the zoo, they often think that we got a new young male lion, but it’s really just Zuri,” Simpson says.

Neither blood tests nor physical exams have hinted at what may have brought on the mane. Zuri is considered a “geriatric lion” but she’s in good health, according to Simpson. So, it’s most likely that testosterone hormones that typically stimulate mane growth increased after Avus’ death.

It’s a phenomenon that happens rarely in nature (or in captivity) and, in many of the cases that Simpson has seen, it’s the result of a scarcity of male lions; typically, she explains, it is the male’s responsibility to act as security guard for the pride while the female’s job is to hunt and take care of the young.

“When Avus died, it’s almost as if they lost their security guard,” Simpson says. “And that’s why Zuri took on that role.” She adds that since growing her new mane, the lioness has also become a little feistier than the other lions.

A few other zoos nationwide — one in Texas and another in Oklahoma — have documented cases of a lioness growing a mane. While the Oklahoma lioness had a tumor on her adrenal gland, potentially causing the hair growth, the Texas lioness’ situation was similar to Zuri, in that a male had recently passed away.

Famously, a number of documented Botswanan lionesses living in the wild once began behaving like males: Five females, all from different prides, grew manes. According to a 2016 study published in the African Journal of Ecology, these manes were the result of higher testosterone levels in the lionesses — likely similar to what has happened to Zuri.

In the case of the Botswanan lionesses, they also started to roar more often. (Female lions do roar sometimes, but regular roaring is usually left to the males.) Additionally, one lioness did kill a cub from another pride, an act that is extremely rare for a female lion.

Scientists don’t suspect anything in the environment has led to the female manes. More likely, they are simply an uncommon, localized phenomenon that may actually help these prides better compete with one another.

Zuri’s mane growth, meanwhile, has stagnated in recent months, says Simpson. But the animal is still in great health, especially for a feline that’s lived four years beyond the median age of a lion in captivity. Perhaps taking on the role of Avus has kept her young at heart, as she seems to be relishing in her new job as leader of the pride.