It's Official: Timeline For Human Migration Gets A Rewrite 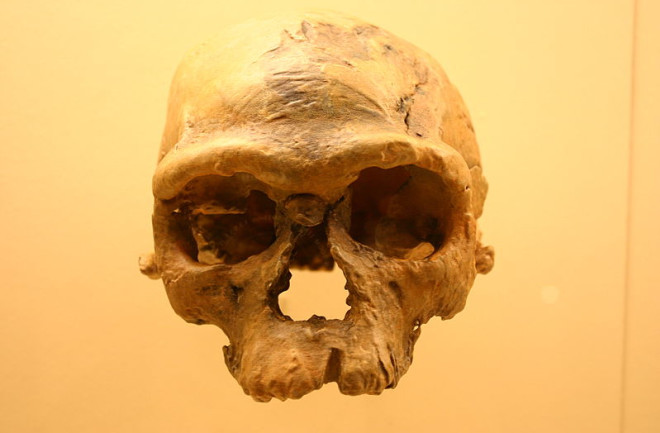 The traditional story of human migration out of Africa has been on shaky ground for years. Researchers in a new Science paper are finally calling for a revision. (Archaic Homo sapiens photographed at the Smithsonian National Museum of Natural History, credit Ryan Somma/Wikimedia Commons)

The wealth of new paleoanthropological, archaeological and genetic evidence has passed the tipping point: In a review published today in the prestigious journal Science, researchers acknowledge that the conventional timeline of human migration out of Africa “can no longer be considered valid.”

The idea of an African homeland for our species is less than a century old, rooted in the discovery of early hominin fossils in South Africa in the ’20s and championed by individuals such as Raymond Dart, who were initially dismissed and even ridiculed. Then more fossils were unearthed, particularly in eastern Africa, and the general consensus shifted. In the span of a couple decades or so, the idea that Homo sapiensevolved in Africa went from fringe theory to mainstream thinking*.

(*That said, there is a minority in the field, particularly researchers in East Asia, who believe no single location can claim to be the cradle of humanity. Rather, they argue that archaic populations of Homo erectus evolved regionally. More on this school of thought in a bit.)

Once the idea of an African homeland took hold, the question became how and when did modern humans road trip their way off the continent and across the globe.

Based on what fossils and artifacts they had, researchers constructed a timeline that modern humans evolved in Africa about 100,000 years ago and left the continent 50,000-60,000 years ago, going on their merry way in all directions across Eurasia and wiping out the Neanderthals (oops, sorry, Neanderthals).

Here’s the problem. Almost as soon as this timeline became a thing, new research turned up evidence that contradicted it.

Fossils with modern traits have been found from Morocco to China tens of thousands of years — even hundreds of thousands, in the case of the Morocco find — before the old timeline declared it possible. Analysis of both modern and ancient DNA has revealed a whole new hominin, the Denisovans, as well as multiple episodes of interbreeding between H. sapiens, Neanderthals and Denisovans, sometimes much earlier — and much further from Africa — than that pesky timeline allowed.

The great thing about science is supposed to be that you come up with a hypothesis and then you and other researchers try to shoot it down and, if the hypothesis doesn’t hold up, you come up with a new one based on what you learned from destroying the old one. And the scientific method generally works, as long as everyone keeps their egos in check.

Unfortunately, many researchers clung to the idea of a single migration out of Africa, no earlier than 60,000 years ago, for too long. Finds such as a human presence in the Levant 100,000 years ago, for example, were dismissed as a single band of early humans that strayed too far from home and went extinct— in other words, an evolutionary dead end.

Today, however, writing in Science, researchers say that no one can ignore the preponderance of evidence. It’s time, at long last, to revise that tired old timeline of human migration.

The timeline they call for is one of multiple migrations out of Africa beginning perhaps 120,000 years ago. While some of these early explorations certainly failed and became evolutionary dead ends, others, say the authors, survived, not only spreading across Asia but interbreeding with Denisovans and Neanderthals.

Both the archaeological and genetic evidence support a large dispersal from Africa around 60,000 years ago, but it was by no means the first — or the last — to occur.

The Point of Point A To Point B

Okay, so, science solved that, thanks, we know everything now, right? Nope. The new timeline for human migration still has some big holes to fill. Let’s start with where our species evolved.

Reading the map above, you might think the authors of today’s paper are suggesting our species evolved in Morocco 300,000 years ago. But the team behind the recent stunning Jebel Irhoud finds have stated they do not believe those early H. sapiens are directly ancestral to us. Pointing out other fossils believed to be archaic iterations of our species, such as a skull from Florisbad, South Africa, the researchers noted it’s more likely that H. sapiens were widely spread throughout the continent by the time a population reached Morocco.

Our birthplace remains a mystery. Also big questions: how the first modern H. sapiens left Africa and where they went.

The authors of today’s paper note that crossing from Africa to what’s now Yemen in the southernmost part of the Arabian Peninsula would have been no easy task. The strait between the two landmasses, currently about 12 miles wide, may have shrunk to a mere 3 miles wide during certain climactic conditions, but crossing it still would have required some kind of watercraft. It’s unclear whether the humans of 120,000 years ago could have built a raft or other basic vessel.

The Sinai Peninsula to the north, however, has provided a land corridor for the past few million years, and topologically at least appears to be the most likely route of dispersal — so it’s perhaps no surprise some of the earliest H. sapiens found outside of Africa are at Skhul and Qafzeh, just beyond the Sinai.

But early populations moving across the Sinai wouldn’t logically then take a sharp turn southeast, which is where the trail of artifacts and fossils seems to lead. Fragmented finds in southern and eastern Asia suggest that at least one group of early H. sapiens spread out along the coasts, eventually reaching Indonesia and Australia.

And some of these early exiters from Africa appear to have reached Siberia and northern China, interbreeding with other hominins along the way. The details, say today’s authors, remain to be worked out, as does our understanding of how these early populations on the move adapted to often radically different environments and ecosystems.

Acknowledging that our Out of Africa saga has many chapters stretching farther back in time is an important advance for the field. But some paleoanthropologists are unlikely to sign on: that small but vocal group of researchers who advocate a regional model for our species’ evolution.

Modern humans, goes this school of thinking, are an amalgam of regional archaic H. erectus populations that evolved in situ and the much later H. sapiens interlopers arriving from Africa. Claiming that H. sapiens were already dispersing from Africa tens of thousands of years earlier, as this new timeline does, suggests that our species really does have a single homeland — Africa — and puts a crimp in the regional evolution model, which is a source of pride in areas of Asia.

So, while the conventional timeline that has dominated for half a century finally takes a tumble, don’t think that this is the end of the great debate regarding the early days of our species. There are doubtless more studies, more discoveries and more contention to come.