It's Not Just You: Fruit Flies Also Base Their Dating Habits Off Of Their Peers 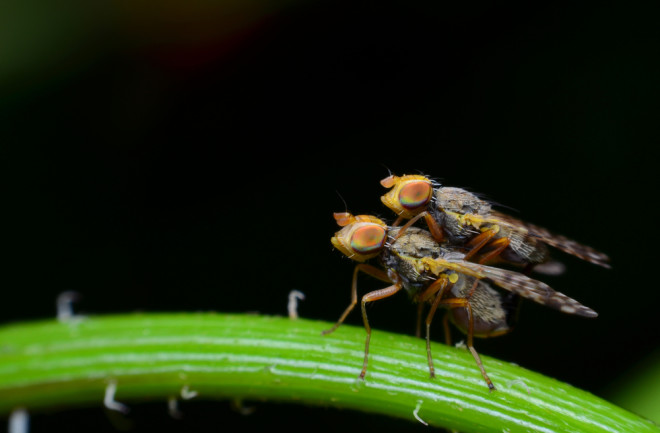 If you think dating culture only applies to humans, think again.

A team of researchers recently discovered that female fruit flies take their mating preferences from their peers. When presented with a few differently-colored suitors, the flies were more likely to choose the color they’d seen other flies select before them. This kind of conformity suggests that the fruit flies are passing behaviors among themselves socially — what we humans call culture.

These traditions persisted among the flies for generations, report researchers today in Science, and it’s shedding light on both the flies’ cognitive abilities and the evolutionary roots of cultural transmission.

Things like holiday celebrations, big expensive weddings or treacherous shopping the day after Thanksgiving may be foremost in your mind when you think of culture. But humans aren’t the only species capable of creating multi-generational traditions. The passing of rituals, which is what creates culture, has also been seen in vertebrates like chimpanzees, meerkats, birds and cetaceans.

A group of researchers, led by Etienne Danchin of the National Center for Scientific Research, wanted to see if social learning and cultural creation existed in species with lower cognitive abilities. To test this, they conducted five experiments on the mating habits of fruit flies, and observed whether or not they were passed along to their peers.

For their first test, they wanted to see if a female fruit fly would simply copy the mating habits of a fellow female. They partitioned a glass tube off into two sections: one with a female fruit fly and two males, one pink and one green, and another that housed a female observer. After watching the demonstrator fly freely select her mate, the observer female was immediately placed in the same scenario. And more often than not, the observer flies selected the same color male that their demonstrators did — showing a rapidly-learned partner preference.

Then, to test the durability of these preferences, females flies watched five demonstrators select green or pink mates, and then waited 24 hours to pick their own partner. After a whole day had passed, a big chunk of time in fly terms, the females still stuck to the color preferences of their peers from the day before.

This trend persisted into the fourth experiment, in which observer flies were presented with green and pink males that had different physical characteristics than the demonstrator males. Despite their abnormalities, they still opted for the color chosen by the demonstrator, which indicated that their selection was based solely off of the male’s color.

Finally, the researchers had female observers watch multiple fly couples go at it simultaneously. If certain colored males were favored even in the slightest, the observers were more likely to choose the color selected by the majority. It’s another indicator of how robust these choices are.

As a whole, these experiments revealed that fruit flies not only quickly adapt their behavior in response to their peers, but stick to these trends over longer periods of time. It’s a strong sign that cultural learning, at least in a very basic sense, is a factor in how fruit flies have evolved. Over time, this kind of cultural transmission would give the flies as a collective the ability to weed out or enhance certain traits. Think of it as literal swarm intelligence.

Of course, this cultural ability could produce positive or negative results over time, depending on the cultural decisions made. But, based on the number of fruit flies swarming the bananas I left on the counter, sexual selection seems to be working in their favor.