Private ownership of wild tigers creates health issues for the animals and doesn't help conservation, since it's nearly impossible to confirm their lineages. 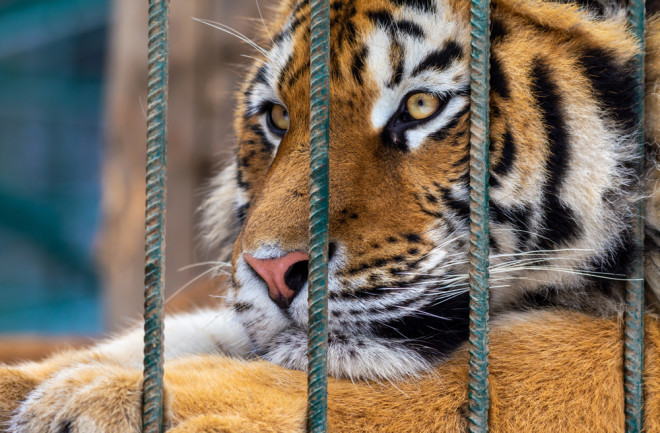 The Netflix series, Tiger King, gave us an unprecedented look into the world of backyard zoos and tiger trade in the spring of 2020. The show demonstrated how people used and abused tigers for fanfare and profit, and how many facilities and breeders were ill-equipped to provide proper health and nutrition to the big cats.

But America’s backyard tiger problem existed long before it was sensationalized on television, and it’s unclear how extensive the practice of illegally keeping tigers really is. According to a BBC article, there may be more captive tigers in the U.S. than collectively remain in the wild.

It’s unknown exactly how many tigers exist in captivity in the U.S. outside of registered zoos and sanctuaries, because of lack of regulation around animal registration when they are privately purchased or bred. Some estimate that there are over 5,000 tigers living in zoos, sanctuaries or individual ownership in the U.S. — while experts estimate only 3,900 tigers remain in the wild.

No Help to the Gene Pool

These animals often start out as pets, says Tim Harrison, director of Outreach for Animals. By the time they are six months old or so, their owners begin to realize they can’t keep up with the animals’ health needs or handle them as pets.

“They can’t get them to a veterinarian,” Harrison said. “Most won’t even come to your house to look at a tiger, so most of these cats have never been seen by a vet.”

What’s more, these backyard tigers are genetically useless to the conservation gene pool because it is nearly impossible to confirm their lineages or trace their breeding history.

There are two subspecies of tiger, the continental tiger (Panthera tigris tigris) and the Sunda island tiger (Panthera tigris sondaica). Remaining island tigers are Sumatran tigers, and the continental tigers include the Siberian tiger, the Bengal tiger, the Malayan tiger, and the Indochinese tiger. Tigers in Java, Bali and the Caspian tiger are now extinct, and experts believe the South China tiger is extinct as well.

These subspecies have evolved different adaptations, like coat thickness and coloration, to survive in their respective environments — and, because of their geographic distinctions, have never crossbred.

Therefore, even though 97 percent of wild tigers have disappeared, backyard tigers aren’t a viable solution for preserving the tiger gene pool.

Most conservationists and tiger rescues agree that backyard tiger purchase and breeding from private owners needs to cease. But a report published this year found that the U.S. accounted for half of the global tiger trade reported from 2003 to 2012. And without federal oversight, conservationists and advocates fear that America’s backyard tiger problem will only continue to grow.

“We want to know where all these animals are, who owns them, when they’re sold and transferred, when they are born, when they die, so we have a better grasp on what is going on with this immense population of tigers to ensure they are not filtering into illegal trade,” Leigh Henry, a senior policy officer for species conservation at the World Wildlife Fund (WWF), told CNN in 2010. A report published by the WWF that same year described U.S. regulation as a “patchwork of federal laws” rife with “exceptions, exemptions and loopholes.”

And yet, few concrete steps have been taken to outlaw the purchase and breeding of privately owned tigers in the U.S.

In 2013, the Big Cats and Public Safety Protection Act was proposed, which would formally restrict tiger ownership to facilities accredited by the Association of Zoos and Aquariums, according to a Smithsonian Magazine article. The act never came to fruition.

After Tiger King reignited the heated debate over big cat welfare, an updated version titled the Big Cat Public Safety Act was introduced in 2021. The Act amends the Captive Wildlife Safety Act to “prohibit the private possession of lions, tigers, leopards, cheetahs, jaguars, cougars, or any hybrid of these species,” according to the Animal Welfare Institute, and restricts interactions between the public and big cats.

The Act passed in the House last year but has since stalled. And as more stories come to light about the plight of backyard tigers, additional experts and organizations are calling for passage of the Act and federal involvement in the U.S. backyard tiger landscape.