Is the next blockbuster drug hiding in a century-old venom?

Prialt, a revolutionary painkiller 1,000 times as strong as opiates without the addictive side effects. Aggrastat. Byetta. Captopril. Integrilin. Prialt. What do these drugs have in common? Not what they're used for, certainly. From angina to diabetes, they treat different diseases or conditions, and all have very different markets. They're sold by different companies and were discovered in different laboratories around the world. But all have one simple thing in common: they come from animal venoms. Aggrastat was discovered in the venom of the saw-scaled viper (Echis carninatus). Byetta? A peptide from gila monsters (Heloderma suspectum). Captopril and Integrilin are found in other snakes (Bothrops jacara and Sisrurus milarius, respectively), and Prialt—a painkiller with 1,000 times the analgesic power of opiates, minus the addictive side-effect—was uncovered in the venom of an unassuming cone snail (Conus magus). And these five are only the first venom-derived drugs to hit the market. Five more are currently in clinical trials, and there are at least another six approved for use in other countries or under development. In the coming decades, more than a dozen drugs from some of the deadliest animals on the planet will likely make their way into pharmacies around the country. Considering it takes upwards of $1 billion to bring a new drug to market, pharmaceutical companies are investing a lot in venomous animals—and for good reason. These species have perfected their toxins over millions of years of evolution to be exactly what we look for in potential new treatments: effective, efficient, and specific. Scientists have now started mining a diverse set of venomous animals using cutting-edge proteomic, transcriptomic, and genomic technologies, hoping to find the next blockbuster drug tucked away in a spine, fang, or stinger. There's only one problem: the venomous animals that carry with them this wealth of potential pharmaceuticals are disappearing from our planet at an alarming rate. More than 10% of snakes are threatened with extinction. Scientists have estimated that tens of thousands of insect species are on the verge of disappearing; there are 50 species of ant in the US alone that haven't been seen since the 1960s. In reality, much of the life on our planet is on the brink. The Earth is undergoing the worst mass extinction event in all of its 4 billion year history. As species after species fades from our world, with them go the treasure trove of life-saving drugs they have locked away in their venom glands. Some of these animals' venoms have already been collected. For decades, scientists have been milking venoms from the most dangerous animals on the planet to create antivenoms. Many of them dried and set aside a vial or two of the venom for later use. These vials have sat desiccated for decades on a shelf, stored with what seems like little regard for how precious their contents may be. That is, until Bryan Fry, venom research rock star from the University of Queensland, decided to brush off the dust to see what's still inside. 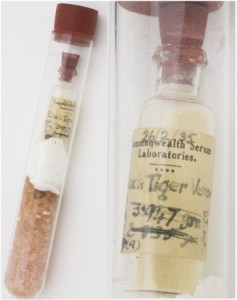 A vial of black tiger venom collected in 1935, one of the many samples housed in the AVRU's historical collection. Image c/o Bryan Fry Fry, with the help of a diverse set of collaborators from around the world, examined the activity of 52 different antique venom samples—some of which were 80 years old. The venoms themselves came from a collection of historical venoms curated by the late Straun Sutherland, an influential venom researcher who was integral to the development of numerous antivenoms. The collection was housed at the Australian Venom Research Unit (AVRU) which Sutherland founded when he left Commonwealth Serum Laboratories in 1994. Fry compared these "vintage venoms" to freshly collected ones from the same or similar species, observing differences in the proteomics profile, bioactivity and immunogenicity. "Some of the Australian venoms we studied may be the only samples ever collected from a range of unique island tiger snakes which are now threatened by habitat destruction,” Fry added. Some of the samples came from death adders from areas where cane toads have wiped the species out. “There is extensive variation between the venoms of different species so each venom sample is a precious resource,” explained Fry. Most of the samples would be impossible to obtain now, a fact which Fry never forgot throughout the project. "There is a little extra stress in knowing that the samples are absolutely irreplaceable!" he said. "They may represent the last opportunity to discover the potential wonder-drugs hidden within the venoms of endangered species of snakes." One of the samples was venom from the first coastal taipan ever caught alive. Unfortunately, the venom carries with it a tragic tale—Kevin Budden, a 20 year old amateur snake collector that wrangled the snake, was fatally bitten during its capture. "I wanted to kill the thing, but he would not let me," Jim Harris, the man who drove Budden and the invaluable snake to a local expert for ID, told The Cairns Post in July of 1950. "He kept saying that it was important for scientific research, and he had come to the far north specially to capture one." Budden died in the hospital a little over a day after the bite, but the venom from the taipan that killed him was used to immunize several horses, creating the first taipan antivenom. That antivenom began saving lives only five years later. “It was such an honour to work with these samples," explained Fry, "due to their immense historical significance." Even after decades of storage, the vintage venoms contained potent toxins. Fry was shocked to find that the simple glass bottles acted like mini time-capsules, and amazingly, most of the venoms were almost as biologically active as freshly-collected samples. Those death adder samples—collected in 1960 and 1961—still rapidly shut down neural communication. Venoms from taipans and tiger snakes from the 1950s still slowed clotting of blood in low doses but caused immediate clotting at high doses. The activities of these venoms are especially remarkable considering they were dried and stored simply, with rubber stoppers in glass vials, often kept at room temperature. The airtight seal created by the stopper was key, though. The samples whose seals were compromised were much more degraded. "The results show that properly stored venoms remain scientifically useful for decades," said Fry. Though this study looked backward in time, Fry was quick to note the current significance of these findings. He and his coauthors especially stressed the importance of collecting venoms from species now, before they disappear forever. "It is...of paramount importance that the venoms of rare and endangered species, not currently represented in stock collections anywhere in the world, be collected and appropriately stored to preserve a declining bioresource," they wrote in the discussion of the paper. "Storing these samples correctly is particularly important as many venomous snake species worldwide are declining and fresh venom may be difficult to come by," added Fry. This study was just the first step in characterizing the vintage venoms. Fry and his colleagues plan to continue their research, evaluating the different proteins, peptides, and small molecules in the antique samples and many more venoms that have yet to be tested. The data they will be collecting are vital for evaluating the potential usefulness of toxins as pharmaceuticals—the scientists that discovered Prialt began much the same way. Who knows? Maybe the next venom-derived drug will come from an animal that hasn't been alive for almost 100 years. Citation: Jesupret, C. ... Fry, BG. (2014) Vintage Venoms: Proteomic And Pharmacological Stability Of Snake Venoms Stored For Up To Eight Decades. Journal of Proteomics, Available online 14 January 2014. DOI: 10.1016/j.jprot.2014.01.004