Since the 1950s, the U.S. Navy has denied the existence of combat dolphins. But other countries may already deploy underwater assassins, trained to kill enemy divers in swift and gruesome ways. 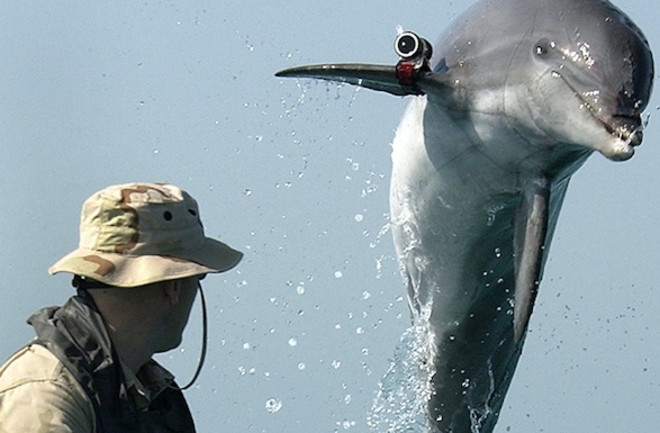 Fifty years ago, Hollywood released a curious film, 1973’s The Day of the Dolphin. The plot centered on a marine biologist who “unwittingly … trained a dolphin to kill the President of the United States,” according to one promotional tagline.

That's pretty much all you need to know about the movie, an outlandish sci-fi thriller typical of the era. Nevertheless, the film struck a chord with conspiracy buffs who, for more than a decade prior to the picture’s release, were already spinning compelling theories that happy, intelligent, innocent dolphins could be reconditioned into ruthless killers.

Over the years, theorists have further speculated (with varying levels of coherence and evidence) that the U.S. already has trained squads of battle dolphins. Their mission: kill enemy divers, plant mines on the hulls of opposing ships, and generally cause maritime mayhem with the mere flick of a flipper.

Back in the ‘70s, it should have been easy for the U.S. Navy to dismiss such rumors, but there was just one little problem: As part of a secret program that dated back to the height of the Cold War, the Navy actually was training dolphins and other marine mammals for military purposes.

In fact, they still are.

Send in the Dolphins!

It wasn’t until the 1990s, when the program was declassified, that naval sources could finally acknowledge the existence of the U.S. Navy Marine Mammal Program. Created in 1959, the program had initially attempted to train a variety of animals including sea turtles, marine birds and mammals, and even sharks.

The current program focuses on bottlenose dolphins as well as California sea lions, which support both Navy and Marine personnel in undersea reconnaissance and defense. Over the decades, the program’s marine mammals have been deployed for service in areas of operation ranging from Vietnam to the Persian Gulf.

A bottlenose dolphin training in the Navy Marine Mammal Program. No, that's not a weapon on its fin; it's just a locator device that allows the dolphin's handler to track it. (Credit: PH1 Brien Aho/U.S. Navy Photo)

Dolphins are a natural choice to serve as aquatic guard dogs, given their remarkable intelligence and amenability to training. What’s more, their superior underwater senses — including natural sonar that human technology currently can’t hope to match — make dolphins the perfect operatives to seek out and identify threats, such as mines or other dangerous submerged objects.

“Both dolphins and sea lions also assist security personnel in detecting and apprehending unauthorized swimmers and divers,” the program’s website states. The Navy is also quick to note that their program has yielded a bounty of science research, more than 1,200 studies in all.

Ever under scrutiny from animal rights activists and a compassionate public, what the Navy really wants you to understand is that their dolphins are benign peacekeepers and sentinels who also contribute to the broader body of scientific knowledge. What these military mammals don’t do, the Navy is keen to stress, is attack or kill potential combatants.

The extent of animal engagement with potential enemies, officials assert, doesn’t go beyond marking the location of suspicious swimmers, then retreating to let human counterparts handle an actual confrontation.

Furthermore, the Navy claims that dolphins would be terrible assassins. They say that dolphins, while highly intelligent, lack the ability and temperament to follow a kill order. Even if they could be trained for a death mission, it’s been argued that a dolphin commando would struggle to tell friend from foe, posing a risk to their own human handlers and trainers.

Although not generally belligerent, dolphins can attack if the situation demands. When threatened by sharks, for example, dolphins have been known to deliver devastating blows with their head or snout. Such a defense may be a last resort in nature, but it’s been alleged that a military trainer could condition a biddable dolphin to neutralize an enemy diver, using the creature’s natural defensive abilities, coupled with a weapon of some kind.

In fact, some former trainers in the U.S. program have disputed the official Navy position on dolphins that are used for defense only. In a New York Times report in 1990, two former trainers claimed that dolphins in the U.S. program during the '80s were conditioned to ram enemy divers with “swimmer nullification devices" that could fire a bullet. (The sources admitted that training was largely unsuccessful — rather than practice their kill-shot, the dolphins tended either to swim away or cozy up to divers affectionately. Aww.)

Another NMMP dolphin places a marking device in the vicinity of a dummy sea mine during a training exercise. (Credit: U.S. Navy Photo)

Meanwhile, other military powers may indeed have succeeded in giving their dolphins a license to kill.

As you might expect from any U.S. military project with Cold War origins, the former Soviet Union also developed a dolphin program of their own. Over the years, stories have emerged claiming that some dolphins in the Soviet Navy wore weaponized harnesses, allowing them to attack human opponents with gruesome harpoons, embolism-inducing needles or devastating poison darts. One quick poke from a sleek attack dolphin, and a clumsy human interloper would die thrashing in a panicked, bubbling frenzy.

While the full extent of the Soviet program is not known, evidence suggests that it’s still active in some form. As recently as last spring, satellite imagery indicated that the Russian Navy had deployed dolphin teams during the invasion of Ukraine, apparently to defend a naval base on the Black Sea. Some sources suggest that their dolphins are more than just guards and may have offensive capabilities.

The U.S. and Russia aren’t the only ones known to have deadly dalliances with dolphins. After the fall of the Soviet Union, the BBC reported that some animals from the old USSR program were sold to Iran, which may have continued to develop dolphins as living weapons. Even more recently, Hamas naval forces have claimed that Israel is weaponizing dolphins — armed with spear-gun harnesses — against them. Although alleged evidence of Hamas dolphin assaults was revealed to the media at the time, the account has since been widely ridiculed.

Still, it might be the basis for a great movie, if Hollywood ever decides that The Day of the Dolphin is due for a remake.