Weaker, paler and potentially directionally confused, some monarchs seem less prepared to journey all the way to Mexico. 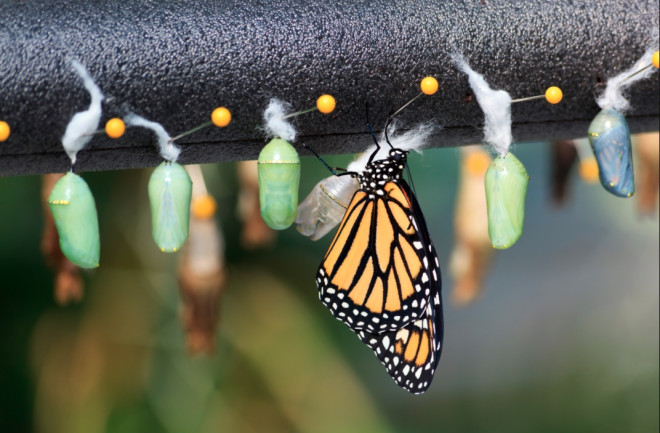 Elementary school teachers and wedding planners alike are fond of monarch butterflies. Their metamorphosis is educational, their signature wings are beautiful, and maybe releasing hand-reared individuals could boost the struggling wild population that flaps down to Mexico.

Mounting evidence, however, suggests the latter might not be true. The wing color and shape on monarchs raised in captivity indicate these individuals are less suited for the species’ long migration south, according to new research in the journal Biology Letters. And research published last year found that monarchs raised indoors struggle to orient themselves on their migration route. Put together, it seems the hand-raised butterflies might lack some of the skills needed to complete their important journey.

Though people might want to increase the number of individuals that descend on Mexico every year, the research suggests the good intention might not be panning out.

“People who do this rearing are doing it because they want to be helping the monarchs, and think that by taking them in and rearing them and letting them go, that will increase the number that make it to Mexico,” says Ayşe Tenger-Trolander, a butterfly researcher at the University of Chicago who co-authored the 2019 study but didn’t contribute to the newest publication. “But they’re probably somewhat less successful migrators than monarchs that grow up in the wild.”

It’s not clear how many hand-raised monarchs people release every year, says Andy Davis, an ecologist at the University of Georgia who co-authored the new research. He estimates the number lies between 200,000 and 500,000. Those raised in North America join their wild relatives on the continent and may or may not participate in attempts to migrate south, depending on the time of year they take flight.

Unlike other species that migrate, the monarchs that go to Mexico don’t come back. Instead, it takes three to four shorter-lived generations, moving in small increments, for the species to work its way back to Canada or the northern U.S. — until the impressive migratory generation emerges and wings it all the way back to Mexico during the fall.

When the season approaches, those that head south should be able to orient themselves in that direction. Tenger-Trolander and her colleagues found that those raised inside couldn’t seem to find that key orientation, while those raised in a semi-outdoor environment could. That discrepancy got Davis thinking about what else hand-raising might do to monarchs.

After raising some monarchs from eggs in the lab, his team captured fully-grown adults from the wild. Comparisons between the two showed the hand-raised butterflies lacked some of the attributes associated with a strong, successful migrator.

For example, those raised by hand were more stunted in the upper wing — a bummer, seeing as elongated versions of this body part are associated with an aptitude for migration. Wing color intensity also relates to migratory success, though researchers aren’t sure why, Davis says. “The darker the red, the better they fly.” The hand-raised butterflies were more yellow than scarlet. When the team tested how well the monarch could hold onto a rod, captive individuals had only 44 percent the strength of their wild relatives.

Raised by Hand is Being Babied

Davis thinks these weaker or less-capable migrators might get weeded out by predators in the wild. “Mother Nature has a way of making sure every monarch that reaches the overwintering site is the cream of the crop,” he says. When people raise butterflies by hand and release them as adults, individuals that might never have otherwise reached reproductive age might suddenly be getting a chance to go south or mate, Davis thinks. If that’s the case, then maybe these monarchs pass their inferior attributes along to future generations.

Whether or not that happens remains to be seen. Researchers still don’t know if the hand-raised monarchs breed with wild ones, or what kind of attributes each parent might contribute. Tenger-Trolander thinks it’s possible that if a monarch manages to reach Mexico, it probably has good genes to pass on, regardless of how it grew up. However, Davis would like to know more about how butterflies with a stunted migration fit into the reproductive patterns. Some monarchs appear to be parking in Florida instead of Mexico. The less-strenuous flight could be a perfect fit for those weaker butterflies — who then mate with generations returning from farther south.

Find Another Way to Help

Even if reared monarchs aren’t actively making wild butterflies weaker, it’s worth considering that raising the species by hand isn’t improving their population numbers, either, Tenger-Trolander says. “I understand that desire to see something physical out of what you do,” she says. “It feels way better to raise a bunch of monarchs and watch them leave.”

Instead, try and plant flowers that bloom in the fall if you live in a place where you see the monarchs often, Tenger-Trolander says. You likely live along their migration route, and the species is struggling with increasingly fragmented habitats and needs more places to stop for a replenishing snack.

There’s also climate change, a force that Tenger-Trolander calls “one of the biggest threats to [monarchs] beyond the destruction of habitat.” Reducing overall impact on the environment could also ensure more of the watercolor insects reach their winter destination.