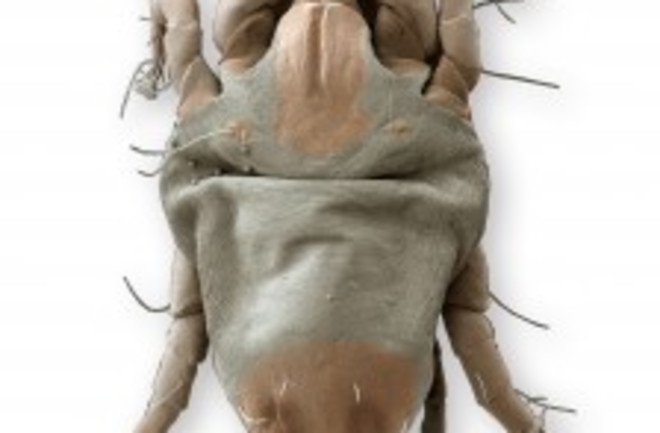 A scanning electron microscope image of an American house dust mite. Our world is quite literally lousy with parasites. We are hosts to hundreds of them, and they are so common that in some ecosystems, the total mass of them can outweigh top predators by 20 fold. Even parasites have parasites. It's such a good strategy that over 40% of all known species are parasitic. They steal genes from their hosts, take over other animals' bodies, and generally screw with their hosts' heads. But there's one thing that we believed they couldn't do: stop being parasites. Once the genetic machinery set the lifestyle choice in motion, there's supposed to be no going back to living freely. Once a parasite, always a parasite. Unless you're a mite. In evolutionary biology, the notion of irreversibility is known as Dollo's Law after the Belgian paleontologist that first hypothesized it in 1893. He stated that once a lineage had lost or modified organs or structures, that they couldn't turn back the clock and un-evolve those changes. Or, as he put it, "an organism is unable to return, even partially, to a previous stage already realized in the ranks of its ancestors." While some animals seem to challenge Dollo's Law, it has long been a deeply held belief in the field of parasitology. Parasitism is, in general, a process of reduction. Adjusting to survival on or in another animal is a severe evolutionary undertaking, and many parasites lose entire organs or even body systems, becoming entirely dependent on their hosts to perform biological tasks like breaking down food or locomotion. Parasitology textbooks often talk about the irreversibility of becoming a parasite in very finite terms. "Parasites as a whole are worthy examples of the inexorable march of evolution into blind alleys" says Noble & Noble's 1976 Parasitology: the Biology of Animal Parasites. Robert Poulin is even more direct: "Once they are dependent on the host there is no going back. In other words, early specialisation for a parasitic life commits a lineage forever." Now, parasites are proving that not only can they evade immune systems, trick other animals, and use their hosts' bodies in hundreds of nefarious ways, some can go back to living on their own. This is exactly what scientists now believed happened in the Pyroglyphidae — the dust mites. Mites, as a whole, are a frighteningly successful if often overlooked group of organisms. More than 48,000 species have been described. These minuscule relatives of spiders can be found worldwide in just about every habitat you can imagine. Many are free-living, but there are also a number of parasitic species, including all-too-familiar pests like

the mite which causes scabies. Exactly how the different groups of mites are related to each other, however, has been a hot topic of debate amongst mite biologists. Though the closest relatives of dust mites are the Psoroptidia, a large and diverse parasitic group of mites, many have argued that dust mites came from free-living ancestors — ‘living fossils’ of a sort, the only surviving line of ancestral free-living mites that later gave rise to parasites. In fact, Pavel Klimov and Barry O'Connor from the University of Michigan were able to find 62 different hypothesis as to how the free-living the dust mites fit into the mite family tree. Sixty-two, the team decided, was simply too many. So, they turned to the mites' genes. To test which of the hypotheses had the most merit, Klimov and O'Conner conscripted a team of 64 biologists in 19 countries to obtain over 700 mite specimens, which they then used to construct a mite family tree. They sequenced five nuclear genes from each species, then applied statistical analyses to construct a tree of relationships called a phylogeny. And that's when they saw it: deeply nested inside a large group of parasites were our everyday, non-parasitic, allergy-causing dust mites.

The phylogeny of mites showing the free-living dust mites evolving out of the parasitic Psoroptidia "This result was so surprising that we decided to contact our colleagues to obtain their feedback prior to sending these data for publication," said lead author Pavel Klimov. "Parasites can quickly evolve highly sophisticated mechanisms for host exploitation and can lose their ability to function away from the host body," he explained. "Many researchers in the field perceive such specialization as evolutionarily irreversible." But, their data were clear. "All our analyses conclusively demonstrated that house dust mites have abandoned a parasitic lifestyle, secondarily becoming free-living." Their data also shed light on how these mites could have accomplished such a reversal. The team found that parasitic traits actually may have facilitated the switch back to living freely. The closest relatives of dust mites have several traits in common: they are able to tolerate low humidity, possess digestive enzymes that can break down tough materials like skin and keratin, and are less specific about which host they live on than other mites. It's likely that the early free-living ancestors of dust mites were able to use these traits to switch from living on animals to living in their nests, eventually finding their way into our homes. The notion that dust mites were once parasites also explains why they are such a strong allergic trigger. "One would expect this feature to be present only in true parasites, having a direct contact with the host immune system," explain the authors. The authors hope that properly placing the Pyroglyphidae in the mite family tree will inform other scientists studying their public health importance. "Our study is an example of how asking a purely academic question may result in broad practical applications," said O'Connor. "Knowing phylogenetic relationships of house dust mites may provide insights into allergenic properties of their immune-response-triggering proteins and the evolution of genes encoding allergens." The hope is that such research could lead to better allergy treatments, which would be welcomed by the over a billion people who suffer from dust mite allergies. Dust mites are the number one cause of allergic symptoms worldwide, and are particularly bad for asthma patients, with upwards of 90% of them sensitive to the microscopic critters. While this isn't the first time that Dollo's Law has been questioned, it's the first strong evidence that parasitism might not be the evolutionary "blind alley" we tend to describe it as. The more scientists use genetics to study the evolutionary relationships between organisms, the more they find that Dollo's Law is less law-like than once thought, broadening our understanding of evolution as a whole and challenging our assumptions about how it works. Which is, really, the brilliance and beauty of science — like life on this Earth, our understanding of the universe is constantly adapting and evolving. Citation: