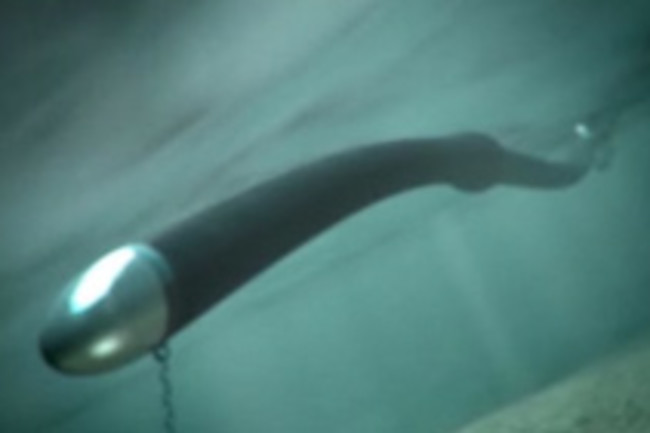 A new prototype of a wave power generator has been unveiled in England, and its inventors followed the creed espoused by Leonardo da Vinci: "Simplicity is the ultimate sophistication." The new wave power device, known as Anaconda, is a basic tube made from rubber and fabric and filled with water. It is still in trial phase, but its creators, optimistic about its potential as a source of mass power, are confident it will be cheaper than a wind farm generating the equivalent amount of power and less controversial in terms of public protest since the devices will be below the sea [Telegraph]. The Anaconda rides waves in the ocean, which create bulges along the tubing that travel along its length gathering energy. At the end of the tube, the surge of energy drives a turbine and generates electricity [BBC News]. While similar technology has already been deployed in the coastal waters near Portugal, the inventors of the Anaconda say its mostly rubber composition and its few moving parts combine to give it a sturdy and resilient edge in the tumultuous ocean. Until now, "the problem holding back wave energy machines is they tend to deteriorate over time in the harsh marine environment" [The Guardian], said Rod Rainey, an engineer with the Anaconda project. The company behind the Anaconda, Checkmate Sea Energy, has been testing a small-scale 25-foot-long prototype in a wave tank, but if the project goes to full implementation—which could happen in five years' time—each tube would be about 650 feet long. Each device is anchored to the ocean floor but moves with the waves, generating enough energy to power 1,000 homes. The plan is to have "shoals" or "schools" of the devices around the coast, where they would be harnessed to "swim" just below the surface [Telegraph] in groups of 50 or more.

The long-term plan is to have hundreds of these devices offshore where waves are big, in northern Scotland for example. Other potential locations would be on western seaboards - off the coast of America, Australia, Ireland and Japan, to name a few [BBC News].