The greens, blues and purples of iridescent animals are fabulous to behold. But biologists are still learning why the creatures are so colorful and bright. 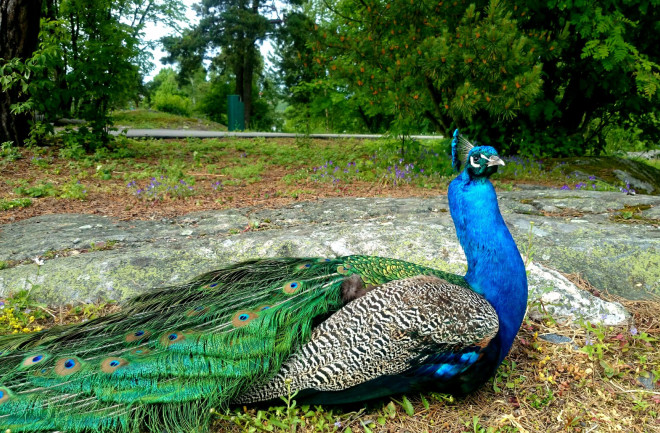 An iridescent male peafowl, aka a peacock. (Credit: Karin Kjernsmo)

Some animals are so flashy you can’t tell what color they are. From one angle they appear neon green, but a quick movement may bring their shade to deep blue or dark purple.

The shimmer of iridescent animals definitely stands out when seen in the right context, but now new research finds that these multi-toned animals may be using their bling to hide, not stand out.

Iridescence describes a color that isn’t any one color. You see it in soap bubbles, bird feathers, butterflies — even in reptiles, like this common dotted garden skink in Sri Lanka. You also may see it in the occasional sports car paint job.

Biologists have mostly thought of iridescence as a way for animals to show off to attract mates. But more than a century ago, Gerald Thayer and his father, Abbott Handerson Thayer, published the illustrated book Concealing-Coloration in the Animal Kingdom, showing how iridescence may also be used as a form of camouflage. They even included a picture showing how the brilliant plumage of a male peafowl may be camouflaged in foliage in the right conditions.

“This idea is actually really old, but it has never been shown before. I think it has just been neglected or forgotten,” says Karin Kjernsmo, a senior research associate at the University of Bristol’s CamoLab and the lead author of a new study on iridescence published in Current Biology.

Kjernsmo and her colleagues noted that many species with iridescent coloring have no difference between sexes, such as Nicobar pigeons. Furthermore, some insects — like groundsel bush beetles or common crow butterflies — are only iridescent in their larval or pupal stages, when they aren’t capable yet of mating.

They thought something else might be afoot when it comes to iridescence, and decided to test the Thayers' century-old theory.

The researchers ran experiments with jewel beetle wing cases, which are sometimes used in jewelry due to their beautiful shifting shades of green, blue and purple. They put a mealworm, a tasty snack for wild birds, inside each case, and then pinned them to trees around Leigh Woods National Nature Reserve in Bristol. As a control group, they also pinned up worm-filled shell cases that were green, black, blue or purple but didn’t change depending on the light.

In all, they left about 900 worm-filled beetle cases around the woods. After a period of time, they checked all their cases and counted how many mealworms had been eaten.

“The cool thing that we found was that the iridescent beetles survived best against birds against all treatments except for a black one,” Kjernsmo says.

While this showed the iridescent beetles may be more likely to survive bird predation, Kjernsmo and her colleagues believed the birds may still see the iridescent beetle cases, but avoid them on purpose, perhaps because they believe them to be venomous or otherwise unsuitable to eat.

So Kjernsmo and her colleagues conducted the same experiment, but this time with human volunteers who — presumably — had no desire to eat the beetles.

“If it’s explained that the birds were scared by the beetles, then humans should spot them easily,” she says.

But alas, “humans were surprisingly bad at spotting these iridescent models,” Kjernsmo says. They only spotted 17 percent of iridescent shells, compared to seeing 80 percent of the single-colored cases.

“It shows that iridescence is a very good strategy if you want to avoid being spotted,” she says, adding that this type of coloring probably works as camouflage in other species as well.

Vinod Saranathan, an assistant professor of life sciences at Yale-NUS College in Singapore, also studies iridescence. He says that Kjernsmo’s research is a “neat study” that “provides some support for a unique hypothesis that has never been considered.”

He says that jewel beetles aren’t native to Bristol, though, and that follow-up research might consider using a native iridescent species. Furthermore, he's not giving up on the bird-repellent idea that Kjernsmo tested with her human-spotting study. That's because humans, he points out, have notoriously bad vision compared with some birds and other animals — many of which can even see in ultraviolet. He’d like to see further research to confirm whether iridescence can be used as camouflage, though he still thinks it’s possible.

Saranathan studies iridescence in weevils. In an recent study, he examined fossils and found that this effect dates back at least 13,000 years. Given that these tiny beetles have very short lifespans and are still iridescent, he believes that selective pressure over the generations is clearly favoring the trait. And although the iridescence of these weevils may have once evolved for camouflage, there's evidence it may have diversified in function since then, perhaps to help weevils recognize potential mates.

Both Saranathan and Matt Shawkey, an associate professor in evolutionary biology at Ghent University in Belgium, are also interested in ways to use iridescent adaptations in wildlife for synthetic color design. Shawkey says it’s possible the physical structure required for creating the iridescent effect may have other effects besides looks. In some animal surfaces, iridescent surfaces are often also very smooth, which could make it easier for beetles to burrow, for example.

It’s also possible, he says, that some animals are using iridescence to thermoregulate by changing their position in face of the sun.

Understanding these natural materials would be an advantage to materials scientists, since synthetic dyes and pigments can be bad for the environment. Also, the structural colors formed by iridescence can respond to things like humidity in a way that pigmented colors don’t. “They can be sensitive to environmental changes,” he says.

But Kjernsmo says there isn’t any reason iridescence couldn’t be used in some species both for camouflage and other purposes.

“I think that more and more we should rethink our [view] that certain colors and patterns only serve one purpose,” she says.