Inside the Brain of an Octopus

The brain of an octopus has some similarities to humans, and shows many signs of high intelligence. 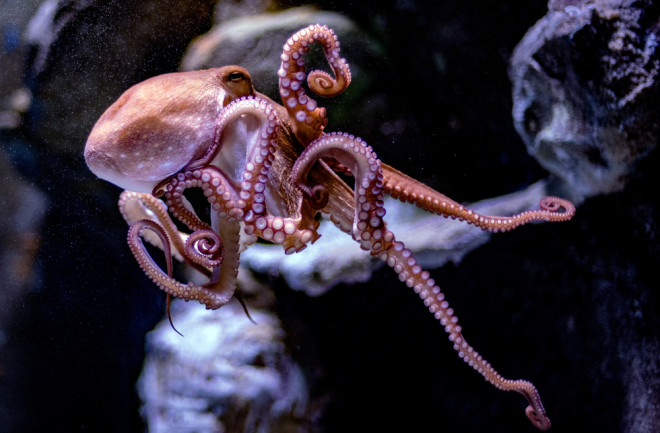 “The octopus is a stupid creature, for it will approach a man's hand if it be lowered in the water,” wrote Aristotle more than 2,000 years ago in History of Animals. But octopuses’ inquisitive behavior has, in more recent years, helped tip scientists off to their smarts. Films like the 2020 Oscar-winning documentary My Octopus Teacher and essays like Sy Montgomery’s “Deep Intellect” paint octopuses as curious, sensitive and even playful creatures.

The more that researchers examine octopus genetics, brains and sensory capabilities, the more they find startling similarities to our own minds, hand in hand (or sucker-covered arm in sucker-covered arm) with bizarre differences between how our species experience the world.

Octopuses are mollusks, the same phylum that clams and snails belong to. We split off evolutionarily from each other about 600 million years ago; our most recent common ancestor is a flatworm. Despite this evolutionary distance, our brains have some core elements in common.

Read more: How Do Octopuses Experience the World?

Both human and octopus brains contain central processing areas dedicated to decision-making and bringing together and integrating information from numerous sources, like our sensory organs. Our brains are two-lobed and bilaterally symmetrical, and they’re located in our heads. But for all these similarities, our nervous systems diverge in unexpected ways. The most striking one might have to do with octopuses’ most notable feature: their arms.

Octopus arms (not tentacles – tentacles aren’t covered in suckers) have a mind of their own, literally. Of an octopus’s neurons, or nerve cells, three-fifths are in its arms; each sucker has its own set of neurons that control it. This gives each arm a lot of autonomy when it comes to moving, sensing the world around it, and even making low-level decisions.

“If I chopped off your arm, it would lie on the floor,” says Jennifer Mather, a professor of psychology at the University of Lethbridge and a scientific advisor for My Octopus Teacher. “If I chop off an octopus’s arm, it acts like sort of an independent entity for a while.”

Overall, this spread-out network of neurons and autonomous parts makes the octopus brain “less of a control system than our brain,” says Mather, but she notes that humans have neurons throughout our bodies as well, including long nerve cells running along our limbs to our extremities, and in our guts. Octopuses just take that concept to the extreme. However, says Mather, the popular “fun fact” that octopuses have a brain in each of their arms is untrue.

For sensory processing, octopus eyes have a lens like ours, but they can’t see color. This makes it even more confounding to scientists that octopuses possess psychedelic color-changing capabilities that they use to hide and communicate. Instead, octopuses can detect polarization: the different directions in which light waves vibrate. This might be a more useful sensory tool for octopuses since colored light tends to get filtered out by deep water, especially at the reddish end of the spectrum, but polarization is less affected. In addition to these different means of visual processing, octopuses also have impressive chemical sensing capabilities.

With these organization and sensory processing tools, octopuses also exhibit a boatload of behaviors that clearly read to researchers (as well as non-scientists) as highly intelligent. Anil Seth, a neuroscientist at the University of Sussex, has posited that octopuses can help us conceptualize a form of intelligence far different from our own.

“If there are sentient aliens in the universe,” he writes, “one way of trying to understand what sort of consciousness they may have is to think about the inner universe of the common octopus.”

Octopuses put that intellect to work in a variety of ways. The Internet has a soft spot for stories about octopuses escaping their tanks, squelching their way across the room, snacking on other aquarium creatures and then sneaking back home. And their hunting behaviors in the wild show “highly complex, calculated behaviors,” says Wen-Sung Chung, a researcher at the University of Queensland who specializes in cephalopod neurobiology.

“They can do foraging navigation based on the landmarks or the polarization patterns of the sky,” he says, and they also practice “interspecific cooperation hunting: fish and octopus, they can hunt together. That's very rare animal kingdom.”

On top of all that, says Mather, octopuses exhibit another behavior relegated to highly intelligent animals like wolves, dolphins, and humans: they play.

Read more: These Octopuses Throw Objects, Sometimes at Each Other

Scientists are still discovering new mechanisms that explain exactly how octopuses are capable of such cognitive sophistication; one recent study found that octopus brains contain an unusually high amount of non-coding microRNA molecules used in regulating genes and building proteins.

Read more: We Share Smarts with Octopuses, and Now We Know Why

But when it comes to the evolutionary pressures that resulted in brainy octopuses, Mather has a hypothesis. She remembers growing up watching Jacques Cousteau’s underwater films of sea creatures, including octopuses.

“He called them ‘the soft intelligence,’ and that actually gets at a very important point about the octopus,” she says. “They don't have all these physical protections – they don't have an exoskeleton, they don't have spines, they don't taste horrible. So basically, the way they survive is by their wits.”