Tiny Octopus Is So Cute Scientists Might Name It 'Adorabilis'

The species is unnamed of yet. But it's super cute. 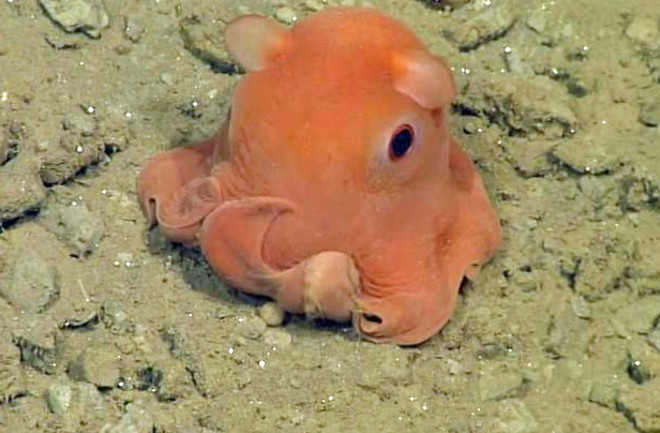 Deep in the ocean’s cold, dark waters lives a species of wide-eyed octopus that will surely warm your heart with pure cuteness.

Up until now, these peculiar creatures have gone unnamed. Now, scientists are preparing to formally name the species, and they’re considering the one word that captures this tiny cephalopod’s essence: Opisthoteuthis adorabilis.

Researchers have been collecting and studying these unidentified cephalopods since 1990, but no one undertook the exhaustive process to scientifically identify them. Scientists need to study newly discovered creatures — inside and out — to clearly describe how they are unique from other species that may be closely related. New species identifications, including a name, are then published as articles in scientific journals.

This species belongs to the Opistotheuthis genus, which includes octopus species that are notable for their compressed shape and stumpy, webbed limbs. The naming task in this case falls on Stephanie Bush, a researcher at the Monterey Bay Aquarium Research Institute, who has been working hard to classify these aquatic animals.

Bush and her team are caring for these creatures in super-chilled, dark aquariums in order to study their internal and external anatomy. The tiny cephalopods have gelatinous, fragile bodies with huge eyes. They spend their days spreading their webbed tentacles and floating through the water, using tiny fins that look like hippo ears to steer. Bush has also dissected the creatures to describe their internal anatomy. And since she’s put in the time, she’s earned exclusive naming rights.

“As someone that’s describing the species you get to pick what the specific name is,” Bush told Science Friday. “One of the thoughts I had was making it Opisthoteuthis adorabilis because they’re really cute.”

What do you think its name should be?