Inside an Ant Royal Rumble 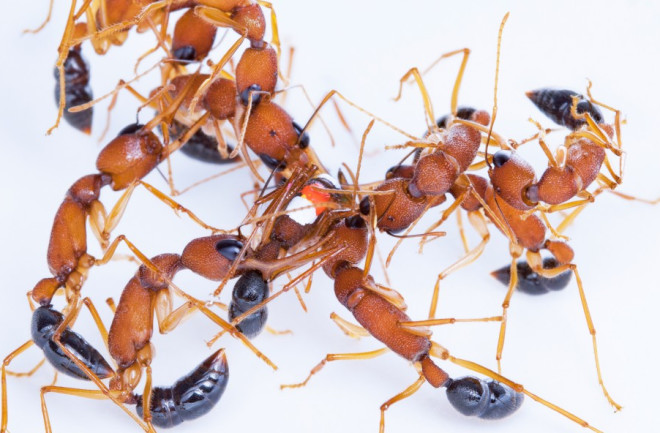 Indian jumping ants form a "police ball" around a feisty subordinate (somewhere in the middle). (Credit: Clint Penick) A months-long Indian jumping ant Battle Royale is almost as brutal as the process to elect members of Congress. But after the dust settles in the ant colony and on the campaign trail, the hierarchies that emerge are, in a loose sense, similar. When an Indian jumping ant (Harpegnathos saltator) colony’s queen dies, her distinctive I’m-having-babies pheromones stop circulating, and workers, alerted by the absence of her familiar scent, gather at the center of the colony and form a circle around the larvae and pupae. A single ant starts beating another ant’s head with its antennae, and in no time half the ants in the colony are engaged in antennal fencing duels. Slaps escalate to head biting, and “police” ultimately intervene and restore order — more on that later. The ants, of course, aren’t competing for a gaudy title belt; they’re roughing each other up to determine who gets to lay eggs and who doesn’t. And after months of heated — relatively harmless — conflict, 10 to 15 top candidates emerge and they transform into gamergates; their brains shrink, their abdomens fill with ovaries and their expected lifespans grow from a max of six months, to up to five years. The group will equally share egg-laying power and pick up where the queen left things.

The new colony order is a complex social arrangement, called a shared dominance hierarchy, that’s seen in a few other ant species, but is more common in “smarter” animals like humans and dolphins. But ants aren't, as individuals, cognitively advanced. So how do they do it?

The secret is in the way they fight, according to a behavioral model constructed by researchers at North Carolina State University, the University of Oxford and Arizona State University. Many vertebrates can recognize individuals and remember past interactions with them, and those two skills are thought to be essential in forming shared dominance hierarchies. Ants neither recognize individuals nor remember past interactions, so complexity must arise out of simplicity. Jumping ants may be adding a "win-win" dynamic to the Battle Royale, which keeps the colony from forming a despotic social order. “What we have here looks like a new kind of dominance behavior,” says Clint Penick, a postdoctoral researcher at NC State and co-lead author of a paper recently published in The American Naturalist.

(Courtesy: Clint Penick) During a tournament, ants are engaged in three primary behaviors: biting, policing and antennal dueling. Every Indian jumping ant worker can lay eggs, but only if their system is turned on. When the ants bite, they lock their jaws around the head of another ant, and the winner establishes its dominance. Dopamine levels change as a result of winning or losing, with winners getting a hormone boast that will give them an edge in the next confrontation, called the winner effect. It also activates their reproductive system, while losers’ reproductive capabilities, on the other hand, shut down. As more ants drop out of the tournament, subordinate ants start policing less dominant ants that refuse to give up. Groups of five ants will restrain challengers in “policing balls” for up to two days — enough time to bring the hormone high down and "shut that whole thing down." “These subordinate ants are sort of going around choosing their ‘leaders’,” says Penick. “Once you’re policed, you won’t be mating.” But the third behavior, antennal dueling, is what intrigued researchers. When two ants slap each other with their antennas, it isn’t clear if there’s or a loser. It’s also the behavior that kicks off the tournament, and Penick and his team believe antennal dueling benefits both ants by pumping them up and getting those hormones flowing. “Antennal dueling allows both competitors to get a slight winner effect,” says Penick. “There’s something about this aggression that triggers changes faster, activates their reproductive systems. “It’s like football players head-butting each other before a game. They’re building up their energy.”

With the three distinct behaviors in mind, Penick and company plugged them into a computer model to predict dominance outcomes if one or more is absent. Their model was informed by over two decades of work, started by Penick’s former advisor, on H. saltator behavior.

(Courtesy: Clint Penick) When ants only bit each other in the model, for example, a linear hierarchy emerged — a bureaucratic structure with, say, a CEO at the top, and power filtering by rank down to the intern. When policing and biting were present, a despotic hierarchy emerged — a single ant on top, with all other ants sharing the same rank. Linear and despotic hierarchies are the most common arrangement in other ant species. But toss "win-win" antennal dueling into the mix with policing and biting behaviors, and a shared dominance hierarchy emerges. Interestingly, ant species that don’t engage in dueling behaviors do not have multi-leader hierarchies.

A worker-turned-gamergate gets to the task of laying eggs. (Credit: Clint Penick) Penick thinks this winner-winner behavior is novel, and may be key to shaping not only ant hierarchies, but other groups throughout the animal kingdom. What a win-win behavior looks like in, say, a pack of wolves isn't clear, but Penick thinks it's something to start keeping an eye out for. “Higher cognition certainly plays a role in shaping the societies of many vertebrates, but we think the presence or absence of winner-winner behaviors may be an important factor in determining the nature of dominance hierarchies for a wide variety of species,” says Penick.