Inside a Scorpion's Desert Haven

Biologists use molten metal and 3-D modeling to uncover how large-clawed scorpions build homes in a harsh climate. 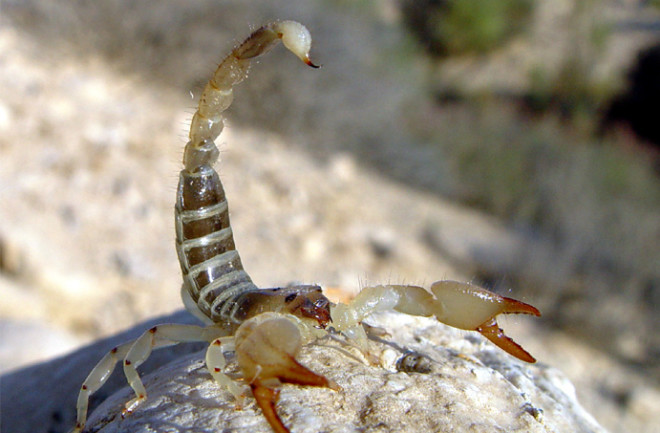 Sign up for our email newsletter for the latest science news
(Credit: Guy Haimovitch/Wikimedia Commons)

Scorpions may call to mind snapping pincers and a venomous sting, but these ancient arthropods are far from invincible. To survive in harsh environments and evade predators like lizards and owls, many scorpions spend most of their time hunkered in their underground burrows.

To learn more about the scorpion’s retreat, physiological ecologist Berry Pinshow of Israel’s Ben-Gurion University of the Negev focused on Scorpio maurus palmatus, or large-clawed scorpion, which is common in Israel. He teamed up with behavioral ecologist Amanda Adams to capture some 30 scorpions and map out their homes.

By pouring molten aluminum into the burrows and creating 3-D images of the resulting casts, the pair was surprised to find a consistent shape with sharp curves. The pattern suggests this scorpion species has evolved a simple yet highly functional blueprint for a life-sustaining burrow.

How They Did It

Casting burrows with molten aluminum can be a dangerous process. It begins with heating aluminum in a miniature gas-powered smelter to temperatures upward of 1,200 degrees Fahrenheit [1].

Next, researchers pour the molten aluminum into the burrow and let it solidify and cool for about 20 minutes. They then use a hand trowel to dig out the cast [2], which is more robust than traditional plaster casts, and carefully document the site. The result is a sturdy block of metal displaying the burrow’s intricate architecture.

Back at the lab, Pinshow’s team scans each cast to create a 3-D digital model [3]. The scanner sweeps laser beams over the aluminum cast while cameras capture the laser beams’ location to give a precise measurement of the cast. The 3-D model can then serve as a comparison for other burrows.