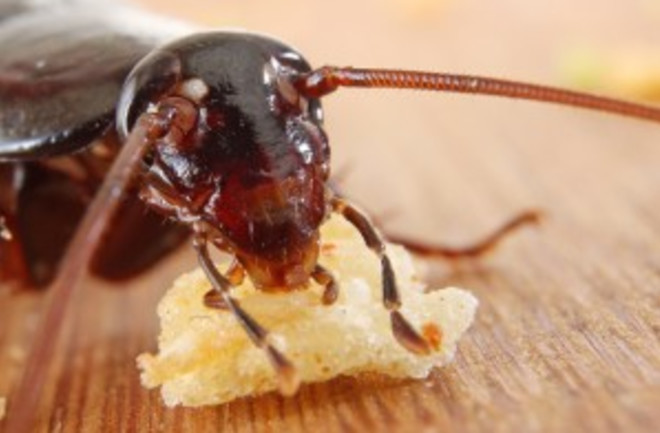 Image courtesy of Barnaby Chambers / shutterstock Insects constantly clean their antennae, even when they appear to be clean. A group of researchers decided that the phenomenon warranted a closer look, and they used American cockroaches to see what was going on. It turns out that the obsessive behavior is actually the way many insects keep their sense of smell sharp---though it may also lead to their eventual demise. Cockroaches use their front legs to stick their antennae in their mouths and essentially lick them clean. In the lab, researchers prevented the cockroaches from performing this self-cleaning ritual to see what would happen. A waxy substance accumulated on the insects' antennae, which turned out to be a mix of environmental pollutants and cuticular hydrocarbons. The latter is a fatty substance the cockroach produces as a sort of moisturizer to prevent water loss through its antennae. After just one day, the non-grooming cockroaches had amassed three to four times as much of the wax as compared to the control group. So if the cockroaches are making the moisturizer themselves, why do they need to clean it off? The researchers had a hunch that an excess of the waxy substance would diminish their antennae-based sense of smell, which the skittering bugs use to find food and mates, as well as sense danger. The researchers looked at a sensory organ on the antennae called a sensilla, which detects a sex pheromone. When exposed to this pheromone, the ungroomed cockroaches were far less responsive than their groomed counterparts. Then the researchers took a closer look at exactly how the sensilla were affected. On ungroomed cockroaches, the goop completely covered the bases and pores of the sensilla, whereas the groomed ones maintained the grooves and bases that make them sensitive. When the researchers washed the wax off completely, these grooves became even more pronounced. These sensilla are the "nose" through which a cockroach sniffs its surroundings, so having too much wax is kind of like having a stuffy nose.

Electron microscopy images of ungroomed, groomed and hexane-washed cockroach antennae. The cuticular hydrocarbons cover the surface and base of sensilla in the lefthand column, whereas the sensitive grooves remain visible in the groomed sensilla in the middle column and are even more pronounced in the washed sensilla in the righthand column. Image courtesy of NC State University The researchers tested other insects which use different grooming techniques to see how they compared. Carpenter ants, houseflies and German cockroaches all showed the same results: clean antennae was key to the insects' ability to interact with their environment. Knowing how insects clean themselves could improve insecticide application methods, the researchers reported Tuesday in the Proceedings of the National Academy of Sciences. Instead of trying to penetrate insect armor with strong chemicals, one need only apply a fine dust or mist to their antennae. Then in their quest to keep clean, the insects will ingest the chemicals all on their own.