Ingentia Prima: A Dinosaur Making It Big On Its Own Terms 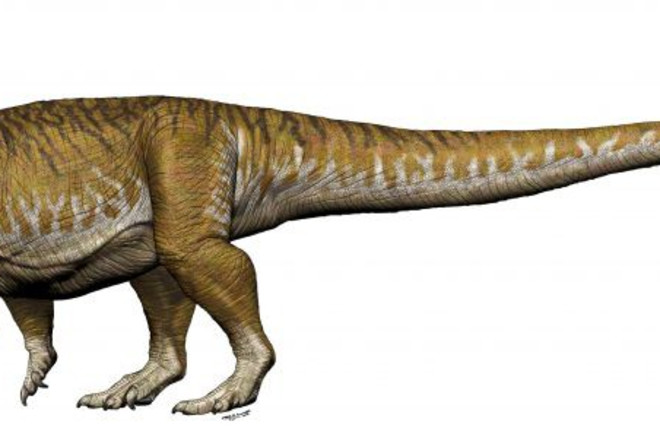 Ingentia prima, which lived more than 200 million years ago during the Late Triassic, heralded the gigantic dinosaurs that followed. Researchers say I. prima's surprising anatomical traits reveal there is more than one evolutionary path to greatness. (Credit: Jorge A. González) Before their lineage reached its pinnacle, pun intended, with enormous, aptly named titanosaurs, the sauropodomorph dinosaurs — best known as those long-necked, whip-tailed, four-legged herbivores — started small. The sheer size of the later behemoths of the Jurassic and Cretaceous worlds have made many of us puny humans wonder how they got so big. Paleontologists thought they had it figured out. But new Triassic fossils from Argentina say hang on, there is more than one way to go big, and our lineage did it first. Sauropodomorphs emerged soon after the very dawn of dinosaurs, in the Triassic Period, more than 230 million years ago. At first they were two-legged, lightly built plant-eaters, but eventually they evolved into the largest animals ever to walk on land, no doubt each step a seismic event. Some of the biggest, the titanosaurs, checked in at an estimated 70 tons. We have nothing to compare that with today in terms of terrestrial animals, and the ways these giants achieved their size has been a topic of much research (some of which was reported in the very first Dead Things post). For years, most paleontologists have believed that a suite of specific anatomical traits evolved in later sauropodomorphs to allow for gigantism. For example, their elongated necks, not present in the earliest, smallest members of their lineage, contained air sacs that allowed the massive animals to avoid overheating. Likewise, the proportions of their upright limbs supported their sizable bodies, and unusual, acyclical bone growth meant they could get very big, very quickly. A new dinosaur from Argentina, however, suggests that getting big was possible without all the physical features of later sauropodomorphs, which are known eusauropods. The First To EmbiggenIngentia prima hails from the Late Triassic, about 205-210 million years ago, and its name literally means the first biggie. The animal, about 30 feet long and weighing up to 10 tons, would have been short stuff next to the later titanosaurs, but it was considerably larger than other early sauropodomorphs. I. prima was not, however, a eusauropod. It lacked a number of the anatomical features that researchers believed were necessary to grow to epic lengths, including upright, column-like limbs and an extremely long neck. What I. prima did have, however, is actually even cooler. The team behind the new research, in addition to describing I. prima formally for the first time, analyzed three new specimens of its previously discovered close relative, Lessemsaurus sauropoides. The animals, along with a third previously described species, are considered lessemsaurids, a lineage that split off on the sauropodomorph family tree before the eusauropods evolved. Although I. prima and the other lessemsaurids lack the extreme neck elongation seen in eusauropods, they did have pneumatic structures in their vertebrae, a feature that points to an advanced, avian-like respiratory system that was ahead of its time and assisted with thermoregulation. I. prima's limbs were also bent rather than columnar and lack many of the adaptations seen in the eusauropods that came later — traits that many paleontologists believed were necessary to be super-sized.

A close-up cutaway illustration of I. prima shows the lungs in brown and cervical air sacs, a respiratory system similar to that of birds, in green. (Credit: Jorge A. González)Bone Growin' Blitz Perhaps the most remarkable thing about I. prima is buried in its bones. The team behind today's study were able to compare bone growth in the new fossils with those of an even earlier (and much smaller) sauropodomorph as well as a later eusauropod. The bone growth of the earliest and smallest of the trio was cyclical — think of it as growth spurts. The eusauropod, however, grew acyclically, pretty much growing, growing, growing throughout its life. Then there were the lessemsaurids. Their bones grew in spurts like the earlier, smaller sauropodomorphs. But when they were in a growth phase, they really grew. The researchers identified a growth rate 2-3 times that of the already impressive rate of the later eusauropods. Thanks to those incredibly accelerated bone growth cycles, an ahead-of-its-time respiratory system and unique limb adaptations to bear more weight, I. prima and its lessemsaurid relatives represent, say the authors, the first "pulse toward gigantism in dinosaurs" — and they did it their way. The research appears today in Nature Ecology & Evolution.