From a young age, children learn about the sounds that animals make. But even without teaching aides like Old Macdonald's farm, it turns out that very young babies have an intuitive understanding of the noises that humans, and even monkeys, ought to make. Athena Vouloumanos from New York University found that at just five months of age, infants match human speech to human faces and monkey calls to monkey faces. Amazingly, this wasn't a question of experience - the same infants failed to match quacks to duck faces, even though they had more experience with ducks than monkeys.

Voloumanos worked with a dozen five-month-old infants from English- and French-speaking homes. She found that they spent longer looking at human faces when they were paired with spoken words than with monkey or duck calls. They clearly expect human faces, and not animal ones, to produce speech, even when the words in question came from a language - Japanese - that they were unfamiliar with. However, the fact that it was speech was essential; human laughter failed to grab their attention in the same way, and they didn't show any biases towards either human or monkey faces.

More surprisingly, the babies also understood the types of calls that monkeys ought to make. They spent more time staring at monkey faces that were paired with monkey calls, than those paired with human words or with duck quacks. 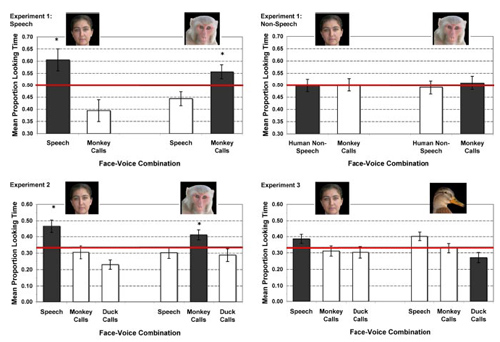 That's certainly unexpected. These babies had no experience with the sight or sounds of rhesus monkeys but they 'got' that monkey calls most likely come from monkey faces. Similarly, they appreciated that a human face is an unlikely source of a monkey call even though they could hardly have experienced every possible sound that the human mouth can make.

Perhaps they were just lumping all non-human calls and faces into one category? That can't be true, for they would have matched the monkey faces to either monkey or duck calls. Perhaps they matched monkeys to their calls because they ruled out a link to more familiar human or duck sounds? That's unlikely too, for the infants failed to match ducks faces to quacks!

Instead, Vouloumanos believes that babies have an innate ability to predict the types of noises that come from certain faces, and vice versa. Anatomy shapes the sound of a call into a audio signature that's specific to each species. A human vocal tract can't produce the same repertoire of noises as a monkey's and vice versa. Monkeys can produce a wider range of frequencies than humans can, but thanks to innovations in the shape of our mouth and tongue, we're better at subtly altering the sounds we make within our narrower range.

So the very shape of the face can provide clues about the noises likely to emerge from it, and previous studies have found that infants are very sensitive to these cues. This may also explain why they failed to match duck faces with their quacks - their visages as so vastly different to the basic primate design that they might not even be registered as faces, let alone as potential clues about sound.

Either way, it's clear that very young babies are remarkably sensitive to the sounds of their own species, particularly those of speech. The five month mark seems to be an important turning point, not just for this ability but for many others. By five months, they can already match faces with voices on the basis of age or emotion, but only after that does their ear for voices truly develop, allowing them to tune in to specific voices, or to the distinct sounds of their native language.