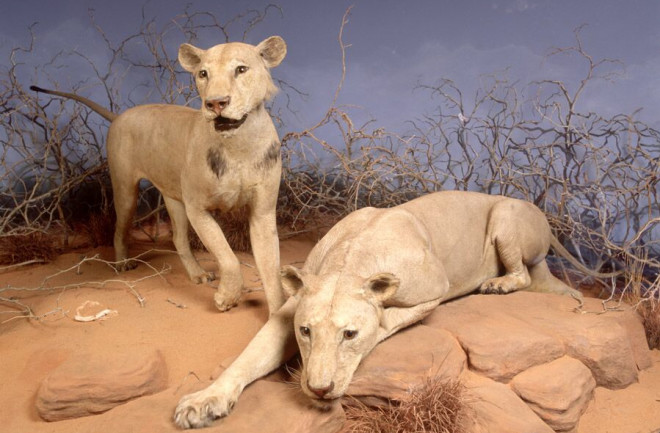 What's left of the notorious lion duo known as the man-eaters of Tsavo now resides at Chicago's Field Museum. (Credit John Weinstein, The Field Museum) The man-eaters of Tsavo, two lions that killed railroad workers in Kenya more than a century ago, have inspired legends, movies and a lot of research papers trying to explain what drove the big cats to prey on humans (a rare menu choice for Panthera leo). A study out today finds that, in one crucial way, the infamous killers were a lot like — surprise — zoo animals. For years, the true story of the man-eaters of Tsavo has been embellished and exaggerated, most recently in the 1996 movie The Ghost and The Darkness. Historically, what we know for sure is that over a nine-month period in 1898, two maneless male lions (maneless being the status quo for lions in the area) killed several workers constructing a new railroad in Kenya. Their acquisition of Unhappy Meals came to an end when both were shot and killed by Lt. Col. John Henry Patterson, who years later sold their skulls and skins to Chicago's Field Museum, where they are now on display.

Lt. Col. John Henry Patterson strikes a pose beside the body of one of the man-eaters in 1898. (Credit Wikimedia Commons) The actual number of victims is disputed: According to official records, it was 28, but Patterson claimed it was 135. In 2009, isotopic analysis of the lions' hair, which stores long-term dietary information, suggested that one lion ate about 24 people, the other 11 during their final nine months (for a total of 35 if math is not your thing), though manflesh represented only about 30 and 13 percent of their diets, respectively. If you don't want to read the original paper on that, check out the Field's story on the research. But the biggest question about the Tsavo Two remains: Why? Lions don't usually hunt humans — they will typically hide or flee in the face of human activity. What made the Tsavo Two so different? Local lore and Hollywood, of course, decided it must be that the dastardly duo were evil, or supernatural, or some combination thereof. Science started with a simpler premise: “Any predator is always hungry and looking for its next meal,” says Bruce Patterson, co-author of the new study and the Field's curator of mammals. A Lion's Gotta Eat Researchers have proposed a number of theories over the years that might explain what drove the animals to attack and eat railway workers. One of the most frequently cited suggests it was because their natural prey supply all but dried up — the result of a two-year drought plus an outbreak of the infectious disease rinderpest, which was particularly devastating for the local buffalo population. Another theory proposed that lions in the area might have developed a particular taste for humans long before the railroad project arrived. The tracks followed an old slave trade route that had been used for centuries, and sick or dead slaves simply left behind would have provided easy pickings for the big cats. Take one look at the skull of the Tsavo lion that was particularly fond of manwiches and you can see another explanation for what might have been at the root of the rampage.

You don't have to be a dentist to see what's wrong with the chompers of one of the Tsavo lions: his lower right canine is broken, and has a root-tip abscess that affected his ability to hunt, as well as his choice of prey. (Credit Bruce Patterson, The Field Museum) The animal's lower right canine was broken, with evidence of a painful root-tip abscess. It would have made delivering the kill bite to typical prey impossible — the main reason, say some researchers, the lion started going after thin-skinned and relatively helpless puny humans. An earlier, broader study of lion chompers found that about 40 percent of the animals examined had dental damage, including broken teeth and exposed pulp. Such wear and tear is normal for the big cats as they age, but rarely gets as bad as what we see in one of the Tsavo lions. First Impressions Despite the severity of the lion's damaged tooth, not everyone was signing on to the theory that it led to hunting humans. After all, in Patterson's accounts of the marauding mammals, he mentioned the animals crunching the bones of their victims within earshot of the camp. Bone-crunching behavior in lions smacks of desperation — the sort you might find in an animal in dire need of food due to a lack of its natural prey. Enter today's study, published in Scientific Reports. For the first time, researchers created molds of the Tsavo lions' teeth using a technique that allowed them to make casts with such high resolution that they could study microscopic wear. What they found is a shocker: when it comes to microwear, the Tsavo Two's teeth were remarkably similar to that of lions living in zoos. These lions are typically fed a softer diet, no bone-crunching required. The researchers compared the Tsavo lions' dental microwear with previous results from other lions (which are typically generalist carnivores, eating fresh meat when they can and scavenging when they have to), as well as cheetahs (meat only, thanks) and hyenas (they'll eat the whole dang animal, bones and all) and found no indications that the infamous man-eaters were desperate enough to scavenge. The microwear pattern suggests then that it wasn't desperation that drove the Tsavo lions to nosh on humans, but perhaps convenience. The railroad workers, most of whom came from lion-free South Asia and were unfamiliar with local ways to avoid being eaten, were simply easier for a dentally-challenged lion to catch and kill than faster, tougher-skinned buffalo, antelope and zebra. Predation, Bro-Style As for why the second lion also ate humans, despite having only minor damage to its teeth, Patterson believes it was a social thing. Male siblings and cousins of the same age form coalitions (or perhaps bro-alitions) that stick together, making Man-Eater #2 "guilty by association." “Lions so rarely go after people," says Patterson. He notes that there are about 20,000 lions in Africa and that, when their paths cross with humans, "99.99 percent of the time they choose to go the other way. When man-eating happens it’s really sort of a pathology.” And that, not supernatural evil, is what makes the man-eaters of Tsavo so intriguing for scientists and the public alike. Says Patterson: “When one of these pathological events happens, it resets our whole appreciation of nature. We’re reminded we’re not on the top of the food chain.”