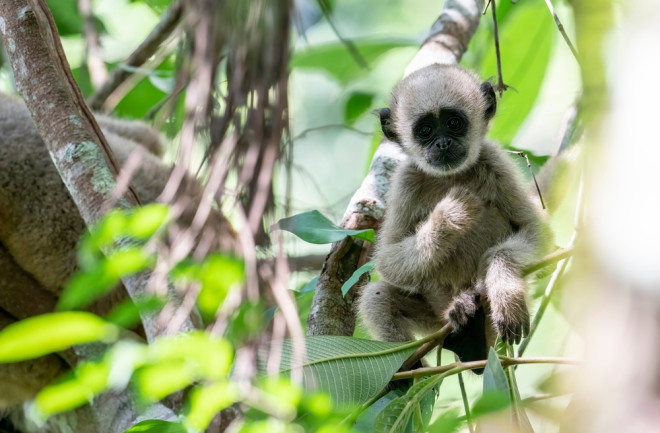 The northern muriqui, the black-capped capuchin and the munduruku marmoset are only a few of today’s 500-or-so primate species. Yet, these three animals all share a range in South America that intersects with the territories of Indigenous peoples.

Science suggests that this intersection makes sense. In fact, scientists recently revealed that Indigenous lands frequently have higher levels of primate biodiversity. Published in Science Advances, the research also revealed that the non-human primates living inside these territories face the threat of extinction less often than those living just outside of them.

A Prime Part of the Forest

“Most primates exploit forests, where they serve as agents of pollination and seed dispersal,” says Paul Garber, an anthropologist at the University of Illinois Urbana-Champaign, in a press release. “They play a very important role in the regeneration of forests.”

They’re also crucial players in predator-prey relationships. They consume all sorts of insects and small vertebrates and a variety of carnivorous creatures, including other primates, consume them.

That said, in the face of their importance, primate populations are threatened all around the world. “There is an impending extinction crisis among the world’s 521 primate species,” Garber says in a press release. “We know that 68 percent of these species are vulnerable […] and many of them may not survive to the end of the century.”

Aspiring to reverse these stark projections for the future, Garber and a team of scientists studied the influence of land use in supporting primate biodiversity. Their studies showed that how Indigenous peoples use the land corresponds with an increase in its overall diversity of primates, a fact which could inform future conservation efforts.

The team reviewed the available research and carried out a spatial analysis to compare people’s use of land and primate’s diversity. Ultimately, the researchers wrote that Indigenous areas “account for 30 percent of the primate range, and 71 percent of primate species inhabit these lands,” according to a press release.

Proposing several potential reasons for this pattern, the team says that Indigenous populations tend to participate in practices that aid in the preservation of primates. “There are many different Indigenous peoples, and they exploit their environments in different and multifaceted ways,” Garber says in a press release. “While many groups hunt primates, they also hunt pigs, ungulates, rodents, birds and fish. They gather forest resources including medicinal plants. They have gardens, employ methods of shifting cultivation and engage in herding.”

This variety of resources may prevent their overreliance on primates and could assure that the nearby primate populations remain strong. Additionally, the study authors propose that Indigenous populations sometimes maintain traditional ties to these primates and are therefore less likely to injure their populations.

“Indigenous groups have various prohibitions based on their knowledge, culture or religion,” Garber says in a press release. “We cite several cases, for example, where a species of primate may only be hunted for a particular festival. Or a particular primate species is not hunted when fruit is overabundant in the forest, allowing those populations to get into reproductive condition and produce offspring.”

The authors caution that there are some exceptions to this trend and that the trend alone does not prove that Indigenous populations support primate diversity directly. But the authors also conclude that “safeguarding Indigenous peoples’ lands, languages and cultures represents our greatest chance to prevent the extinction of the world’s primates,” according to a press release.