A rediscovered tiny potato may hold secrets that could help science develop plants better suited to a changing climate. 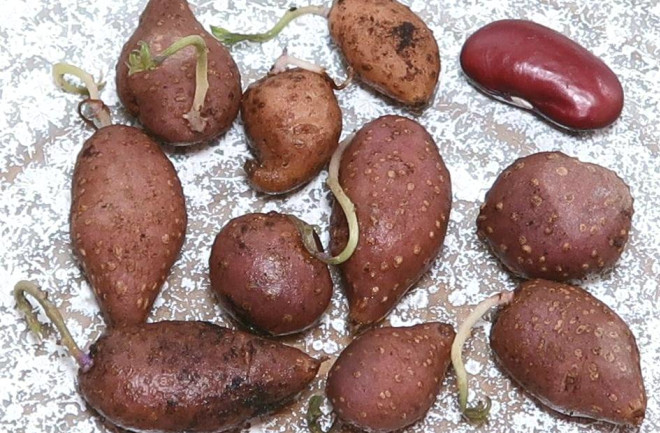 When you think about the diets of ancient Indigenous peoples of North America, you likely think squash, beans and corn — the famous three sisters. Potatoes probably don’t come to mind. But recent archaeological research has found that at least one potato was a part of North American diets thousands of years ago.

In 2010, University of Utah anthropologist and archaeologist Lisbeth Louderback found what looked like potato starch on ancient stone tools from a dig site in Escalante, Utah. In 2013, a particularly good monsoon year, Bruce Pavlik, Director of Conservation at the University of Utah's Red Butte Garden, recognized a tuber growing wild near the same site, and the team was able to identify the starch. It was from Solanum jamesii,  also called the Four Corners potato, a potato native to the Four Corners area of the Southwestern United States. Though the potato grows wild in the area, this was the first time it was found at the site of a prehistoric settlement – making it the earliest evidence of potato use in North America, dating back almost 11,000 years.

Louderback and Pavlik set out to learn more about the potato’s history and reintroduce it to the modern diet. Pavlik stresses, however, that he and Louderback did not “discover” the potato. It was long known to the Indigenous people of this area, including the Apache, Hopi, Kawaik, Navajo, Southern Paiute, Tewa, Zia, and Zuni peoples. Because the potato doesn’t produce shoots until the summer rains start, it was harvested less in the 19th century, when monsoons diminished over the decades, and gradually fell out of favor. At the same time, it also faced stiff competition from the common white potato, which flooded the market.

The Four Corners potato is tiny; a dozen of them can fit in the palm of your hand. But it packs a lot of nutrition for its size, with twice the protein, zinc and manganese, and three times the calcium and iron of Solanum tuberosa, the potato that will grace most of our Thanksgiving tables this week. But its value to the Indigenous people who gathered it went beyond food. It’s an important medicine and a part of Indigenous religious ceremonies.

It’s also a tough little spud. Solanum jamesii is both disease resistant and frost tolerant. It’s drought resistant, too, a characteristic that’s becoming increasingly important because of climate change. In periods between rains, the tubers remain dormant. It can survive this way for up to 16 years, if necessary, until a good monsoon season comes along. “You can span bad years by having this bank of tubers in the ground,” says Pavlik, “just like a seed bank, but this would be a tuber bank.”

Louderback and Pavlik are working with indigenous communities to return the potato to its original stewards. They use the term “re-matriation” because the women of the tribe were typically the ones who did the gathering and processing, Louderback says. This year, about 30 farmers are raising the potato, mostly on tribal lands.

Indigenous people get first dibs — after all, it’s their potato — but this super potato could soon find its way to many more tables. One non-Indigenous farmer is already growing it to supply restaurants. Eventually, Pavlik hopes, it will be widely available in supermarkets as well as restaurants.

The importance of the Four Corners potato goes beyond its use as food. Its genes are valuable, too. Pavlik explains there are more than 100 species of potato, and the USDA potato gene bank cross-breeds these species to help make them more resistant to disease and drought. Plants in the wild have genetic diversity, and scientists call on that to create more drought-resistant plants or plants that can produce more food using fewer resources, Pavlik explains.  “So this potato is being used, as we speak, to create new forms of potatoes."

Finding and reintroducing traditional foods is also important because it’s not wise to rely on just a few species or one type of crop; a disease or fungus could wipe out an entire species, explains Pavlik. "Diversifying,” he says, “is really a way of saving the future of our food base.”

And if all that weren’t enough to make Solanum jamesii a hero, it tastes good, too. Louderback says it has an earthy taste, soft on the inside with a crunchy skin. “We put it in soup,” she says, but adds that it would also be good with butter, salt and pepper as a side.