Helping us to see beautiful — but also unsettling — patterns of tiny aerosols, the visualization shows swirling, pulsing patterns of desert dust, pollution particles and even sea salt blowing through the atmosphere. 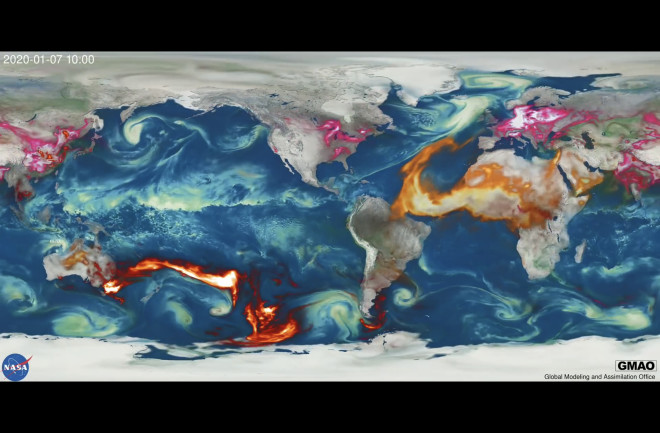 Screenshot from an animation showing the movement of aerosols in the atmosphere between August 2019 and January 2020. (Source: NASA)

Blown by the wind, pulses of Saharan dust surge out over the Atlantic. Plumes of noxious smoke from raging Australian and Siberian wildfires manage to girdle the entire globe. And, perhaps most interestingly, clouds of sea salt sucked up into hurricanes and typhoons spiral across ocean basins within the cyclonic structure of these storms.

All of that, and more, is visible in this beautiful, yet also disturbing, visualization created by NASA:

Produced by a model that relies on the observations from several satellites, the visualization shows aerosols — tiny droplets and solid particles — as they move through the atmosphere. In addition to smoke, desert dust, and salt from sea spray, these aerosols can come from volcanic eruptions, air pollution from human activities and other sources.

The colors in the visualization are keyed to different kinds of aerosols moving through the atmosphere between March 2019 and mid-January of this year.

At the start of the visualization, firelike eruptions, portrayed in bright red, orange, yellow and white, stream to the east over Siberia. These are smoke aerosols from wildfires ravaging large parts of the region. Prominent smoke is also evident over South America and Africa — and, later, over Southeast Asia in September.

The first hints of smoke from Australian wildfires turn up in October, with pulses of activity strengthening through November and December and then exploding in January. You can watch as some of the smoke makes its way all the way around the world.

Greenish colors in the visualization reveal sea salt being entrained in swirling cyclones. Waves catapult salt particles into the air, where they can serve as the nuclei around which water droplets condense, forming clouds.

Among the cyclones visible in the visualization is Hurricane Dorian, which first pops up just north of South America on Aug. 24. The storm then gains strength and cuts a path of destruction from the Caribbean to the Canadian Maritimes. Along the way, it maintains Category 5 strength for almost two days, devastating the northern Bahamas and tying for the strongest Atlantic landfall on record.

Gold colors help us visualize dust blowing west above the Sahara in North Africa and out over the Atlantic Ocean. The shapes traced out by these dust plumes reveal complex circulation patterns in the atmosphere, influenced in part by storms like Dorian.

Pink colors are indicative of nitrate aerosols. A substantial fraction of these compounds ultimately comes from chemical reactions in the atmosphere involving pollutants.

Aerosol particles in the atmosphere affect our planet's life-support systems, most especially climate and weather. Some aerosols cool the atmosphere by blocking energy from the sun. Others cause warming by a process involving absorption of incoming solar energy, and can also reduce humidity, thereby tamping down rainfall. By serving as the nuclei around which cloud droplets can form, some kinds of aerosols have the opposite effect — they amp up rainfall.

The influence of aerosols remains one of the greatest uncertainties in climate research. The combination of modeling and observations embodied in the visualization of aerosols seen here holds the promise of reducing those uncertainties.