In Makira, Flying Fox Teeth Are Currency...And That Could Save the Species 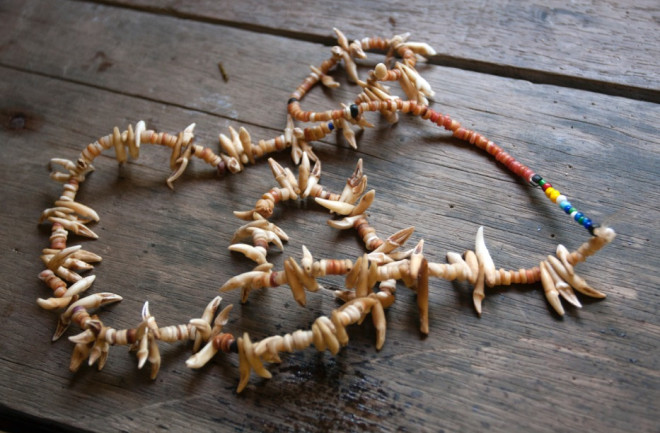 An example of how flying fox teeth are strung together into necklaces. (Credit: Tyrone Lavery, The Field Museum) On the island of Makira, hunters use the teeth of giant bats known as flying foxes as currency. Now, perhaps paradoxically, researchers suggest this practice could help save these bats from potential extinction. The giant tropical fruit bats known as flying foxes are the largest bats in the world. Of the 65 flying fox species alive today, 31 are under threat of extinction, and 28 of these threatened species live on islands. Makira is one of the Solomon Islands, which lie roughly a thousand miles northwest of Australia. Makira is home to two types of flying foxes — the bigger Pacific flying fox (Pteropus tonganus), a common species that is not endangered, and the smaller Makira flying fox (Pteropus cognatus), which is threatened with extinction.

A flying fox fruit bat, Pteropus tonganus, from the Solomon Islands. (Credit: Tyrone Lavery, Field Museum) "It's pretty amazing when it's getting towards dusk and you're sitting next to the shore and you see these massive bats come gliding over the ocean," said mammalogist Tyrone Lavery of the Field Museum in Chicago. "It's just fascinating—you don't know where they're going or where they're coming from, and it makes you really marvel and wonder at them." While investigating the diverse array of animals found in the Solomon Islands, Lavery discovered that on Makira, flying fox teeth were strung together in necklaces that were used as currency. Although modern currencies are commonly used to pay for day-to-day goods and services on the Solomon Islands, many societies there still use various forms of traditional currency, such as dolphin teeth or disks made from shells, for important cultural practices, such as paying for weddings. In a number of Pacific Islands outside of the Solomon Islands, hunting has drastically reduced flying fox populations. To see how the Makiran custom of using bat teeth as currency affects the flying fox populations, Lavery and his colleague John Fasi, a scientist at the University of Queensland in Australia who is originally from Makira, questioned 197 residents of the island about the bats. "Doing this study was fun—people think you are crazy to be asking about bats," Fasi said. "They see how abundant the bats are in the wild and have no knowledge that they are threatened." The scientists found that Makirans of all ages hunted the bats, primarily targeting the larger flying foxes, whose teeth were large enough to drill holes in and make necklaces from. They also found the main reason that bats were hunted was for their meat, an important source of protein for Makirans. Younger generations of Makirans thought the custom of using bat teeth as currency would wane. "However, we see that the use of bats as food is still going on," Fasi said. The researchers suggest that the best strategy to protecting the bats isn't simply forbidding Makirans from hunting them. In fact, they noted the bats' important role in Makiran traditions could help convince Makirans to preserve them as a species. "It's a positive, not a negative, that their teeth are so culturally valuable," Lavery said. "The practice of hunting bats shouldn't necessarily be stopped, it needs to be managed sustainably." Conservation efforts for Makiran bats could include suggesting that hunters avoid targeting bat roosts, as well as setting aside protected areas in regions of Makira that already have low hunting. In addition, since bats are one of the few sources of protein on the island, finding new protein sources for Makirans could reduce dependence on bat meat. The scientists detailed their findings online Oct. 9 in the journal

Protecting the flying foxes of Makira will help protect the island's environment overall, Lavery aid. "The bats are hugely important for health of Makira's whole ecosystem," he explained. "The Pacific islands are exposed to hurricanes, which can destroy forests; fruit bats spread seeds that help forests regenerate."