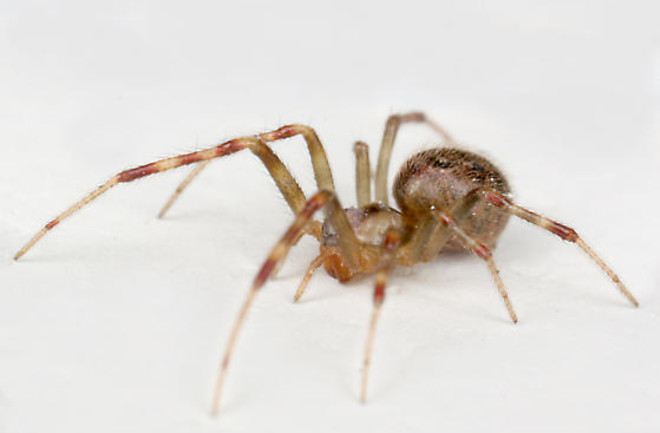 Anelosimus studiosus spider. Image courtesy of Jonathan Pruitt/Ecology Letters. To an arachnophobe they may seem universally creepy, but spiders can actually be nice. One strange species of spider, Anelosimus studiosus, consists of individuals of two distinct personalities: docile and aggressive. And new research finds that, in this species at least, nice guys finish last. A. studiosus is found in both North and South America, where it builds big communal webs housing approximately 40 female spiders. Other spider species are similarly social, but A. studiosus is the only one known to have two distinct personality types---one nice and one not so nice.

Docile spiders tend to stick closer to home when starting new colonies, and they rarely fight predators or hunt for prey. Aggressive-type spiders, on the other hand, are always looking for a fight. And when it comes time to leave the web, they venture out much further than the docile spiders. Each spider has one personality type or the other, and they pass that personality type on to their offspring. With mixed parents, baby A. studiosus spiders will still end up with one disposition or the other, not somewhere in between.

The question for biologists, then, is why would two such distinct personalities evolve and persist? To answer that, behavioral ecologist Jonathan Pruitt collected some wild female spiders in Tennessee and brought them into his lab. Here, Pruitt did some spider matchmaking. He divvied up the spiders into pairs---either two aggressive spiders, two docile spiders, or one of each. Each of the 90 pairs spun a web in the lab, which Pruitt then relocated to the wild. Half of them were coddled---Pruitt monitored them and removed invading spiders of other species---while the other half were left to fend for themselves. Pruitt monitored each of these original colonies and the colonies of their descendants over the course of five years, by which time there were a total of 607 colonies.

Anelosimus studiosus spider web. Image courtesy of Jonathan Pruitt/Ecology Letters. What he found was striking: the best spider personality depended on the prevalence of predators. When predators were around, lineages founded by docile spiders, though they produced many more babies, were eight times more likely to go extinct. These spiders spent their time reproducing instead of defending their webs, and so they were eaten by invaders or their prey was stolen from their webs. In the end, colonies started by docile pairs had entirely died out, and only a quarter of those started by mixed pairs had survived. However three-quarters of the all-aggressive colonies were still alive. In those colonies where invaders were removed, the docile spiders did just fine. Thus the presence of competitors is essentially driving the docile spiders into a lose-lose proposition (in biology lingo, an evolutionary dead end): make babies or protect the nest, but not both. Aggressive spiders, on the other hand, seem able to manage both demands at once. This ability of one species to drive another into dead-end strategies has long been hypothesized, but never demonstrated in the wild before now. The results

were published in Ecology Letters last week. So which is more of an advantage in the end: the docile spider's ability to reproduce or the aggressive spider's ability to survive? Pruitt says that either extreme can lead to extinction, so a mix is probably the best place to be. All things in moderation, spiders.